Montgomery County Public Schools (MCPS) Student Member of the Board of Education (SMOB) Eric Guerci hosted a town hall meeting with Interim Superintendent Larry A. Bowers in the Montgomery Blair High School media center on Thursday, Mar. 10. They answered questions that were submitted in advance, as well as questions asked by the Blair student audience. MCPS also filmed the town hall to post footage on their website and to live stream it throughout Blair.

Addressing a question about the most pressing issue currently facing MCPS, Bowers made sure to emphasize the achievement gap early. "It's not just an achievement gap," he said, "it's an opportunity gap. We as a system need to step up and provide the same resources and opportunities to all students." 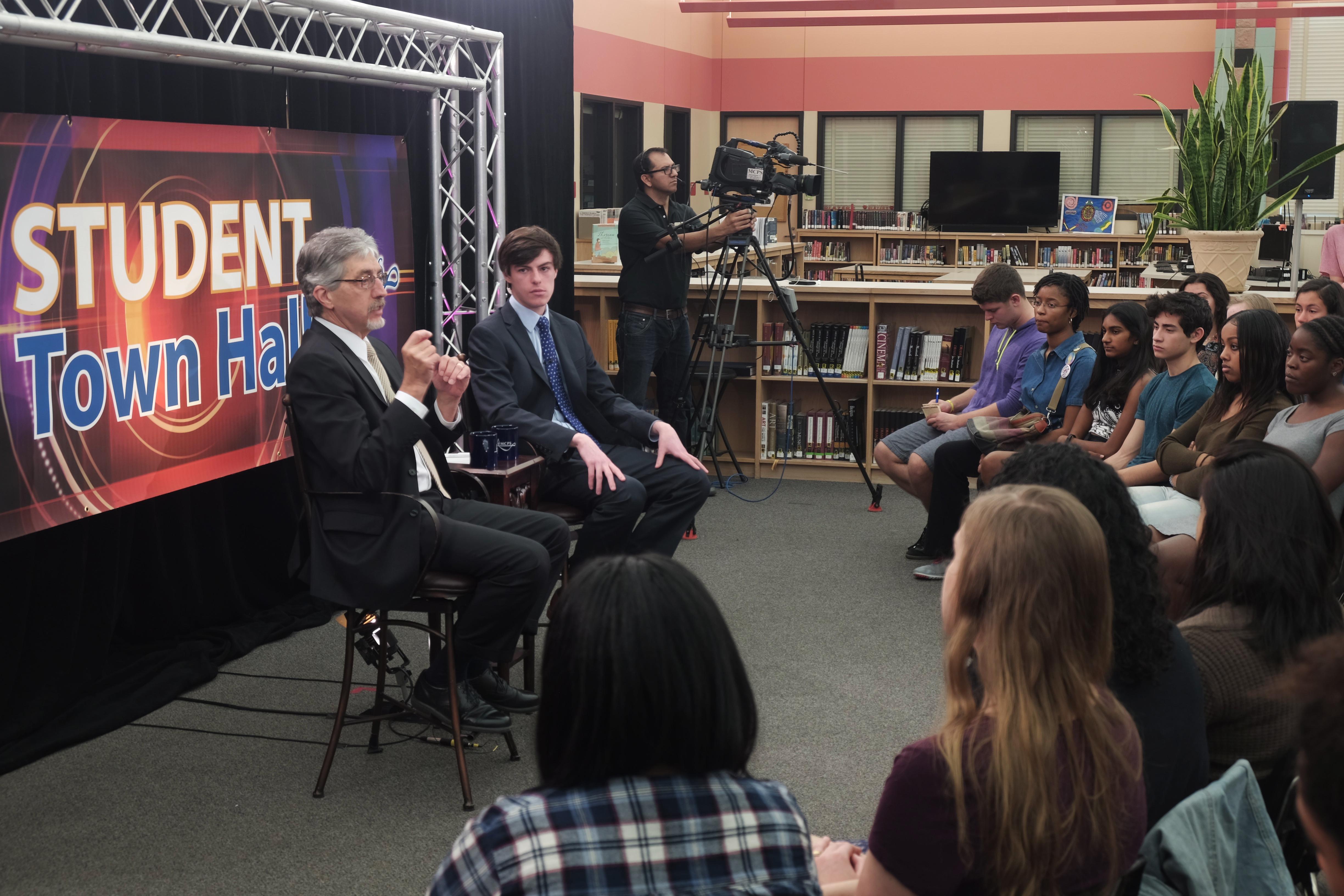 Bowers and Guerci also talked extensively about the role of technology in schools, responding to a question from senior Selvin Robles about providing access to computers for those who might not have them at home. "That is about money," Bowers said, briefly summarizing the Board's original plan to roll out Chromebooks over four years. When funding was cut after just the first year, that plan had to be revised. The goal now is to work money for Chromebooks into this year's budget, and hopefully extend their use beyond social studies classes.

After the town hall, although Robles was disappointed that classes, particularly ESOL classes, could not gain more access to Chromebooks and other technologies, but was glad that he understood why. "At least they said that the reason was about money and they mentioned ESOL students and that was good," Robles said.

Bowers also discussed diversity in special programs, as it was a recurring theme in pre-submitted questions. He explained the changing demographics in the county, but also recognized the large disparity between the racial makeup of the county and that of programs like CAP and the Blair Magnet. "In the early to mid-70s, over 90 percent of MCPS students were white," Bowers said. "Now, 30 percent of MCPS students are white." The 80s saw the creation of multiple magnet programs in middle and high school. These programs, like CAP and the Blair Magnet, commonly enroll a white and Asian majority. "We need to do some things differently," Bowers said in terms expanding diversity in special programs classes and, more broadly, in advanced placement (AP) classes. In doing so, he tied the concerns back to his initial statement about the achievement gap.

The town hall was the fourth and last of a series that Guerci has hosted, and the second in which Bowers has participated in the past few months. The previous three were held at the MCPS television studio, Rockville High School in Rockville and Kingsview Middle School in Germantown. According to MCPS Chief Communications Officer Brian Edwards, Blair High School was chosen for multiple reasons. "We wanted to mix up the geographic regions," Edwards said. "We'd never done a town hall at Blair High School so that's why we chose to do Blair this year."

According to Bowers, the series of town halls were the idea of Guerci, but are also important to give voices to students across the county. "It really is important for students to be involved, my biggest interest is to have students find ways to share their voice and to reach out," Bowers said.

Board of Education Member At-Large Jill Ortman-Fouse, who attended the town hall with Board At-Large Member Philip Kauffman and Board President Michael Durso, agreed that it was essential to hear student voices. When explaining how to address many of the school board's challenges highlighted in the town hall and how to address them, she highlighted the importance of student involvement, as well. "We need students to help advocate," she said.

Guerci said holding the town hall at Blair was different from other schools. "I think this was the most diverse range of questions we've heard at a town hall so far," he said. "Technology, the achievement gap, and bell times are the big issues. And then at Blair, since it's such a diverse community, you also have multiple social justice movements that need to be heard and discussed."

While the questions generally pertained to all of MCPS, many Blazers focused on issues that affected Blair especially. "The biggest issues we discussed today were the achievement gap, and the diversity in magnet programs," senior Zaafira Elham said. "The most important thing that was brought up was the technology and diversity gap, especially in terms of diversifying CAP and the magnet program at Blair," junior Johnny Pietanza agreed.