Students and staff at Montgomery Blair High School were evacuated from the school building at 12:28 p.m. during sixth period on Tuesday, Sept. 20. The evacuation was prompted after an anonymous call to Montgomery County 911 warned of a bomb in the school building. Montgomery County Police and Blair's security team searched the building but nothing suspicious was found. The caller was taken into police custody later that day. 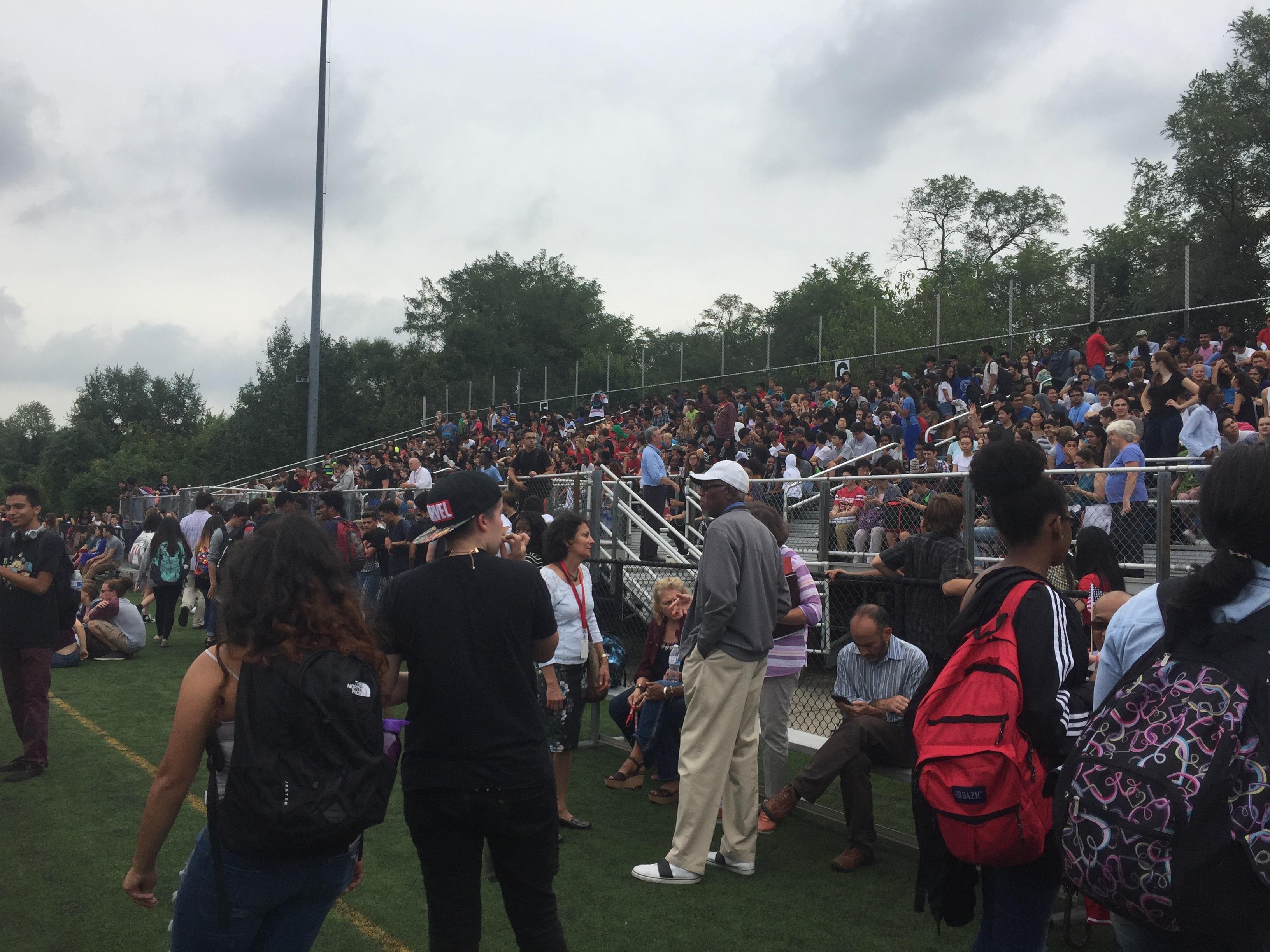 Waiting in the stadium

Photo: Staff and students wait in Blazer Stadium for the school building to be cleared for their re-entry.

Photo: Staff and students wait in Blazer Stadium for the school building to be cleared for their re-entry.

Principal Renay Johnson chose to sound the fire alarm after the Blair Student Resource Officer (SRO) notified her that an anonymous caller told 911 that there was an immediate threat to the school. "The SRO and security team leader called me in and briefed me on what happened. They said that there is a bomb in the building, they don't know if it's a credible threat or a hoax. Based on the information they gave me, I made the decision to evacuate the building because I have 3,000 kids to worry about. I'd rather be safe than sorry," Johnson said.

Johnson followed Montgomery County Public Schools' (MCPS) standard procedure for bomb threats. "Protocol is the police will come. Fire and rescue will respond to determine if they should search the building," Johnson said. Police with dogs first searched Blazer Stadium, and once it was cleared, staff and students were directed to it.
Before being allowed in the stadium, students were momentarily frenzied by a tire popping in a crash on the Beltway caused a loud noise and momentary panic. Once the source of the noise was clarified, students calmed down. 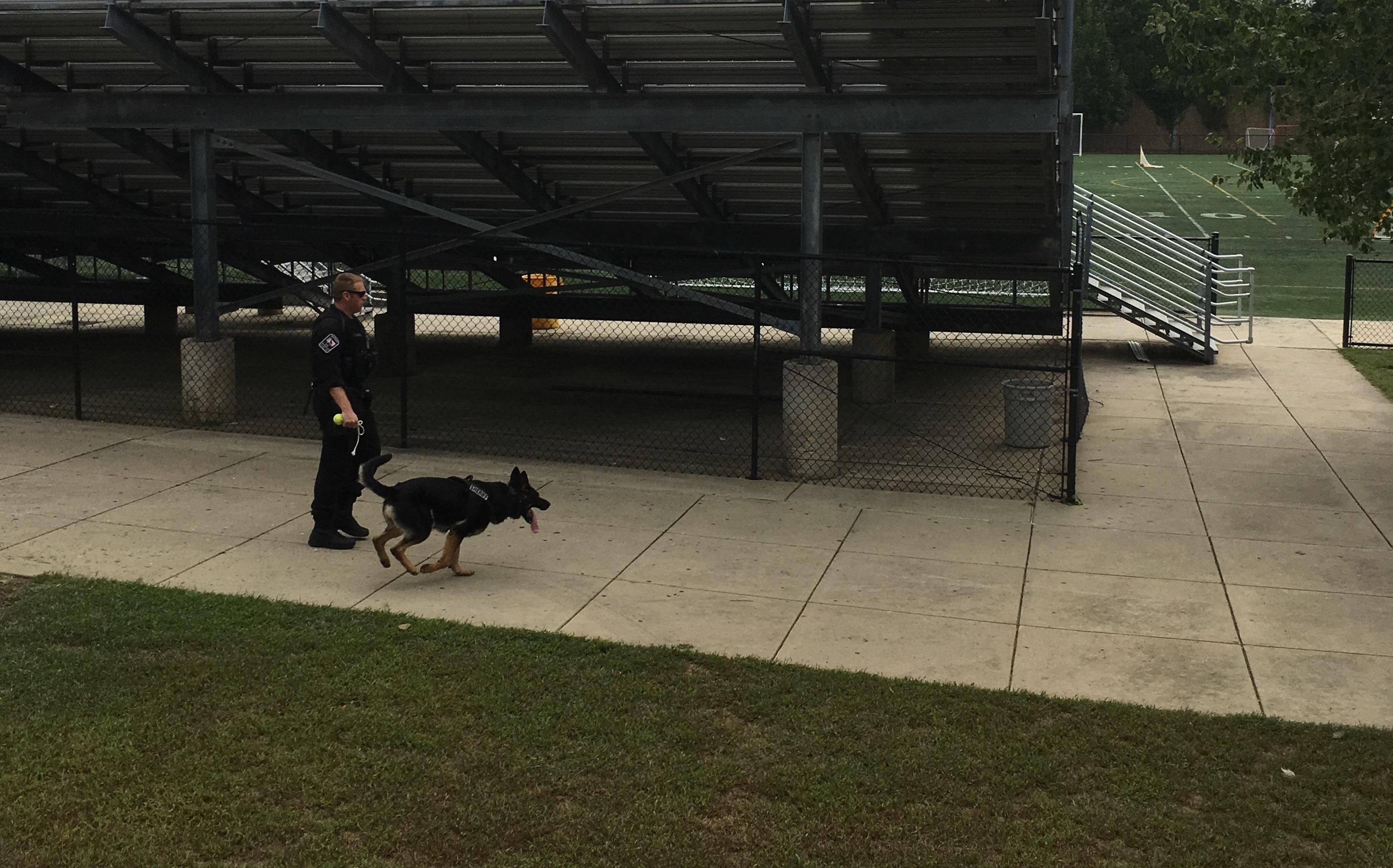 Photo: A Montgomery County Police Officer clears Blazer Stadium before staff and students are directed into it.

Photo: A Montgomery County Police Officer clears Blazer Stadium before staff and students are directed into it.

The building was cleared and students returned to class at 1:59 p.m. Once students and staff returned to the school building, instruction resumed. After-school activities at Blair were not affected by the threat.

According to Johnson, the 911 caller also warned of the presence of clowns. Over the past week, police received reports of clowns in Annapolis like those in South Carolina, but these were later invalidated. No known unsettling sightings of clowns have occurred in Maryland. Nonetheless, Johnson remained wary. "There was the clown scare in Annapolis. I had to get more information on clowns," Johnson said, "But my scare was really the bomb threat."

While students were waiting in the stadium, the police had already identified the caller's phone number. Once students returned to class, Johnson made an announcement asking for students with information about the caller to come forward. "We had students come down and they told us who they believed did it and when that young lady was called to the main office, she confessed," Johnson said. The student's phone number also matched that of the call to the 911 dispatcher.

The student is currently on ten-day suspension with a recommendation for expulsion from Johnson. The student will face a hearing with the MCPS officials removed from the situation. Although she believed that the student no longer belonged at Blair, Johnson stressed the importance of students remaining in school. "Now again, it's never my desire to have students kicked out of school forever, Blair is just not a good fit anymore. Maybe another school would be a better fit," Johnson said.