Cheering for a win

The crowd, packed into the largest gymnasium in the county, roars. Outside the gym doors, though, the cheer team is jittery and nervous. As long as no one messes up, they should be fine, but if not…Their palms are sweaty, butterflies are doing flips in their stomachs, and the group's excitement builds. Then the doors open, the crowd explodes, and out steps the Blair cheer team, full of nerves and energy, with no idea that they are about to win their division title. 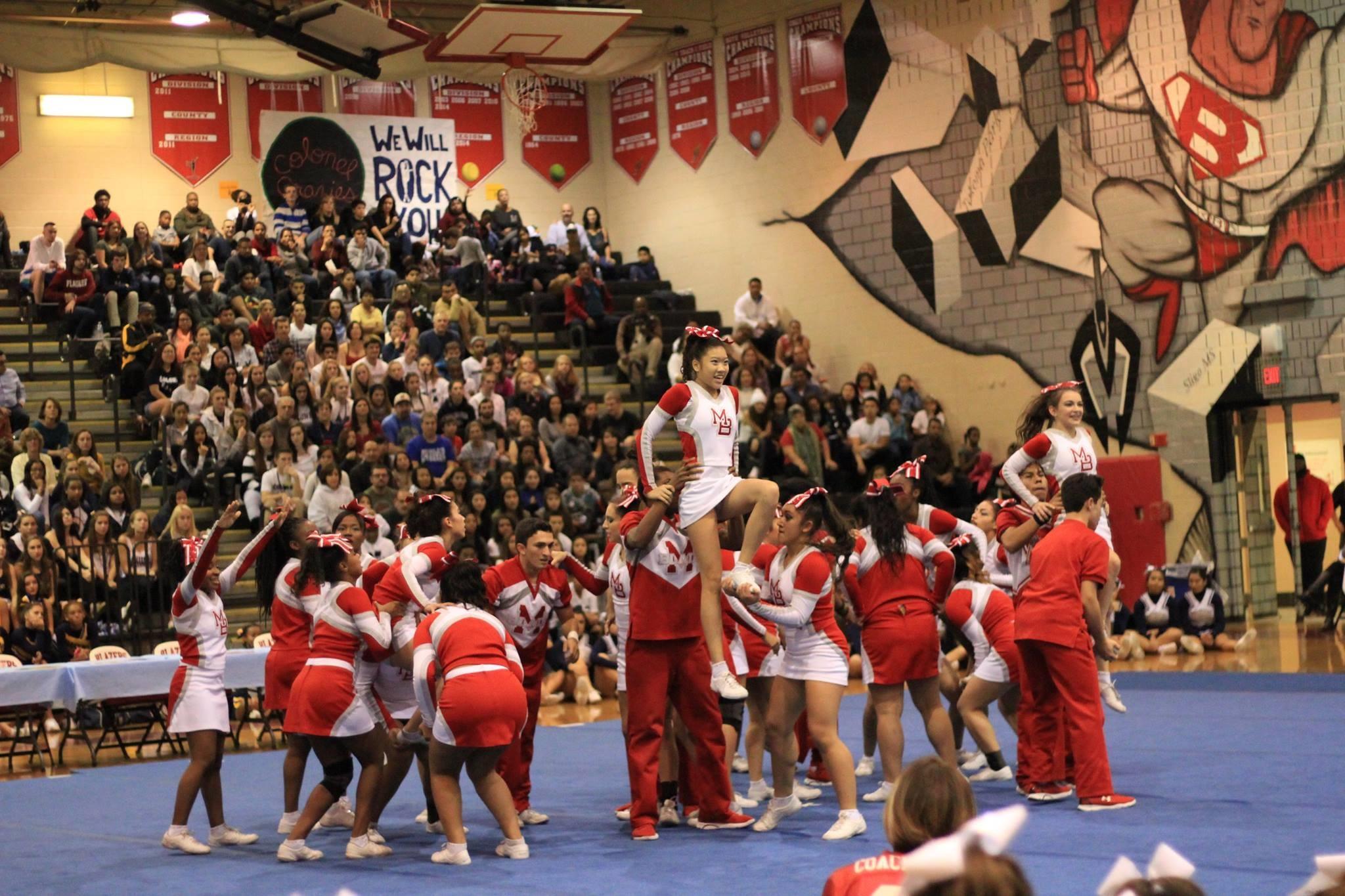 Photo: Blair cheerleaders perform their routine at the MCPS Cheerleading Competition on November 14. Blair was the only team in Division Two to not receive any score deductions.

Photo: Blair cheerleaders perform their routine at the MCPS Cheerleading Competition on November 14. Blair was the only team in Division Two to not receive any score deductions.

The cheer team, coached by English teacher Sarah Fillman and attendance secretary Roxanne Fus, performs at many events throughout the school year. They are most commonly seen at football and basketball games, but the main focus of their season is always the Montgomery County High School Cheerleading Competition. From the summer before the season through Nov. 13, the day before their competition, the cheer team practices every day, growing as a team and as individual athletes. This year they finished on top, winning first place in Division Two for the first time since 2007, and the Spirit Award for the 11th year in a row.

Coming away with a win was especially gratifying for cheerleaders who were on the team last year when the team placed sixth. Their score was especially weighted down by deductions for illegal dive rolls, a type of jump where the individual jumps forward and then lands with his or her hands on the ground, finishing with a somersault. Fillman, who added the dive rolls to the cheerleaders' routine at the last minute without realizing they were illegal, acknowledged that the team could have done better regardless. "It wasn't a great performance," she says.

After last year's disappointing loss, senior captain Edvin Espana believes that the team worked even harder. "It motivated us to do better," he says.

Fillman also began the year with a positive attitude. "Every year it's a new slate. I knew this team was really, really capable," she said. In fact, with so many experienced cheerleaders, she told the team that if there was any year that they were going to win, it would be this year.

While the cheer team's performances may make putting together and executing a routine look easy, it takes considerable effort and dedication. The team practices every day and Fillman worked hard to prepare the team psychologically this year. "I talked a lot about not only the fundamentals of each of the elements that we needed to do well in, but just sort of their approach," she says, explaining that she trains the team to think positively and approach stunts confidently.

In cheerleading, building a trusting team is especially important because each individual relies on others to perform. "Don't just think that this is your family member. You need to lift them up. Not only physically, but spiritually," Fillman tells the cheerleaders. 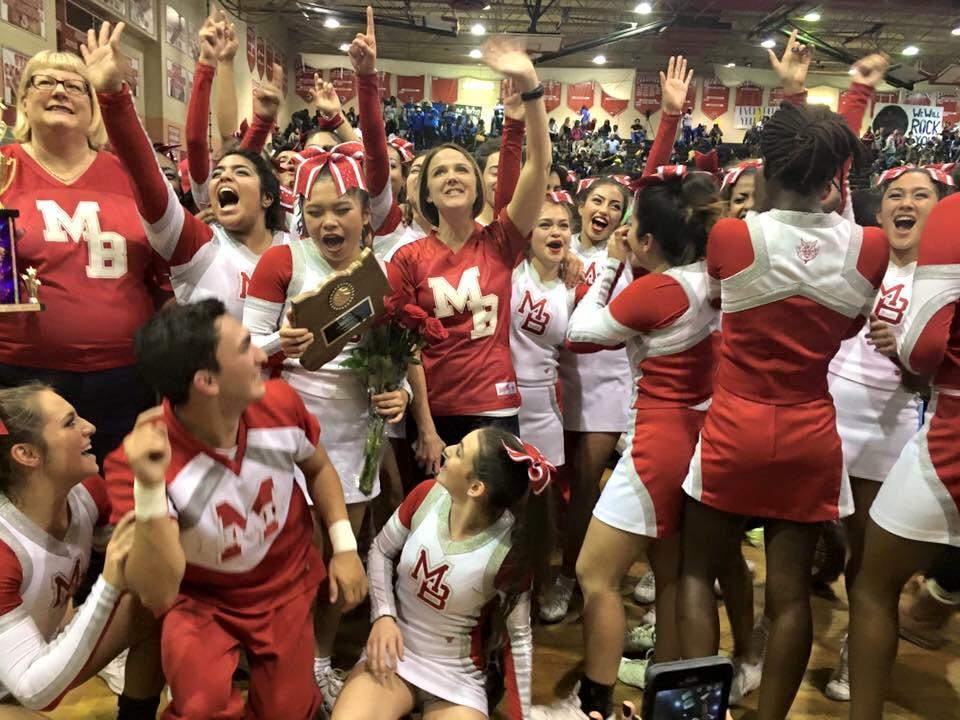 Photo: The cheerleaders celebrate after receiving their first place plaque.

Photo: The cheerleaders celebrate after receiving their first place plaque.

One way that Fillman suggests the cheerleaders do so is with constant positivity. "You need to be able to pay them compliments any time that you are around them so that they trust you and you trust them," she tells them. For many, such as Espana, the trust and friendly atmosphere of the cheer team is key because it relieves some of the pressure in such a strenuous sport. No matter what happens, "at the end of the day we're still a team, we still love each other," he says.

The team's mental training comes into play during competitions. Right before performing, the team gathers together to focus. "We sit in a circle and we talk and we discuss everything that we're doing wrong and should fix," senior captain Fridaous Djobo says. The team has also learned how to use the audience's energy as its own. "We try to feel each other in the routine and we try to feed off of the crowd's energy and also motivate ourselves to do well, and that helps us focus," Espana says.

Fillman also attributes a large part of Blair's win to its energy and focus. "We built this bond and this synergy, I think, that then came out on the mats. It wasn't that perfect routine, but nothing fell and we were the only team to not have any deductions," Fillman says.

For Fillman, the win was not only a good way to end the season, but also her career as one of Blair's cheer coaches. After 12 years of coaching, Fillman has decided that this will be her last. What with running two small businesses and being promoted to Communication Arts Program (CAP) Coordinator, Fillman finds that she will no longer have the time to coach.

Despite the upcoming change in coaching staff, however, junior Britney Chung still has high hopes for next year's season. After winning their division this year, if the Blazers place again next year they will be able to move up to Division One. "I hope we break this curse of placing every other year," she says. But more importantly, Chung wants to see the team grow as a whole. "I just want the team to have fun and stay together as a whole family," she says.