The event included two parallel forums in Downtown Silver Spring, one taking place inside the Silver Spring Civic Center, and the other on the plaza outside.

The officials addressed a variety of issues, including federal immigration regulation, health care, the local minimum wage and the environment. The event held an anti-Trump stance, emphasized by Raskin's introduction of a new chant, "Stop Trump, stop Pence, impeach them for emoluments," which people then repeated intermittently. 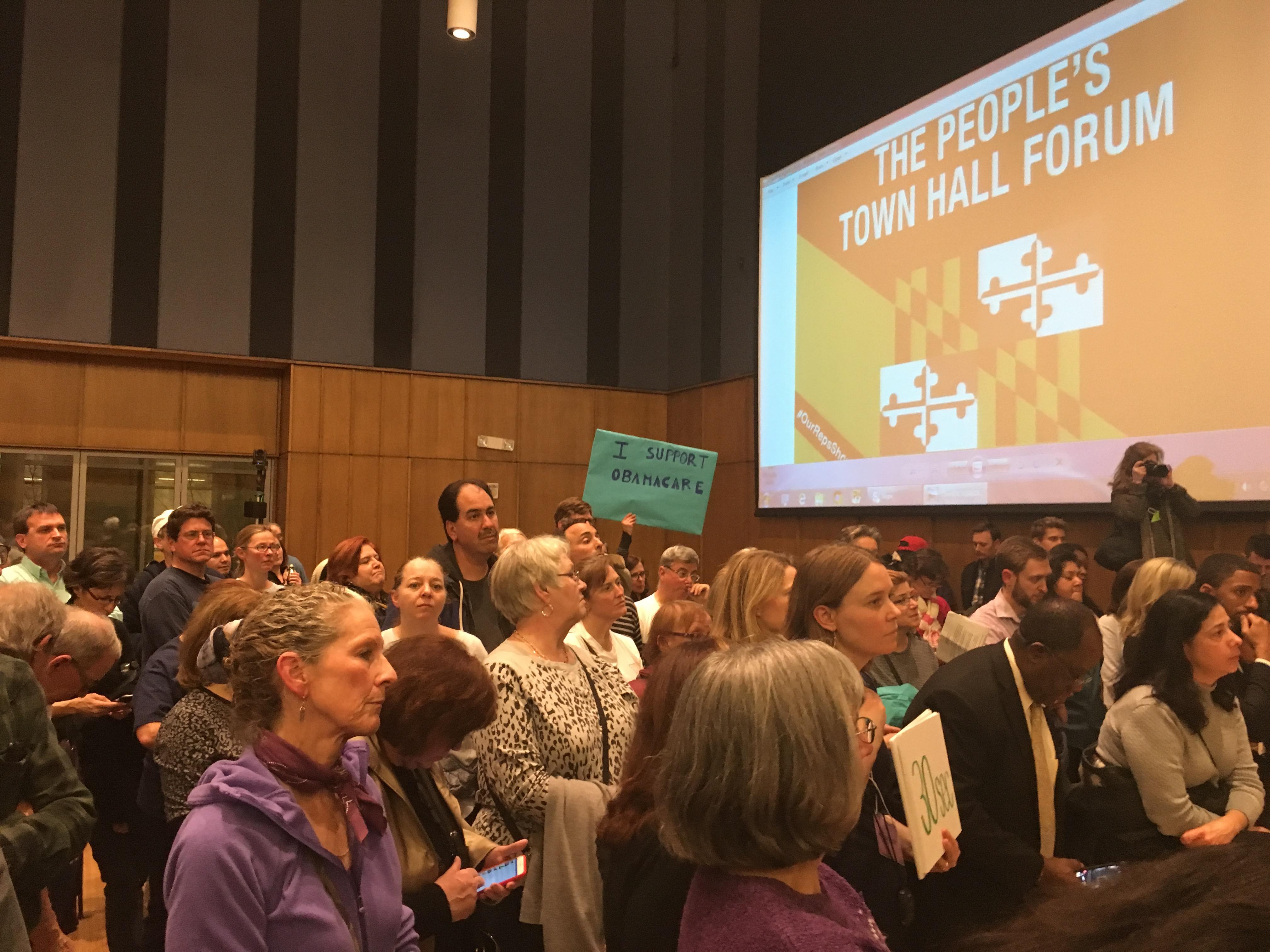 In addition to Raskin, Van Hollen and Cardin, U.S. Reps. Anthony Brown, John Sarbanes and John Delaney spoke, as well as Montgomery County Councilmembers, Maryland Senators and Maryland Delegates. The only non-elected official to speak, besides those asking questions, was Executive Director of CASA de Maryland Gustavo Torres, who told his story as an immigrant and spoke about those living in fear of deportation under Trump. He ended his speech with the chant "Maryland sanctuary state."

Local group Takoma Park Mobilization organized the event to provide an opportunity for constituents to communicate with their representatives and encourage them to resist President Trump, according to lead organizer Jen Wofford. "We felt that they need to hear from us and know that we want them to fight hard and have a hard line of non-cooperation and they need our energy to keep on fighting and people really wanted to ask questions and engage," Wofford said. The event was one of many town halls being called for across the country. Attendees chanted, "Our reps show up," a contrast with many members of Congress who have been shying away from meeting their constituents.

Social studies teacher Kevin Moose publicized the event to his students in advance, urging them to attend. He helped students get tickets through local activist, children's author and documentary film maker Lynne Cherry. She reached out to Moose. Cherry "knew there would be speeches and then the question and answer format and so she wanted to have youth voices represented," Moose said. 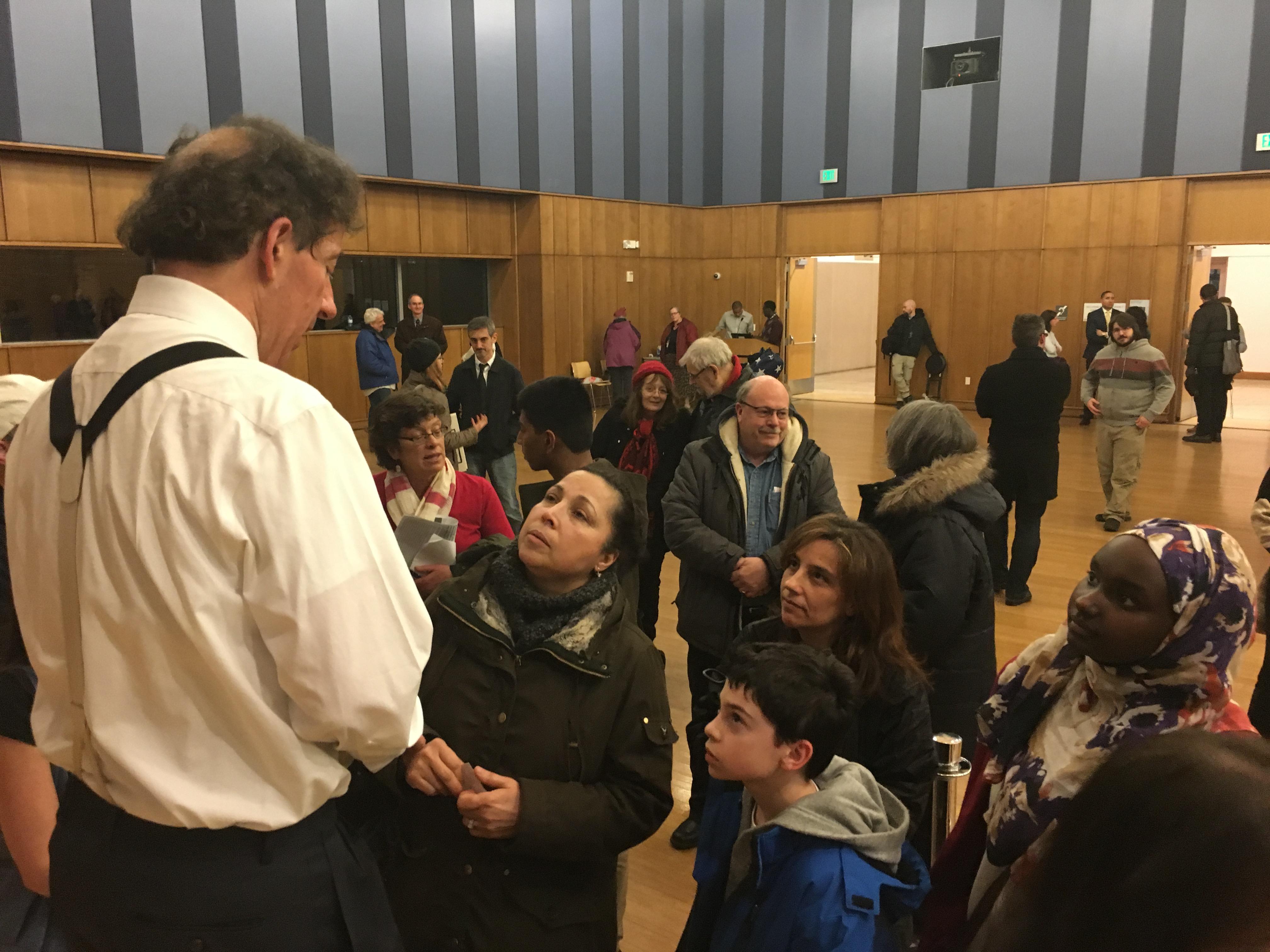 Blair student Suad Mohamud, a senior, learned about the event from Moose. She wanted the opportunity to speak with her representatives about issues that concerned her. "Mr. Moose was asking around to see if there was anyone who wanted to bring up questions for the congressmen and senators so I was excited to do that," Mohamud said.

Sophomore Camden Roberts also attended the event, independent of Moose. She has been involved in other protests, particularly of Trump's immigration ban and wanted to know more about her elected officials' positions. "I didn't know as much as I should have about how our elected officials stood and it's important to me that I now know that they believe in protecting our people from our president," she said. One topic which particularly resonated with her was the officials' positions on U.S. Immigration and Customs Enforcement (ICE) raids and immigration: they emphasized immigrants' rights and promised efforts to fight against Trump's ban and increase in deportations.

For elected officials, the forum served as a motivator, and reinforced their understanding of their constituents' support. "It continues to inspire me to see so many people engaged in democracy, this is we the people at its best and what it tells me is that this movement is strong and that it is sustained," Van Hollen said.

The event was livestreamed, and the full footage can be viewed here.