"Paper Towns" is worth the trip

Film weaves together thought and humor

"Paper Towns," based on the novel by John Green, combines clever humor with existential questions to create a film that has the audience not only laughing with the characters as they encounter comical situations, but also reflecting on their own lives. In what could best be described as a romantic mystery and a coming-of-age film, Green tackles the complexities of growing up and finding out what it is to live a full life.

Q and his friends follow the clues and spend their last few weeks of high school madly searching for Margo and doing things they have never done before. While caught up in the madness of their fast-approaching prom and graduation, Q and his best friends Ben (Austin Abrams) and Radar (Justice Smith) discover life beyond the confines of earning good grades to get into college. They learn that spontaneity and leaving one's comfort zone are important in discovering oneself, which is one of the major themes of the film. They also realize that no one is perfect, not even the popular girls at their school. Not even Margo Roth Spiegelman. The film is a story of characters who grow up through making memories with each other and, just as they are ready to leave for college, begin to appreciate high school. 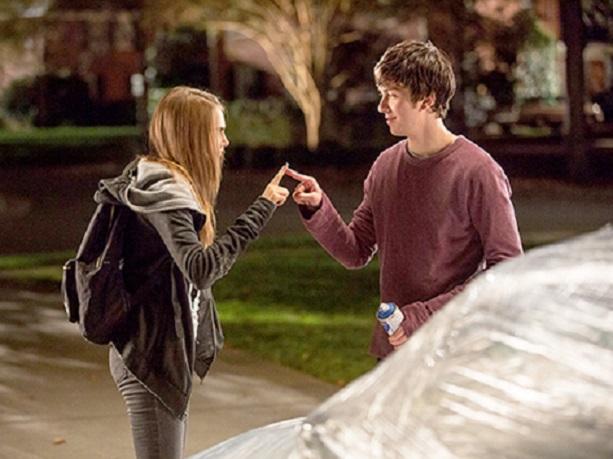 Unlike many film adaptations of books, "Paper Towns" mostly avoids over-simplifying its characters. Delevingne delivers a fantastic performance as cool, detached, and self-absorbed Margo, developing her as a character that the audience may resent more than adore. Nat Wolff, who audiences may recognize as Isaac from "The Fault in Our Stars," another film based on a John Green novel, expertly portrays Q's shock and amazement throughout the film, and also his blind idolization of Margo. Abrams and Smith provide comic relief in their mastery of their roles as the awkward sidekicks, while also asking some of the deepest questions about the high school experience.

Like the book, the film is Q's story. It is from Q's perspective, even though the camera angles are often of him and not from his eyes. He introduces the film and concludes it, with bits of narration dispersed through the rest of the film, making it a more personal experience for the audience. One way in which the film is singularly from Q's point of view is the way in which Margo is portrayed. The first time that high-school-age Margo is seen, she is walking out of her house and the scene goes into slow motion. The story takes place in mostly everyday locations and the setting thus provides few distractions from the story by accurately portraying locations very familiar to the audience. The soundtrack is full of what could best be described as indie pop. The music is most prominent when an instrumental version of Chris De Burgh's 1986 hit "The Lady in Red" plays as Q and Margo share a romantic moment atop the SunTrust building in Orlando.

While the film may not stay completely true to the book, it is an adaptation that will leave avid John Green readers, as well as unfamiliar viewers, satisfied. It is particularly suited for high school students, who are experiencing many of the same things as the characters. The film emboldens audiences to try new things and to reassess their assumptions of their peers. "Paper Towns" is an enjoyable journey and high-quality film.

"Paper Towns" is rated PG-13 for some language, drinking, sexuality and partial nudity and is now playing in theaters everywhere