Blair opens cap and gown color options to all genders

The class of 2016 voted on Thursday, Oct. 8 that they will continue to have both red and white caps and gowns at graduation. The seniors voted at an assembly where students and administrators presented the options of wearing all red or keeping with the tradition of red for boys and white for girls. Principal Renay Johnson announced the outcome of the vote later that day, but decided students will be able to choose whether they want to wear red or white. 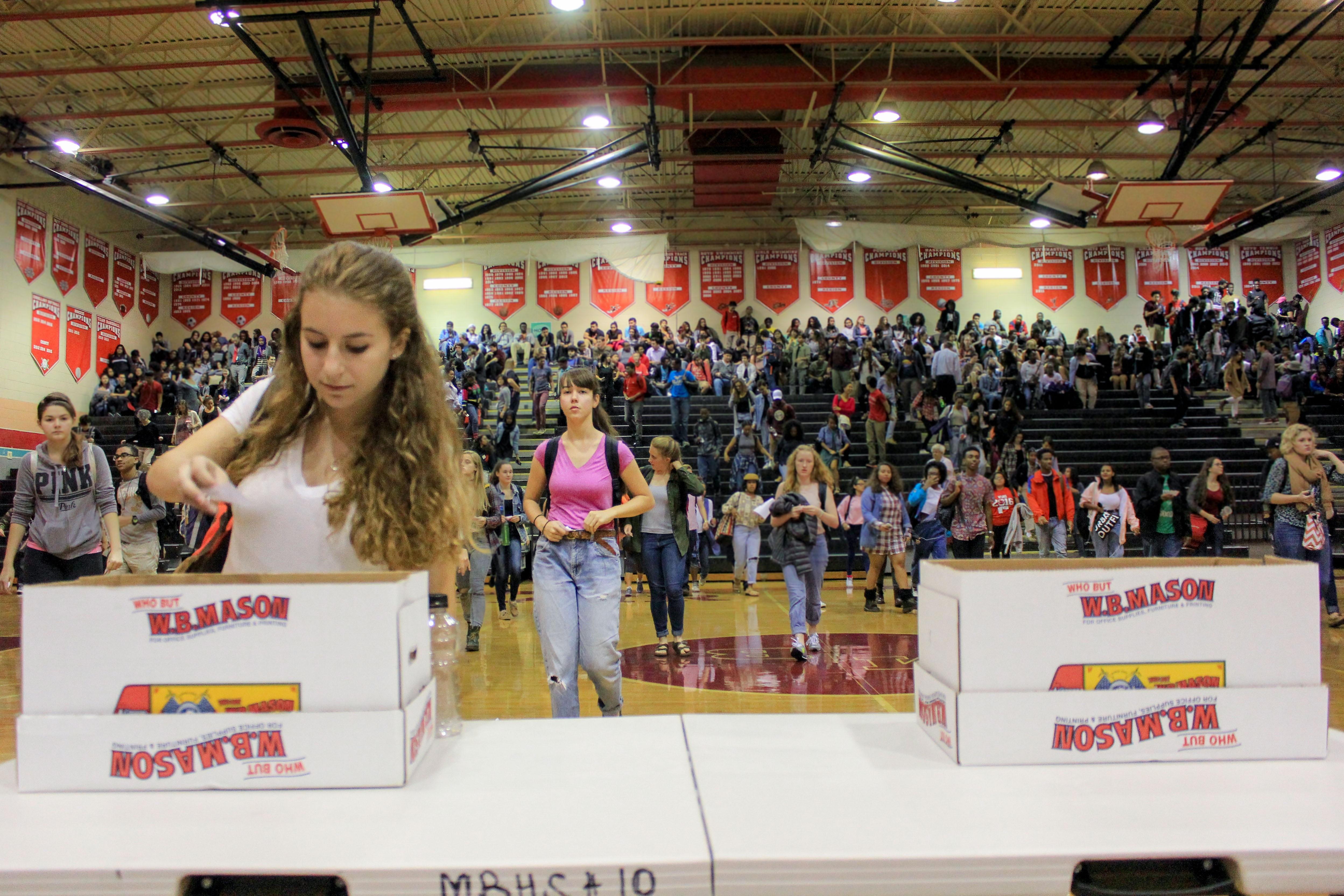 Photo: Seniors vote for their choice of all red or red and white gowns at graduation.

Photo: Seniors vote for their choice of all red or red and white gowns at graduation.  Photo courtesy of Donald De Alwis.

According to Johnson, students will also be organized differently at graduation this year. Instead of the graduating class being split by color and gender, as was traditionally done, they will be organized in a striped pattern, with rows of white and red. "My vision is we have like stars and stripes, with white then red, then white, then red, and it won't matter what your gender is, you're just part of a color," Johnson said.

At the assembly, which was held in the gymnasium, senior Rowyn Peel explained why she believed that it was best for the seniors to all wear red at graduation, while senior Nazea Khan presented why she thought that the traditional red for boys and white for girls was the best option.

Peel's main argument was that with all one color, students would not be separated by sex and gender would not be an issue for anyone.

Despite the decision to keep both colors, Peel was pleased with the outcome. "My main argument was really that we shouldn't be split by gender, and that's what ended up happening and I think it's also really cool to have the two colors," she said.

For Khan, keeping both red and white at graduation was a matter of school pride. She believed that if the seniors wore only red at graduation, they would look too similar to Northwood High School.

Once both sides were heard, the seniors voted by placing a piece of paper in a bin. Attendance secretary Roxanne Fus counted the votes and found that the majority of the seniors wished to keep with the tradition of both red and white caps and gowns. Johnson then made her decision based on the results of the vote, and also her conscience. "As I was listening to, [Khan] I thought if I'm a student and I don't identify with either gender, now I have to, so I took it upon myself to say that it's not about gender, it's about color," Johnson said.

While pleased with the final decision, Khan was dismayed by the way in which it was reached. "When I first heard about it, I was a bit angry because I had just prepared a speech and everything to present to the whole class but then they just switched it up and made it open both ways, so I wondered what the point was of the assembly," Khan said.

Senior Eljoy Tanos agreed with Khan. He was glad that the senior class had a voice in the process of choosing what the colors would be for graduation, but felt that the seniors' votes were not considered enough in making the final decision. "When Ms. Johnson said that the gender classification for color is no longer there, I was happy but kind of confused at the same time. It's good that we're not basing the colors on gender anymore, but it wasn't the decision we made," Tanos said.

Despite some opposition, many seniors were still glad that the new cap and gown color policy will be more accepting. "Ms. Johnson can't force a color on anybody. I think the decision was pretty reasonable and I think it was smart for her to change it up a bit and now everyone gets to pick what they want," Khan said.

Johnson intends for the decision to carry over to future years until it is challenged. "If next year's class says to me, 'We want to revisit it,' we will and we'll present both sides," Johnson said.