Waka Flocka Flame and the race for presidency

As we near the end of the school year, our nation is in a state of turmoil. With the 2016 presidential elections quickly approaching, more and more politicians are announcing their candidacy. From Hillary Clinton to Mike Huckabee, the field is becoming overwhelmed by those hungry for power. Now, however, a bright light shines through the hopelessly entangled jungle that is American politics. I'm talking, of course, about rapper Waka Flocka Flame.

Flame announced his candidacy on April 20 (duh) via this video posted on Rolling Stone:

Now, I know some of you may be thinking, 'Is this a joke? Is he even old enough to be president?' Actually, yes, he is. Though the minimum age for presidency is 35, Flame's vice presidential candidate can serve for the first five years of his term. Yes, you heard that right: DJ Whoo Kid would be in charge of our country.

Amid growing criticism from political pundits and bloggers alike, Flame has continued to defy the odds by campaigning extensively and working hard to become the leader everyone wants. And he's getting there! Let's look at some of his opinions on the serious issues of our times.

Flame's for it. Obviously. And here's the thing – it's already happening. Just look at Colorado (if you can see it through all the smoke, that is). Flame's not alone on this issue, either – Republican presidential candidate Rand Paul has already vocally supported the decriminalization of marijuana. Flame's just taking that a step further. Unfortunately, though, Flame cares about today's youth too much to take it all the way: "Schoolwork getting too hard? Don't touch the blunt. Think about it. Wait till you're older." Words of wisdom.

Flame has coined the next iconic phrase in American politics: "You look around, things ain't looking good, you roll a blunt, s**t gonna be OK." A clear cross between "The only thing we have to fear is fear itself" and "It's morning again in America," Flame's uplifting words will be able to unite our struggling nation in the most difficult of times.

Who wants to eat with a big, hairy ball of heat slobbering next to you? With Flame for president, we'll no longer have to worry about having meals disrupted. We'll finally be able to eat out in peace! Enough said.

The national average shoe size for men is 10.5. For women, it's eight. Some people, however, need another extra couple inches. And then they expect to walk on the sidewalk along with the rest of us, taking up the entire space with their elephant feet. With Flame for president, everyone with size 13 feet will be banned from sidewalks.

Today's youth are constantly bombarded with standardized tests, graduation requirements and mandatory community service participation. But how well does this prepare us for a life outside of school? With Flame in office, it will no longer even be in doubt. Education matters to us, and it matters to Flame. So what does Flame propose, exactly? Obviously, the mandatory memorization of his lyrics. This way, students will be able to prepare themselves for successful future careers. After all, "Shoot first, ask questions last/That's how these so-called gangstas last/Waka Flocka Flame 1017" is definitely applicable to at least an accounting job.

Flame's for raising them: "I'm gonna raise minimum wage, I feel like all fast food restaurants should pay $15 an hour." That's enough for me.

So why not vote for him?

A true American icon, Flame tackles the issues that threaten the sanctity and integrity of our national culture. From marijuana to dogs in restaurants to people with abnormally large shoe sizes, Flame has a solution for everything. 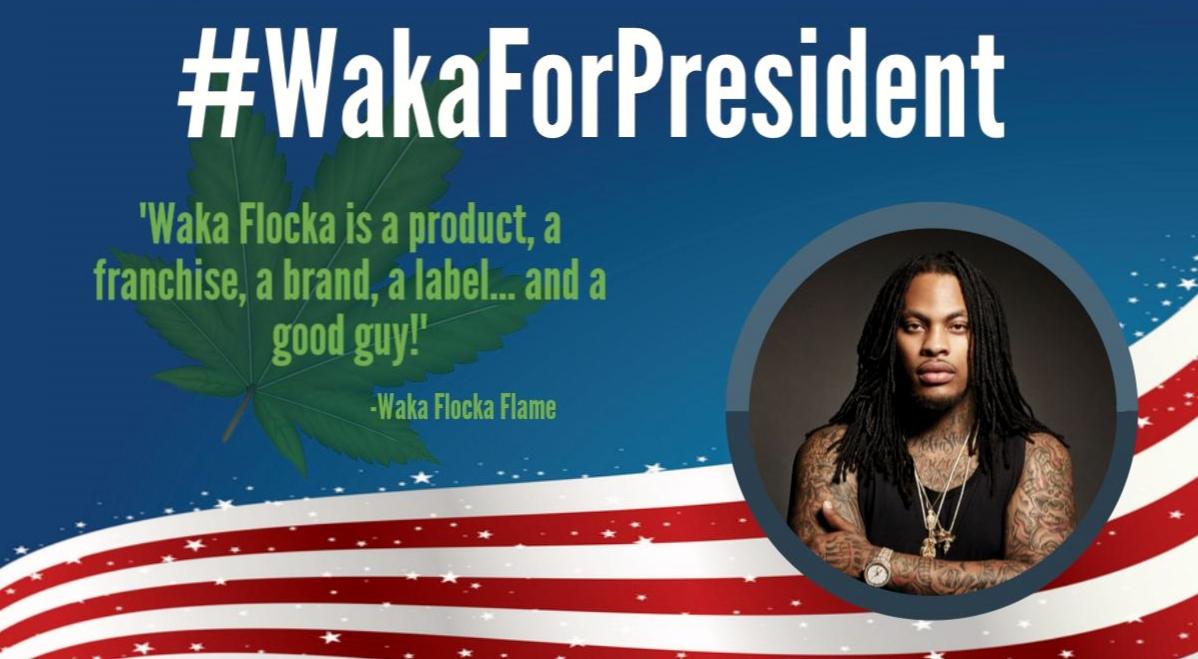 It wouldn't be the first time a celebrity has run for – and won - office. Ronald Reagan was in over 50 movies before becoming president (including "Kings Row" - check it out). Arnold Schwarzenegger, star of the Terminator movie series, was governor (or governator) of California from 2003 to 2011. Clay Aiken, runner-up on season two of American Idol, won the Democratic primary for North Carolina's Congressional seat. Palm Springs, California elected Sonny Bono (half of the iconic music duo Sonny and Cher) as mayor in 1988. And Minnesota senator Al Franken was once a member of the Saturday Night Live cast.

So go out and tweet your support with the hashtag #WakaForPresident! Show your support by buying some sweet swag! What this world needs is a more centered, prioritized government. And if that means putting Waka Flocka Flame in office, so be it.