In front of a very vocal crowd, the girls' varsity softball (15-1) took on the Wheaton Knights at home on Wednesday evening. After getting off to a rough start, the Blazers quickly turned themselves around and began to dominate the game. By the top of the fifth inning, the high scoring game ended thanks to the mercy rule. The final score was Blair 19, Wheaton 1. The game also marked the team's senior night, as the graduating players were recognized before the game.

"I loved when all the seniors ran out to the field," sophomore Izzy Lott said, "We don't usually cry on softball, so it's nice when we do."

With the stands jammed full of parents, fans, and the junior varsity softball team, sophomore Lily Montgomery stepped onto the mound to pitch the first inning. Despite walking three Wheaton players (causing the bases to be loaded early on), Montgomery turned the game around and quickly struck out the next three batters. After quickly loading the bases, Blair scored the opening run with an RBI from senior Megan Houlihan. Senior Camilla Arias continued the scoring just minutes later, when her fly ball deep into the outfield allowed two more runners to make it home. The Blazers continued their scoring streak with Arias stealing home after the Wheaton catcher missed the ball. The inning ended with RBIs from seniors Emily Daly and Sasha Grossman. 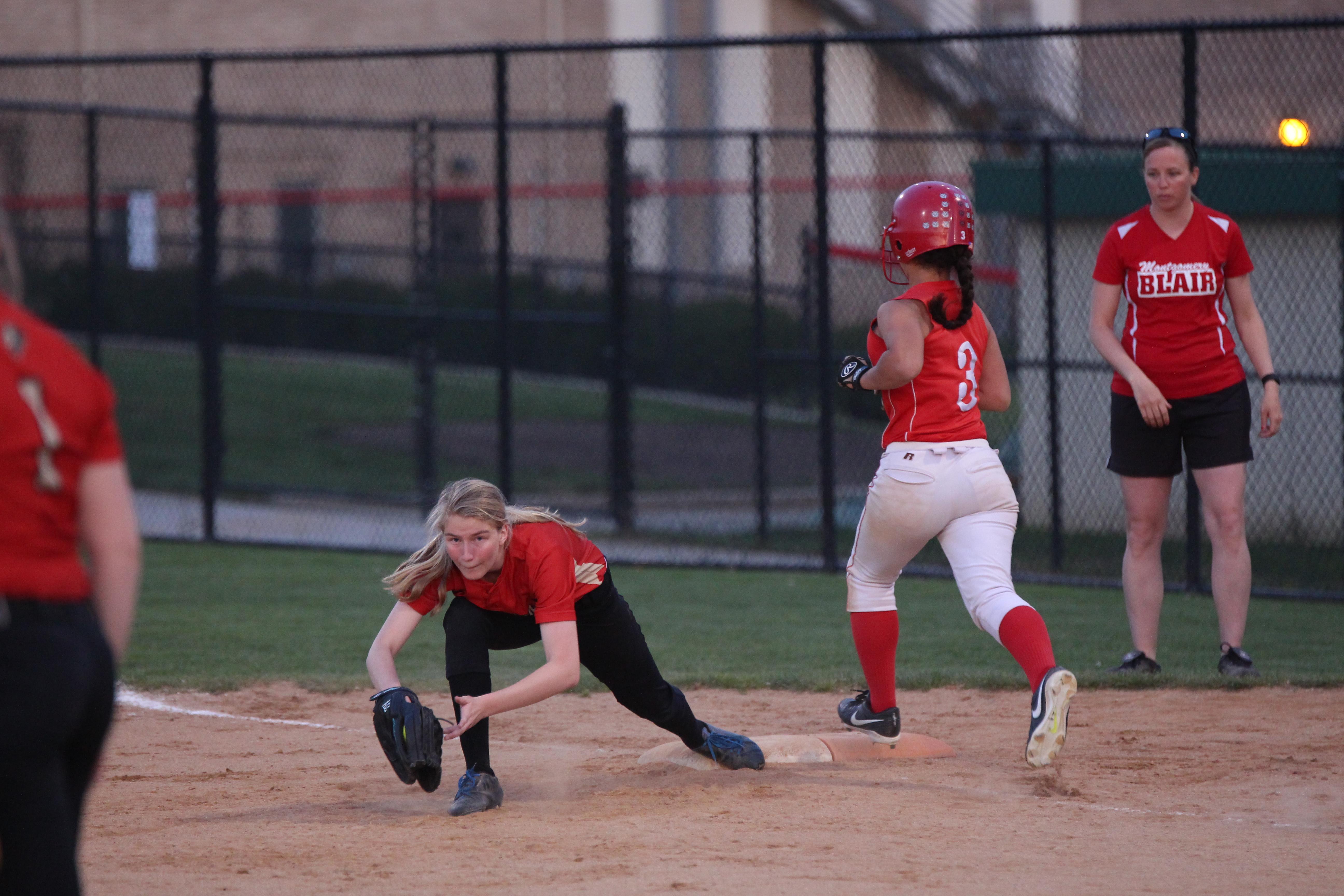 "Our seniors played really, really well," Coach Louis Hoelmann said, "It's their night after all. The success the seniors had was really my favorite part; they were killing it."

While Wheaton failed to score in the second inning, Blair continued their hot streak. A high fly ball into the outfield from Houlihan quickly kick started the scoring for the inning. An RBI from Arias put the Blazers further ahead. The inning ended Blair 8, Wheaton 0.

With bases loaded in the top of the third inning, Wheaton managed to get a run in. That was their only run of the night, however, as Montgomery quickly struck out the remaining batters. RBIs from Houlihan, Grossman, Montgomery, senior Maria Cruz, and sophomore Allison Mackenzie allowed Blair to open up this inning, winning another seven points off of solid hits and errors from the Wheaton outfield.

The bottom of the fourth inning saw more of the same. A fly ball to the outfield from Cruz allowed another two runners to make it home, as did an RBI from Daly minutes later. When Wheaton failed to create any opportunities in the top of the fifth inning, the mercy rule was implemented. The game ended early, with a score of Blair 19, Wheaton 1.

"I think we did a good job holding ourselves back," said Lott. "We could have scored more. It showed that we're not just good, but nice. And it made it a better game."

"I was most happy with our seniors," Hoelmann said. "Some of them didn't get much playing time this season, so it was good for them to get out there and show what they can do."

Moving forward, Hoelmann hopes the team can keep this momentum up into playoffs. "It's important for us to keep up this relaxed intensity we have," he said, "It's not about who we're playing. We need to worry about our own game, not what we're facing."