Boys' lacrosse powers past Blake in second round of playoffs

On a burning hot Friday afternoon, the Blair boys' lacrosse team (8-6) set up against division champions Blake (9-4) in the second round of playoffs. Despite losing to them 10-4 during the regular season, the Blazers came out full of intensity and confidence. Battling for their lives, Blair managed to overcome a four-goal deficit and win the game in the dying minutes by a final score of 10-8.

The Blazers got off to a rough start, as the Bengals quickly drove the ball forward and scored within the opening minute. Despite conceding early, Blair kept faith and quickly turned the game around. As the game progressed, Blair began to keep possession in their attacking third. Finally, in the sixth minute, senior captain Eyal Li beat two defenders and wrapped around to the left post to rock a shot past the Blake goalie. The goal kick-started the Blazers, who scored again minutes later when attacker Sean Tan put a hard shot into the back of the net. Blake quickly responded however, tying the game at 2-2. Despite the Blazers' best efforts – and another goal from Li – the team failed to shut out the Bengals' attack, and the quarter ended Blair 3, Blake 5. 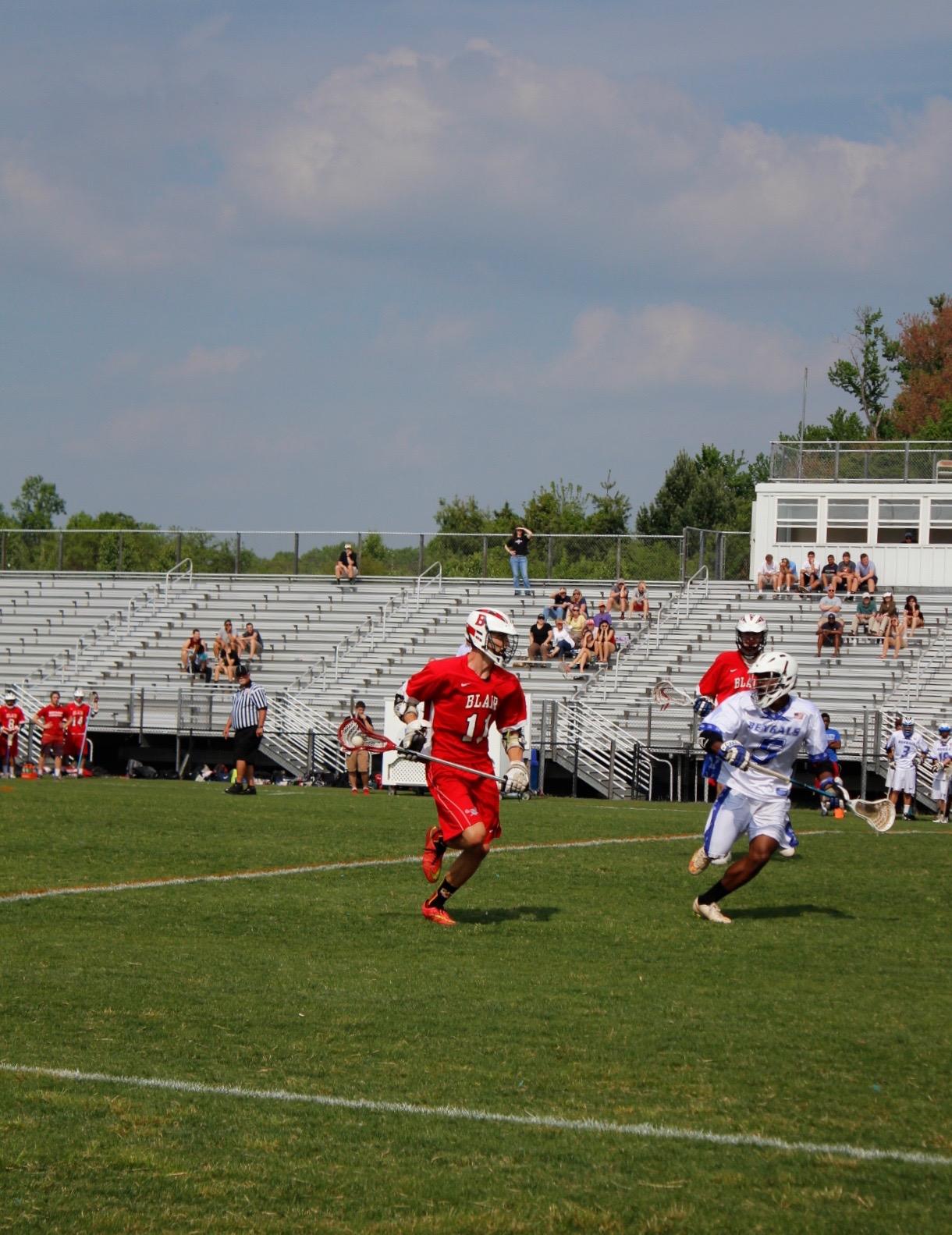 Running down the line

The second quarter began much the same as the first, as Blake scored early to extend their lead to three goals. The Bengals continued to gain momentum and possession until, in the sixth minute, senior Yonis Blanco forced a turnover that initiated a series of intricate Blair passing. Sophomore Paul Moser scored seconds later (with an assist from junior Matthew Guerrera), ripping a shot past the Blake defense. However, Blake quickly countered to preserve the lead. In the face of all the Blake possession, the Blazers held firm and kept their heads up.

"This is the true Blair lacrosse," Guerrera said, "It's lit."

The second half opened with a frenetic flurry of Blake possession. Blair goalie Ashe Durban played the game of his life, making save after save to keep the Blazers in the competition. After a Blake goal in the sixth minute, Blair quickly regained composure. They responded minutes later with a goal from Moser, but they didn't stop there. When Blanco won the succeeding faceoff and drove straight to net for the Blazers' sixth goal, the team came alive. The Blazers whipped the ball around, easily evading the Blake challenges and constantly probing for an opening. When Tan scored in the third minute, the Blair bench erupted. The Blazers ended the half down by one, with a score of Blair 7, Blake 8.

The fourth quarter was the real test. The Blazers came out looking determined, playing with grit and passion. The Bengals managed to keep them out until, in the seventh minute, Blanco powered a shot past the Blake goalie to tie the game at 8-8. Driven by an eruption of noise from the bench, the Blazers reset for the faceoff. After gaining momentum, they easily outperformed a tired Blake team. In the fourth minute, a cutting pass from Guerrera missed its intended target and miraculously bounced into the Blake net. Now in the lead, the Blazers frantically scrambled to defend their advantage – although they needn't have worried. A counter attack just two minutes later led to Li scoring his third of the game. High pressure to end the game destroyed any hope the Bengals had of a comeback, and the game ended Blair 10, Blake 8. 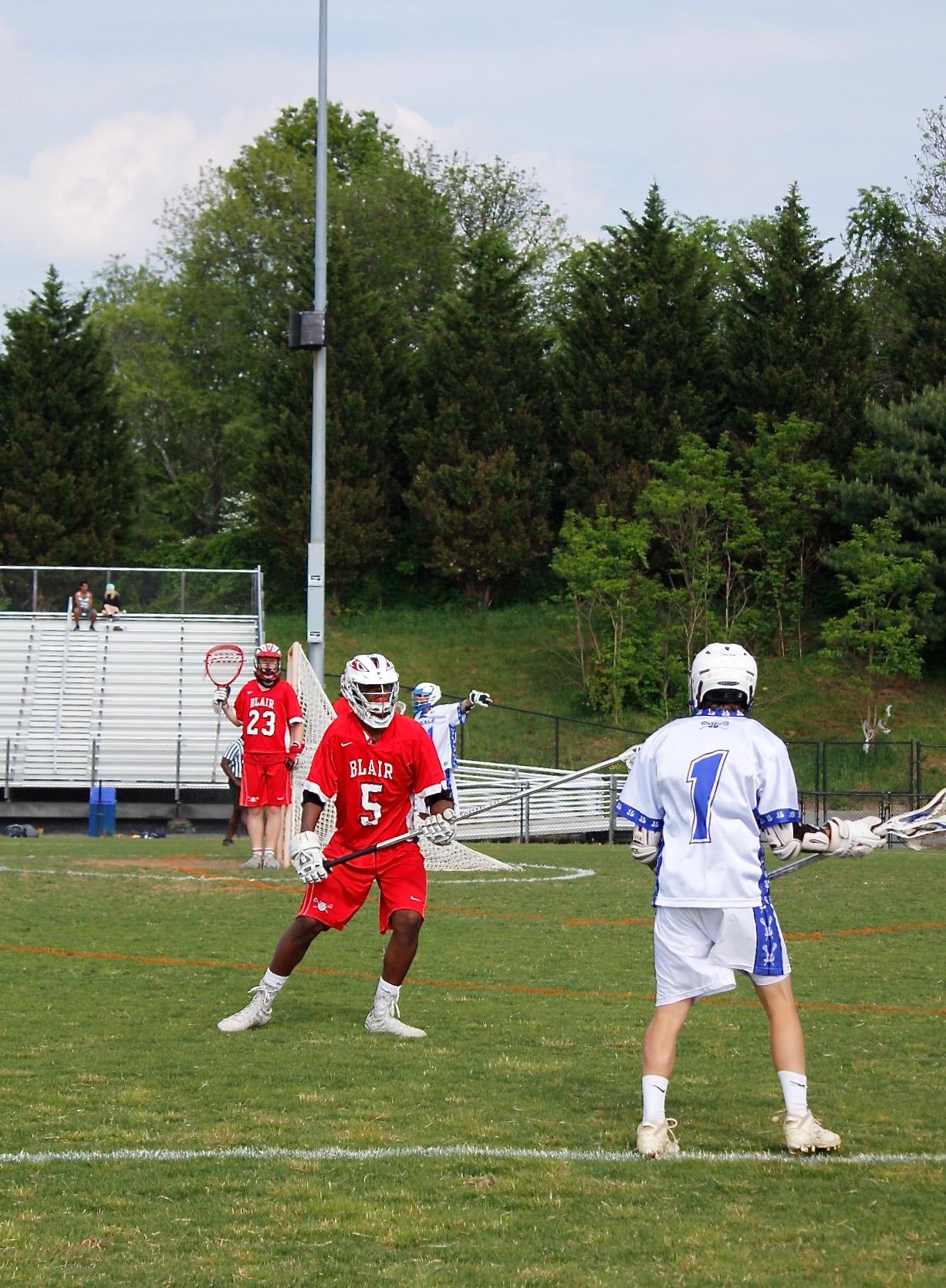 "I worked them [Blair] Monday, Tuesday, and Wednesday," said Coach Christopher Brown, "And rested them Tuesday. So we were ready for this game. They [Blake] got tired; they shut down."

"We don't make the same mistake twice," senior Max Scribner said. "We lost to them in the season, learned from that, and played our hearts out to show them who the division champs should have been."