This year, Blair's cross country team has added 31 new members, bringing the total to 96 runners. With 14 students running varsity and the other 82 running junior varsity, it's the most Blazers ever on the squad. 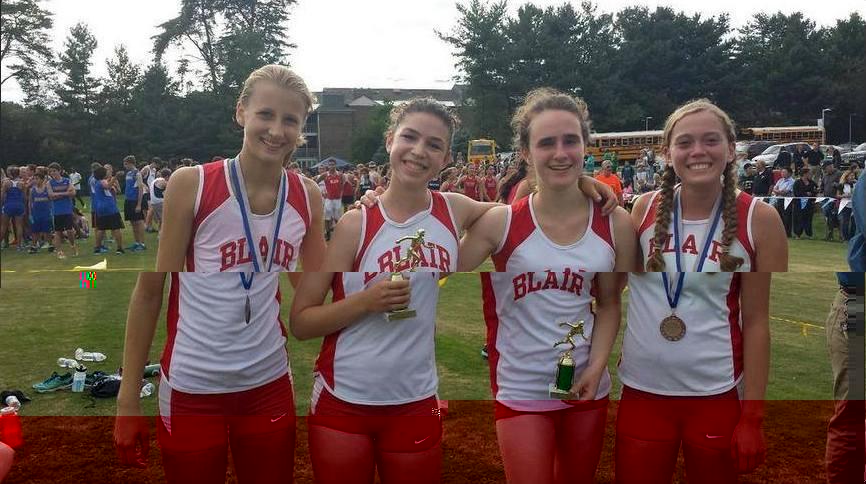 Because of the expansion, a much higher level of organization is required. But the coaching team of Michael Zick and magnet research teacher Angelique Bosse have plans in place to meet the challenge. "To accommodate the large number of runners this year, Coach Mike Zick and I named two additional captains," Coach Bosse said. "A pair of captains are assigned to each of the grades. The grade-level captains are responsible for taking daily attendance and being point-persons for general questions."

With the increased size of the team has come an increased sense of importance among its members. "Cross country is considered the catch-all sport," said junior team member Audrey Krimm, "but with more runners it has more prominence. But what is more important is that the team itself feels bigger and more important with all the people."

Increased membership has led to a shift in team dynamics. Traditionally, varsity slots are reserved for upperclassmen and the occasional sophomore. But with more runners able to represent the school, there are wider options for filling varsity spots. Qualification for a varsity spot requires a runner to be in the top 10 by the MCPS County meet in October and many freshmen are looking to contend for those places.

This year's freshmen were drawn toward cross country for various reasons. "I joined cross country because I thought it would be a good way to get in shape and gain endurance," said ninth grader Noah Chopra-Khan. Others, like Isadora Germain, joined to be a part of the Blair athletics community. "Everyone is so nice," said Germain, "I've made a lot of great friendships."

There are organizational and competitive drawbacks for both runners and coaches with such a large team. "Races can sometimes get very hectic," said junior runner Paul Bass. "For example, at the meet yesterday we were given a specific amount of space to run in and it's very hard to fit that many people into that small a space." The number of runners also became a minor issue when taking the team picture this year; it made fitting everyone into the photo difficult. "The photographer seemed a little flustered by the number of people he had to shoot," said Bass.