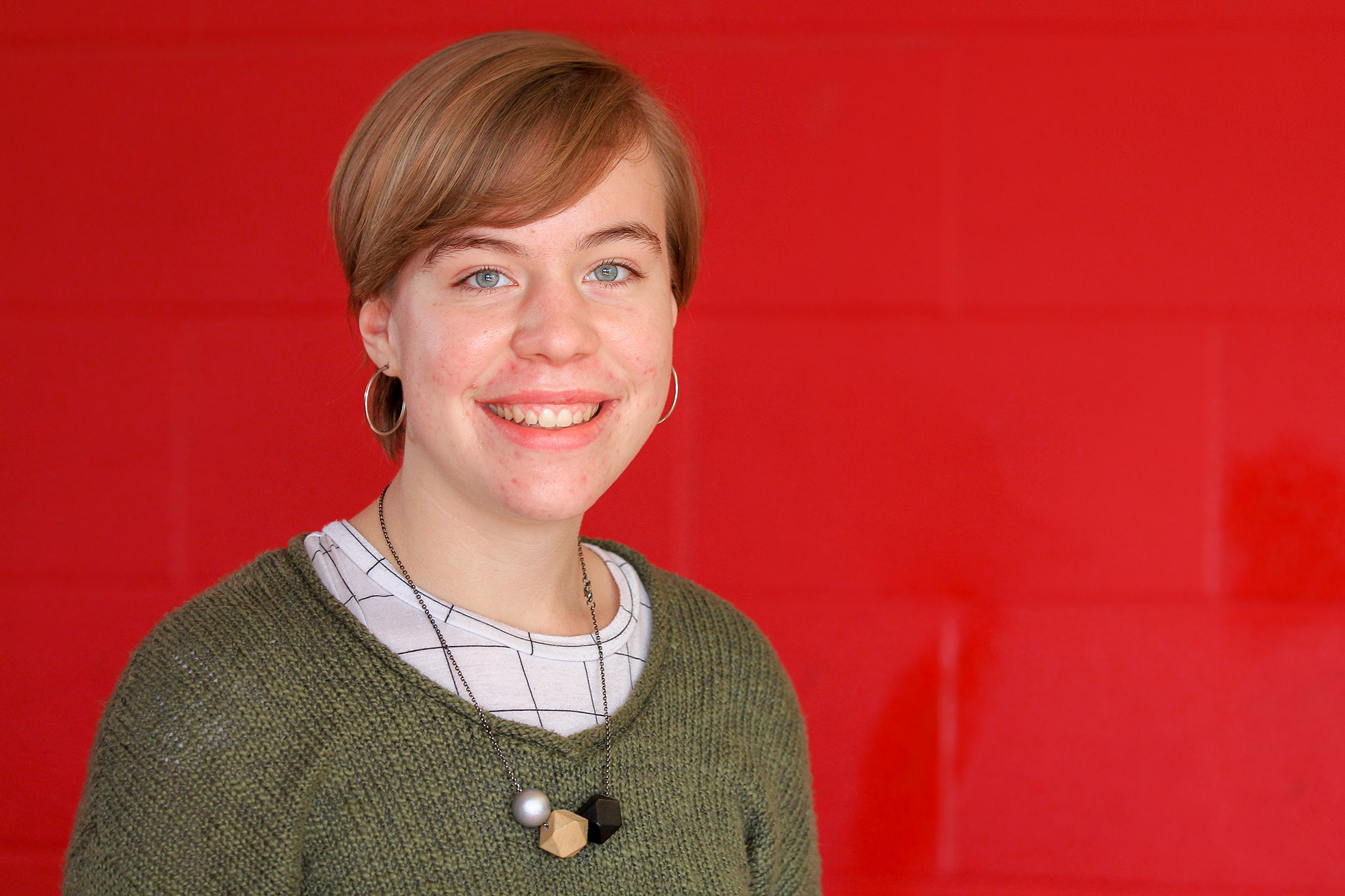 Name: Eleanor Linafelt
Position: Online Editor-in-Chief
Graduation Year: 2016
Hi there! I'm Eleanor, one of the Editors-in-Chief for SCO this year. I love reading books, playing cello and electric bass, and surfing and swimming at the beach. I am also an Emily Dickinson fanatic.

The pure, expressive voices and straightforward guitar and bass riffs of Girlpool and the softer, more complex narrative songs of Frankie Cosmos complemented each other perfectly for this small, yet excitement-filled show.

Songs to study to

When studying gets monotonous and boring, music can do wonders to accompany you through it and make it a bit more enjoyable. Hopefully this rock playlist will give you that extra push you need to get through these final exams and into summer.

This year, Blair's National Art Honors Society (NAHS) took part in the Youth Art for Healing (YAFH) program for a second year in a row.

Privatized schools are a public problem

Charter schools are pushing the widespread movement for the privatization of education. But the effects are not better. In many cases, they're much, much worse.

Yet again, Blair theater has brought together an incredibly talented cast, exquisite costuming, authentic music and a well-designed set to their performance of this year's spring musical, "Fiddler on the Roof."

As the year winds down, it's time to make a lot of decisions: which Black-Eyed Susan Book Award nominee you'll be voting for. Silver Chips Online has read, reviewed and ranked the books--so you don't have to.

'Tis the season to shop secondhand

When faced with a sudden need for a slew of new outfits, affordable is the way to go. After doing your spring cleaning, head to some of these secondhand stores in the area to get more clothes for less money.

Stina Rexford looks like any other Blair hockey player. But she's unusual in two ways. First, she's not a Blazer off the ice. Second, she's the only girl on the team.

"The Living" saves itself from a lack of life

For a book filled with outlandish death scenes, confusing plot twists and not-fully-developed characters, "The Living" by Matt de la Pena isn't actually all that bad.

The ins and outs of Fashion Week

The past four weeks have been filled with daring and dazzling fashion collections, street style photoshoots and star-studded, extravagant celebrity parties in the sartorial powerhouses of our world. From mid-February until mid-March, New York, London, Milan and Paris hosted their respective Fashion Weeks.

The Old Town Takoma Park businesses have seen a myriad of closings and openings over the past few months. New restaurants, stores and a hair salon are moving on to Carroll Ave., some of which have already opened up, replacing many long-standing businesses.

The writing on the wall

If you want to play, you'll have to pay

Musicians spend hours of time, thousands of dollars and immeasurable amounts of passion and energy to record a handful of songs to release to the public. And more often than not, the very people who call themselves fans of the artists are the ones who choose to download their songs illegally.

The Blair science team won the Maryland High School Science Bowl for the second year in a row last month. They will move on to represent Maryland at the 25th annual National Science Bowl held from April 30 to May 4 in Washington D.C.

The doctor in the classroom

There are more doctors in Blair than you may think. Not the medical kind, though—doctors of philosophy and education. They've been students far longer than any of their students have—and are now able to pass on their knowledge in their classrooms.

Where the tourists aren't

Living so close to the nation's capital, many still fail to take advantage of everything it has to offer. Some of us begin to view the Washington Monument, the White House and the multitude of memorials as merely heavily-frequented tourist hubs that fail to particularly interest us after the fifth visit. But there's more to Washington, D.C. than the National Mall and politics; the city is also home to many interesting places to visit which often go overlooked even by locals.

After ten years of an indefinite hiatus, the punk rock band Sleater-Kinney announced the release of a new album and a following tour in late October. The album, "No Cities to Love" will be released on Jan. 19, 2015 into the hands of anxiously-waiting, longtime fans who scrambled to get the rapidly-selling tickets for their February and March US and European tour.

Humans of Blair: Caring and committed

Senior Savitri Singh has wanted to become a doctor since she was four years old. Unlike the childhood career fantasies of many, Singh's dream has not left her as she has grown older.

No desk is an island

Though there is often a thunderstorm of work and activity in the Main Office, there never ceases to be a warm smile and helpful face awaiting any visitor. It doesn't come from having an easy job but rather from the constant knowledge that all the staff members in the office are always there to support each other.

The Blazers (5-8-1) lost 4-0 to the Bethesda Chevy-Chase Barons (12-3) on Friday night, ending their season on a bittersweet note. Though the scoreboard may not have reflected it, the Blazers put up an unrelenting fight through the entirety of the game.

Poetry deserves an A+

Tucked away in a classroom in a far corner of the building, with colorful posters lining the walls and shelves stocked with games, toys and stuffed animals is Blair's Child Development class. For nine three- and four-year-olds from the surrounding community, this is preschool.

The YOLO campaign is aimed at warning students of the dangers of cellphone and iPod use while crossing streets and includes toolkits designed to help increase awareness, to be sent out to all MCPS schools.

Girls' soccer comes in close in 2-1 loss against Churchill

The Blazers (2-5) played a determined and strong game against the Churchill Bulldogs (5-0-1), losing by only one goal in the 2-1 game Saturday afternoon.

Girls' soccer team loses by one goal in hard-fought game

The Blazers (2-4) brought speed, aggression and strength to the game against Richard Montgomery (3-1) on Friday night, coming up just short with a 2-1 loss.

Tucked away behind the White House, apart from the expansive Smithsonian museums, lurks the Corcoran Gallery of Art, one of the nation's oldest privately supported museums. A haven for culture, education and art, the Corcoran, which is comprised of both the gallery and the Corcoran College for Art and Design, is nearing the end of its independent existence. In late August, D.C. Superior Court Judge Robert Okun approved the Corcoran's plan to merge with the National Gallery of Art and George Washington University (GWU), a plan that will save the museum and college from financial demise, but will also rid the institution of its age-old independent character.

Vinyl back for another spin

We can stream an album before it's released, we can download a song as quickly as we can press play on it and we can have music playing in our ears wherever we go. So why are vinyl and record players making a comeback?

On the first night of soccer season, the girls' varsity soccer team (0-1) lost a closely contested season opener against Bethesda-Chevy Chase (3-0), who won 1-0. The Blazers showed their strong defensive skills from the very beginning of the game.

Shutting down on learning

Blackboards, books and lessons or lectures from classroom teachers are all quickly fading into the past; taking their place are shiny tablet screens, E-books and online lessons and resources. More laptops and tablets available for student use will mean more distractions and less vital human interaction in the classroom.

Dressing cool for the heat

As the mercury in the thermometer rises, our desire to put together outfits does the exact opposite. If you're feeling inspired to put together something a little more elaborate, read on for some tips on how to look put-together while still fighting off the heat.

Greta Kline writes the majority of the songs for Frankie Cosmos and plays guitar and sings in the band.

Senior Savitri Singh has wanted to become a doctor for the vast majority of her life.