Vinyl back for another spin

We can stream an album before it's released, we can download a song as quickly as we can press play on it and we can have music playing in our ears wherever we go. So why are vinyl and record players making a comeback?

For exactly those reasons. We're living in a world so fast-paced we can hardly keep up with it. Although iTunes and the Internet are the quick and easy means by which to listen to music, they're not always the most satisfying. Listening to a vinyl record on a record player takes time and attention. It's not the quick swipe of a screen to play an album while you're on a run or having a song cut off by your next obligation. You have to take the record out of its sleeve, carefully place it on the record player, and drop the needle. And then you have to sit through the entire song. There's no pause button.

Still questioning whether vinyl is really back? Still seeing iPods every which way you look, headphones hanging from the ears of every kid at school? You're not blind, you're just not looking everywhere. Although their demise was widely expected a few years ago, many record stores have not, actually, gone out of business and are in fact doing well. It's not just record stores that are allowing for the resurgence, however. Vinyl is also, surprisingly, available in popular clothing stores. If you've walked into any Urban Outfitters in the past year, you've probably seen the wide selection of colorful, revamped Crosley record players sitting atop bins of brand new vinyl from contemporary artists. 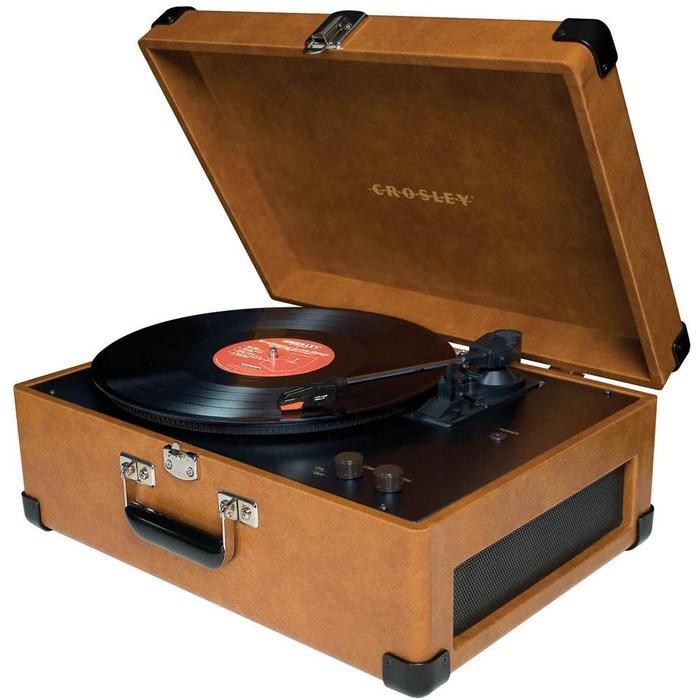 Photo: As record players get more popular, many of them are getting updated and sold by companies that were selling them decades ago.

Photo: As record players get more popular, many of them are getting updated and sold by companies that were selling them decades ago.

Although digital downloads are still considerably higher than vinyl sales, the amount of vinyl records sold by record stores went up by two million between 2012 and 2013. Up to eight million records could be sold by the end of this year.
The "retro cool" aspect of vinyl, the fact that fads seem to get recycled every few decades, probably has something to do with its increased popularity. But cassettes never made this much of a comeback, so there's also something else to it. Vinyl is durable and withstanding. It's tangible music: not stored away in gigabytes or tapes but right there in the grooves you can follow with your finger. It's pretty fascinating.

So before you go to download, illegally or otherwise, another song from the Internet, perhaps take a visit down to your basement, dust off your parents' old record player and vinyl records and lower the needle onto one. If you like what you hear: that fuzzy but somehow better sound than any iPod can make, take a trip over to one of the multiple record stores in the area. Pick up some records, whether they be used vinyl or the latest popular albums. If you don't have a record player yet, but this slowed-down, deliberate way of listening to music appeals to you, think about getting one. They're not going away anytime soon.