Wandering around outside of Blair after school in her Blazers ice hockey jacket emblazoned with her name, Stina Rexford looks like any other Blair hockey player getting ready for the weekend. But she's unusual in two ways. First, she's not a Blazer off the ice; the senior goes to Einstein High School but has been on the hockey team since her freshman year. Second, she's the only girl on the team.

Rexford started her ice skating career at three years old when her mother decided to sign her up for figure skating in an attempt to release her extensive stores of energy, a pastime which soon transitioned into competitive ice dancing. It wasn't long until Rexford began to harbor dreams of competing in the Olympics. "When I was little, with ice dancing, the Olympics were always in my mind and that was a realistic goal," Rexford recalls. But when, at fourteen, she got a back injury and also no longer had a partner, that goal became far less realistic. After not being able to practice the sport around which her life had revolved for six days out of every week, Rexford knew she had to get back on the ice in one way or another. "I heard about the hockey team and I thought, why not?" Rexford says, with a smile and casual shrug. 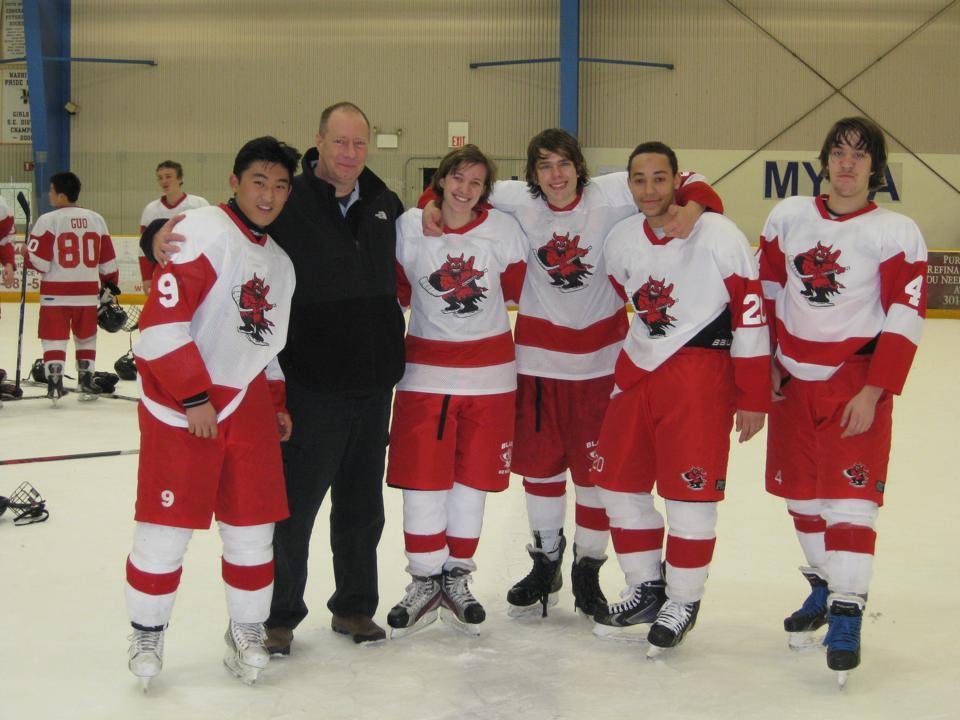 Photo: Stina Rexford poses with her fellow Einstein students who play on the Blair team on senior night.

Photo: Stina Rexford poses with her fellow Einstein students who play on the Blair team on senior night.

Rexford approached the decision to play hockey with the easy-going, motivated mindset that her teammates say is just a part of who she is. "She was a happier presence inside the locker room and everyone got along with her," senior Javier Lopez says. She came onto the hockey team knowing only one other person and without any hockey experience. Her skating history did help with turning and speed, but she still had plenty of room for improvement. "I could keep up with [my teammates], but I just didn't always know what they were doing," she explains. Head coach Kevin McCabe was impressed with her skating abilities. "She was, as fledgling hockey players go, already way ahead of the curve," he recalls. When she was first put on the ice during her debut game in her freshman year, however, Rexford didn't yet understand many of the rules of hockey. "I learned more by observation but they don't sit you down and explain the game. They expect you to know it. I think most [of my teammates] have played hockey before," she says.

Though both sports obviously involve ice and skates, transitioning from ice dancing to hockey was no simple feat. "She had skating down. The challenge for her was maneuvering the stick. But she improved so much. By sophomore, junior, senior year she had worked all these things out and was playing really well," Lopez says. Rexford is aware of her progression. "Each year I got better as I learned what I was doing. I gained confidence as my skills improved. This year I scored two goals," she says with a smile. Her coach and team were excited to see her growth. "When she scored her first goal this year against Blake, our whole bench was thrilled. I had to fight back tears," McCabe enthuses.

Though Rexford was the first girl to try out for the Blair team during McCabe's fifteen years as the coach, she never encountered any resistance from coaches or team members. "I think I was really lucky in that," she reflects. "You hear horror stories about discrimination but they welcomed me. They were very protective of me on the ice." Senior and hockey teammate Max Kronsadt makes it clear that having her try out for the team wasn't an issue. "I didn't think much of it," he states.

Rexford can only pinpoint one aspect of being on the team that made her feel isolated from the male players. "Not being in the locker room I think was the biggest thing and I wasn't in the locker room until junior year," she explains. But she made up for any lacking parts of her relationship with the rest of the team with the universal magic of baked goods. "I baked the boys blondies every Friday," she recalls with a laugh. McCabe remembers this as a highlight for the team. "The guys really enjoyed it," he says.

Though she has spent much of her high school career developing her skills on the Blair ice hockey team, Rexford has also allowed herself time to pursue other interests. These include acting in the Einstein plays and working as a coach at an ice rink, things she didn't have a chance to do when competitive ice dancing took up the bulk of her time. "[Hockey] is not the center of my life. As much as I love being on the ice, my world no longer revolves around it. And I'm fine with that. It's nice actually," she says thoughtfully. Though McCabe was at first worried that Rexford's other commitments might infringe on her hockey playing, he quickly realized that she was able to balance everything in her life incredibly well. "Not only was she excelling as a hockey player, she had lead roles in the plays and she was doing well in school. She's an exemplary example on all fronts," he says admiringly. 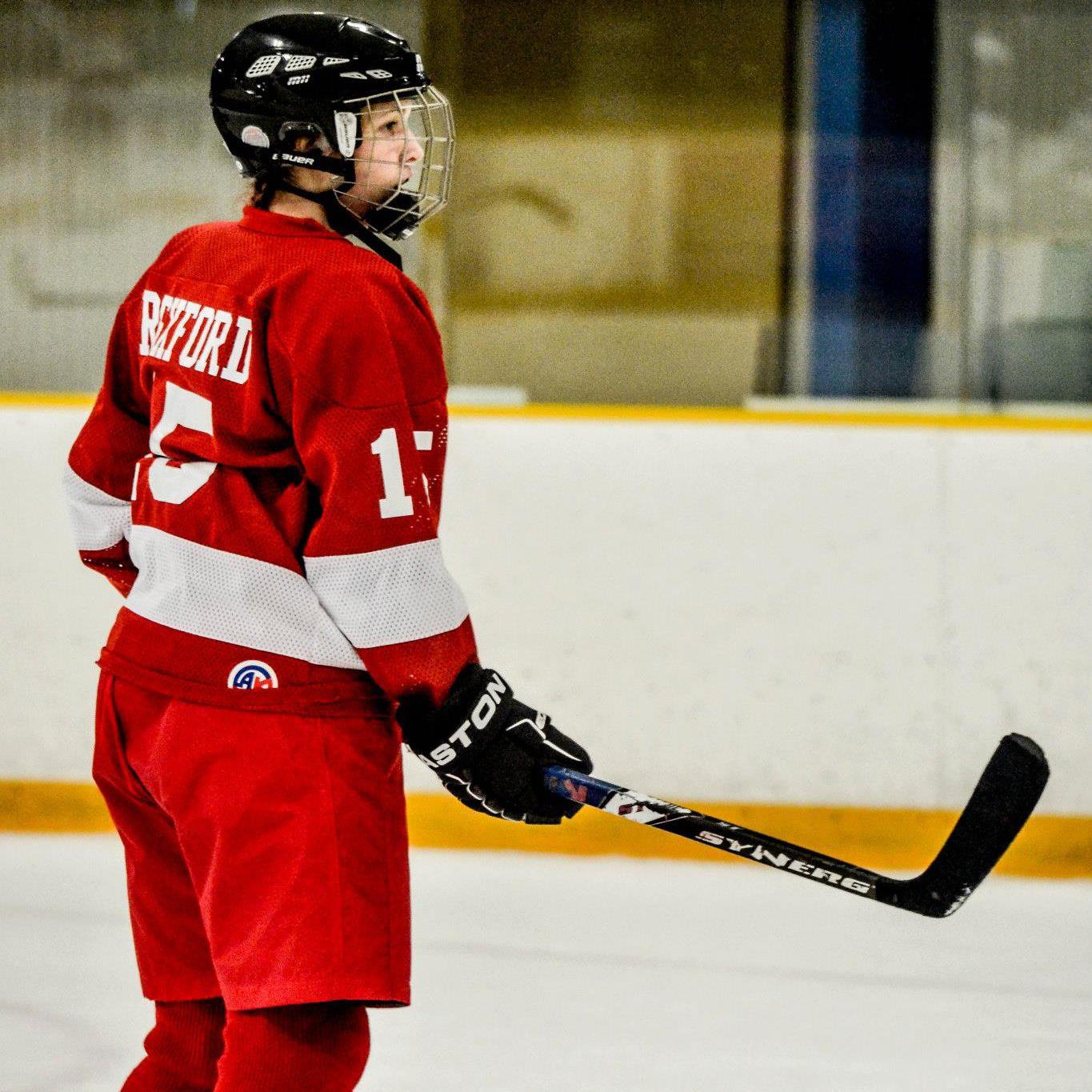 Photo: Stina Rexford on the ice during a Blair hockey game during her sophomore year.

Photo: Stina Rexford on the ice during a Blair hockey game during her sophomore year.

Ice skating has taken on multiple forms in Rexford's life, all of which have their merits. "I like hockey for different reasons than I do ice dancing. I started ice dancing when I was really little so that's my childhood; I would wear sparkly dresses and go to competitions and wow the judges for being so young but so talented. Whereas for hockey I get to hit people and I don't get in trouble," she says with a laugh.

The differences in the sports made learning the techniques needed for hockey more difficult for Rexford, but the crux of them, the skating itself, made her feel perfectly at home. "Being on the ice to me has always felt like flying to me. One of old coaches described it as being a drug and I am definitely always happy when I am on the ice," she says with a touch of her ever-present positivity. Her passion for being on the ice and her upbeat personality are things that McCabe greatly appreciates about her. "She's a good player and a wonderful individual," he says. "It's a shame she won't be back next year." Though she won't be able to be on the team, she'll still have a chance to play again with her fellow Blazer players at the alumni hockey game that is held every year around Christmas. "Her showing up to the alumni game would be a highlight," McCabe says. "A lot of boys who come back will be excited to see her. They like her. That's what it boils down to. We genuinely enjoyed having her around."