Close game ends in a scoreless draw in overtime

Blake started off the first half with clean, precise passing and a few shots on goal. The Blazers' defense, led by senior Alexis Redford Muang-Muang and sophomore Eleanor Cook, started putting pressure on the Bengals and began to move the ball back up the field and creating possession for the Blazers. The first half was ridden with strong passes by the Blair, many being picked off by Blake. The Bengals' speed helped them to often keep the ball in their possession, but the Blazers ended up finishing off the first half with a strong offensive attacks.

The Blazers started the second half off strong with two hard shots on goal by junior Kelly Mayo, one of which was saved by the Blake goalie while the other flew just over the goal. Within minutes, Blake stole the ball and the Blazers were back to playing high-pressure defense. Junior Mia Bristol saw this as an area in which Blair excelled in the game. "Our defense was really strong," she said. 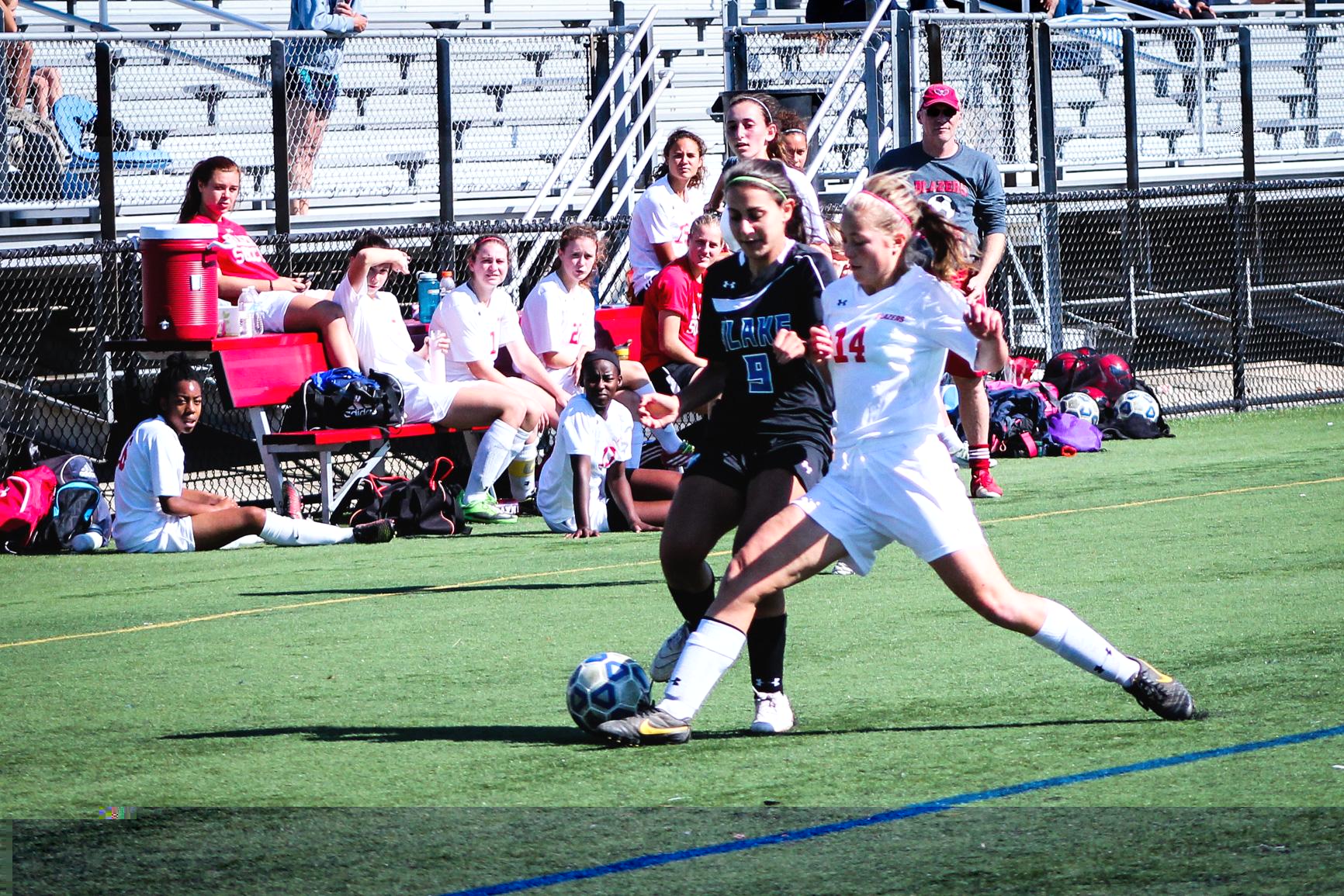 Photo: Sophomore Eleanor Cook fights for the ball while her team watches on from the sidelines.

Photo: Sophomore Eleanor Cook fights for the ball while her team watches on from the sidelines.

The ball went back and forth across the field as both teams worked hard to gain possession. The Blazers managed to get the ball in front of the Blake goal and junior Cady Pearson had a strong arcing header that flew just left of the goal. Sophomore Joelle Nwulu kept the momentum going with a high shot that also went past the left side of the net. Though both teams were fighting hard, neither was able to get a goal in regulation. Junior Amanda Feinberg thought that this was the area the Blazers needed to focus on more. "We played hard and we all really wanted it but it was hard to execute and get the goals," she said.

As the game went into the first period of overtime, neither team particularly dominated. Blake's defense managed to stop many of the Blazers' attempts to shoot, though Nwulu was able to have one low shot that barely rolled into the Bengals' goalie's hands.

With it still scoreless after the first period of overtime, the teams went into the second period, keeping the ball towards the middle of the field, fighting to get the winning goal. The Blazers almost scored when Pearson had a breakaway and took the ball down the field only to have it stopped by the Bengals' defense right before the whistle blew. 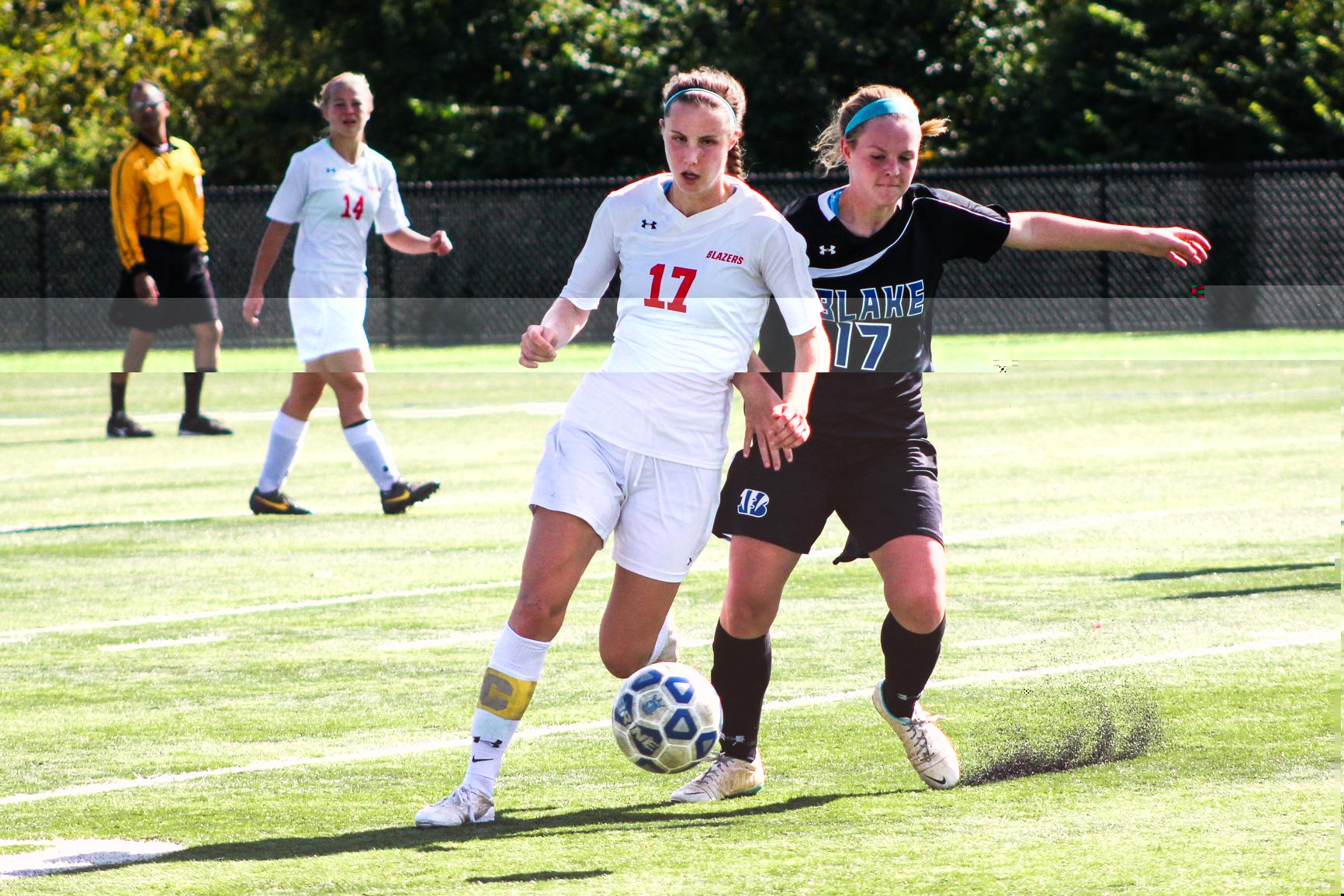 Photo: Junior Kelly Mayo manages to keep the ball away from a Blake player.

Photo: Junior Kelly Mayo manages to keep the ball away from a Blake player.

Both Bristol and Feinberg attribute the lack of goal-scoring by the Blazers to the fact that they played a hard game against Sherwood the night before. "We were tired from yesterday," said Feinberg. However, Coach Robert Gibb thought this shouldn't have stopped the Blazers. "Good teams have to win in a variety of circumstances," he said. He was disappointed with the game and saw many areas that need improvement. "We weren't sharp, we didn't click," he said. "We're making a lot of mental mistakes."

The Blazers have the chance to learn from this game and bring a win for their last game of the regular season on Tuesday, which is Senior night.