Girls' soccer team loses by one goal in hard-fought game

The Blazers (2-4) brought speed, aggression and strength to the game against Richard Montgomery (3-1) on Friday night, coming up just short with a 2-1 loss.

The game started out relatively even between the two teams, with the ball constantly moving to both sides of the field. Within the first ten minutes of the game, Junior Kelly Mayo had a shot on goal that was saved by the RM goalkeeper. After the first minutes of Blair dominance, RM gained control of the field with their strong offense and multiple shots on junior goalkeeper Madeline Burke, all of which she saved.

With twenty minutes left in the first half, the Rockets scored on a fast, low shot that went straight to the far corner of the net. With support and cheers from their fans, the Blazers came right back with aggressive speed and quick passing. Senior Alexis Redford Muang-Muang had a breakaway run down the field, getting Blair back into the dominant offensive position. 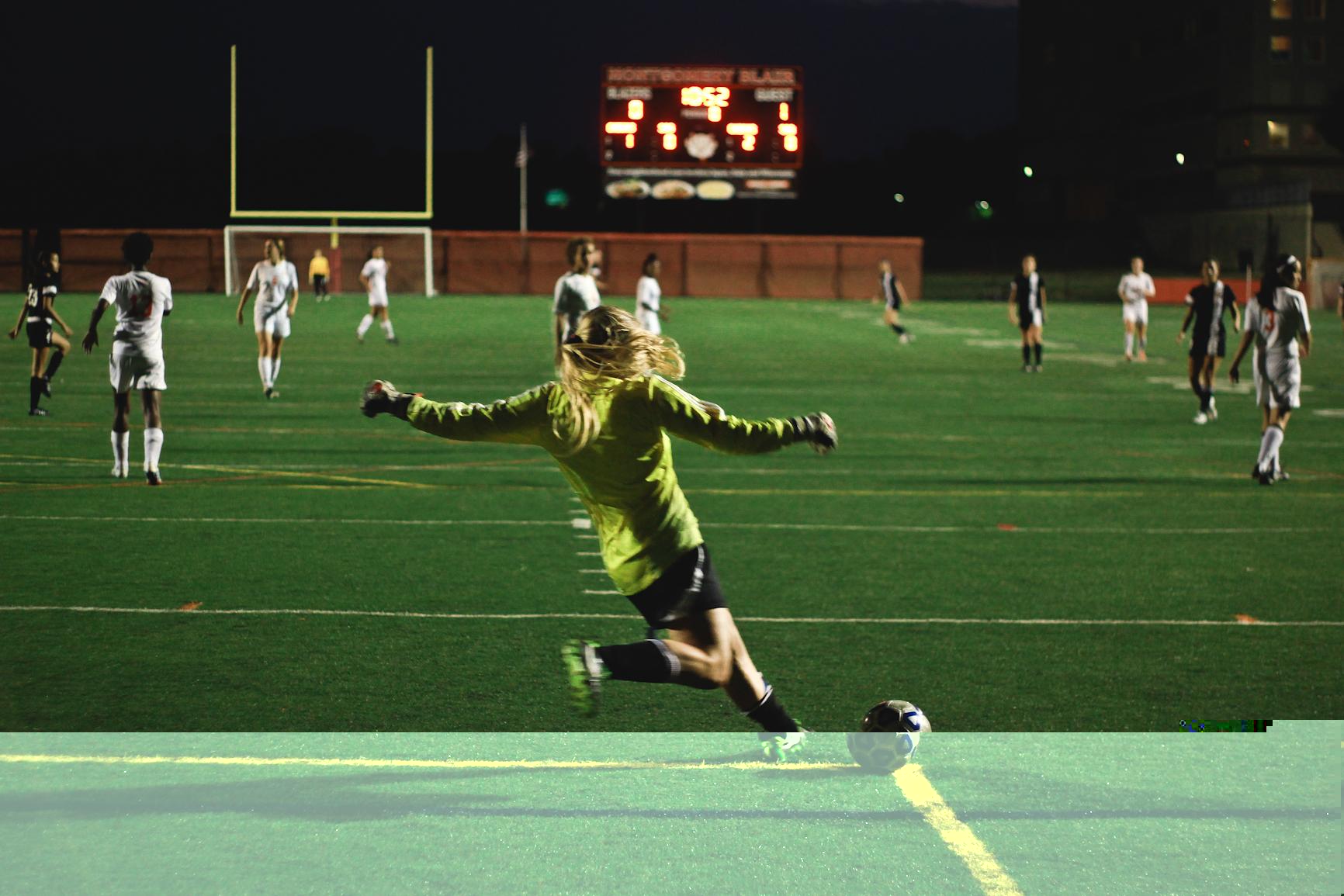 Photo: Junior goalkeeper Madeline Burke prepares to kick the ball down the field.

Towards the end of the first half the Rockets began to dominate with the majority of the ball possession. Right before the whistle, however, the Blazers took back control when Mayo took a shot that rolled just shy of the goal. By halftime the Blazers were ready to fight back for the point. Senior Trevion Fullerton was impressed with the way they performed. "We played to our full potential. I'm proud of our team," she said.

The second half started out well with effective and quick passing from the Blair players. Junior Alexandra Melinchok had a direct pass to senior Taylor Bosse who took the ball down the field for a shot that was saved by the RM goalkeeper. RM stole the ball back soon after, however, and scored their second goal of the night fifteen minutes into the second half.

Despite RM's lead, the Blazers weren't discouraged. Within four minutes of the Rockets' second goal, Mayo got past multiple defenders and scored on a high shot to the corner of the net, bringing the score up to 2-1.

Down by one goal and nearing the end of the game, the Blazers began to shift into defensive mode as RM kept possession of the ball. In the last minutes of the game, Burke saved multiple hard, fast shots from the Rockets. The Blazers ended the game strong with a break-away from Mayo down to the RM side of the field before the whistle blew.

Sophomore Joelle Nwulu felt good about how the game turned out. "We did really well, this was one of our better games," she said. As for the rest of the season, she said, "It's looking up."

Coach Robert Gibb was proud of his team despite the loss. "It was a tough game but we really bounced back," he said. "We played with a lot of heart."