Comet Ping Pong, a pizza place on Connecticut Avenue in Washington, D.C. has a few secrets hidden in its dark interior. The first is revealed in its name; though primarily a restaurant and bar, Comet Ping Pong also has a back room filled with ping pong tables for customers to entertain themselves as they wait for their food. On certain nights of the week, however, the ping pong tables are cleared out, a stage and instruments are set up, and people start streaming through the restaurant to watch lesser-known, up-and-coming bands and artists perform. On August 5th, the headliners were Frankie Cosmos, a stripped-down pop band hailing from New York City, and Girlpool, a two-member group from Los Angeles and Philadelphia. The bands, whose members are in their late teens and early twenties, played a relaxed and intimate sold-out show to kick off their short August East Coast tour together. 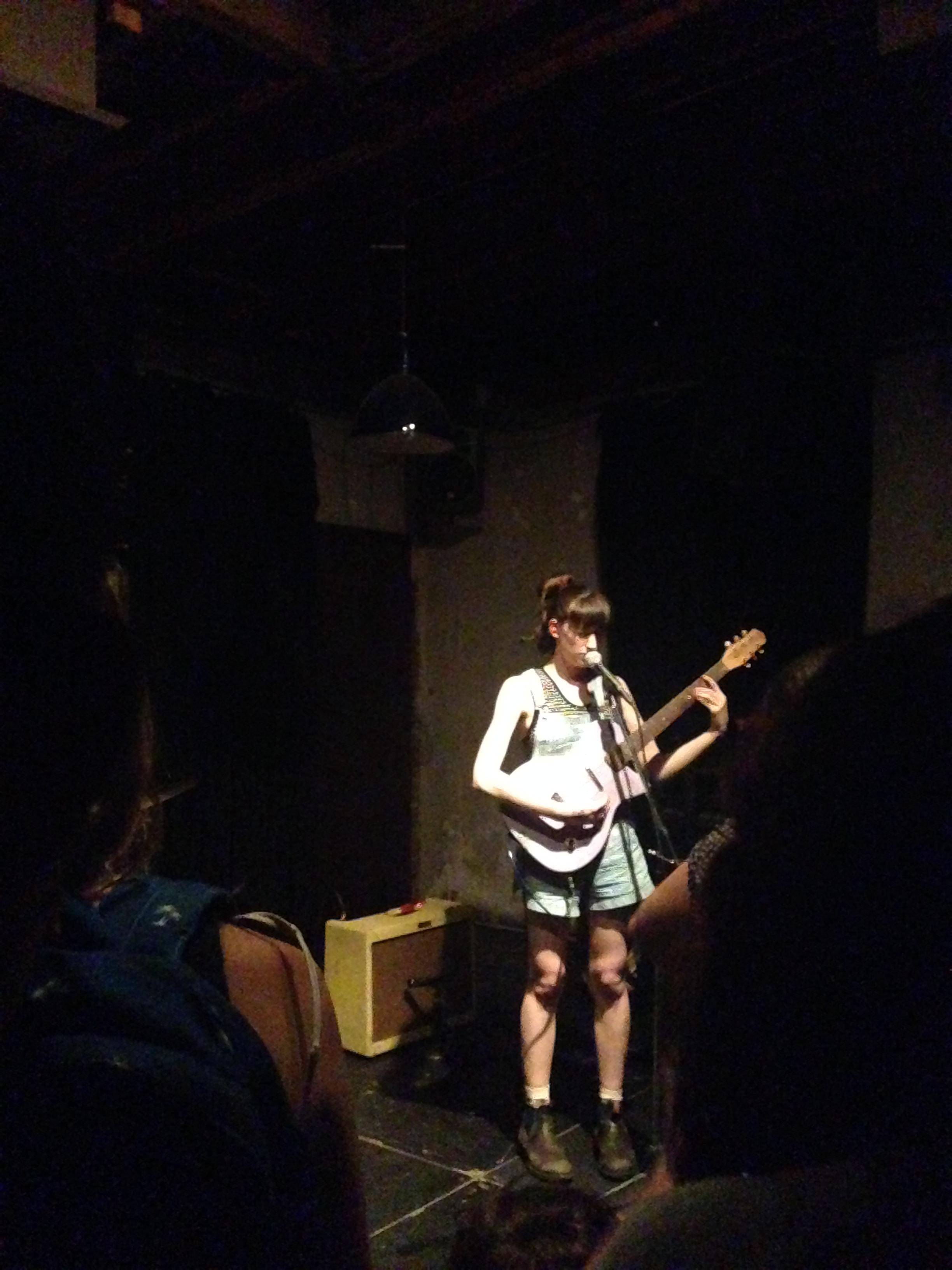 Photo: Greta Kline writes the majority of the songs for Frankie Cosmos and plays guitar and sings in the band.

Photo: Greta Kline writes the majority of the songs for Frankie Cosmos and plays guitar and sings in the band.

Airhead DC, a local one-man act, opened for the bands. Vishal Narang, the artist behind the music, played a set full of pre-recorded conversations, electronically-produced sounds, guitar and vocals. Though his style differed from the bands to follow, Airhead DC was well-received by the crowd, which had at this point started to fill the cramped, dark room.

After Airhead DC finished his set, Girlpool took to the stage. Guitarist Cleo Tucker and bass player Harmony Tividad make up for the few instruments with their loud, synchronized vocals and constant energy. Straightforward and sparse, their musical style is completely singular. They opened their set with "Ideal World," the first song off of their June 2015 album "Before the World Was Big." Tucker and Tividad filled the time between their songs, most of which were from their new album, with endearing, awkward banter between themselves and the audience, creating a relaxing and friendly mood. The audience, made up largely of high school and college students, was particularly excited when they heard the first notes of the title track's simple riff begin. Girlpool accompanied this song with others off their new album including "Emily," "Chinatown" and "Crowded Stranger." Tucker and Tividad finished off their set with "Cherry Picking," a song which begins slowly but quickly picks up with a galloping guitar riff, ending their performance with high energy.

Frankie Cosmos followed Girlpool with songs from a wide range of their discography. The band, whose current performing members are singer and guitarist Greta Kline, singer and bass player David Maine and brand new drummer Luke Pyenson, released "Zentropy," their first album recorded in a studio, in March 2014. They played many songs from this album including "I Do Too," "Leonie," and a particular crowd favorite, "Buses Splash With Rain." Since that release, Greta Kline, the main force behind the project, has also written and self-recorded an album and an EP which were posted on the group's Bandcamp page. Frankie Cosmos played "Too Dark" and "Embody" from their May 2014 album "Affirms Glinting," as well as many new songs which will be included on a new album that's set to come out in April.

Girlpool and Frankie Cosmos were originally planning to only play at Comet Ping Pong on August 6th, but since that show promptly sold out they added the Wednesday night date on at the last minute. Since this second show sold out as well, it's clear that these are two bands who, although still playing small venues, are starting to gain a fairly extensive following. The pure, expressive voices and straightforward guitar and bass riffs of Girlpool and the softer, more complex narrative songs of Frankie Cosmos complemented each other perfectly for this small, yet excitement-filled show. If you want to go to a laidback show to hear good, honest music, be on the lookout to see when these bands will play another concert in town. With the impressive music they're putting out and popularity they're gaining, it will probably sell out even faster.