Blazers finish off the season in a hard-fought, spirited game

The Blazers (5-8-1) lost 4-0 to the Bethesda Chevy-Chase Barons (12-3) on Friday night, ending their season on a bittersweet note. Though the scoreboard may not have reflected it, the Blazers put up an unrelenting fight through the entirety of the game. 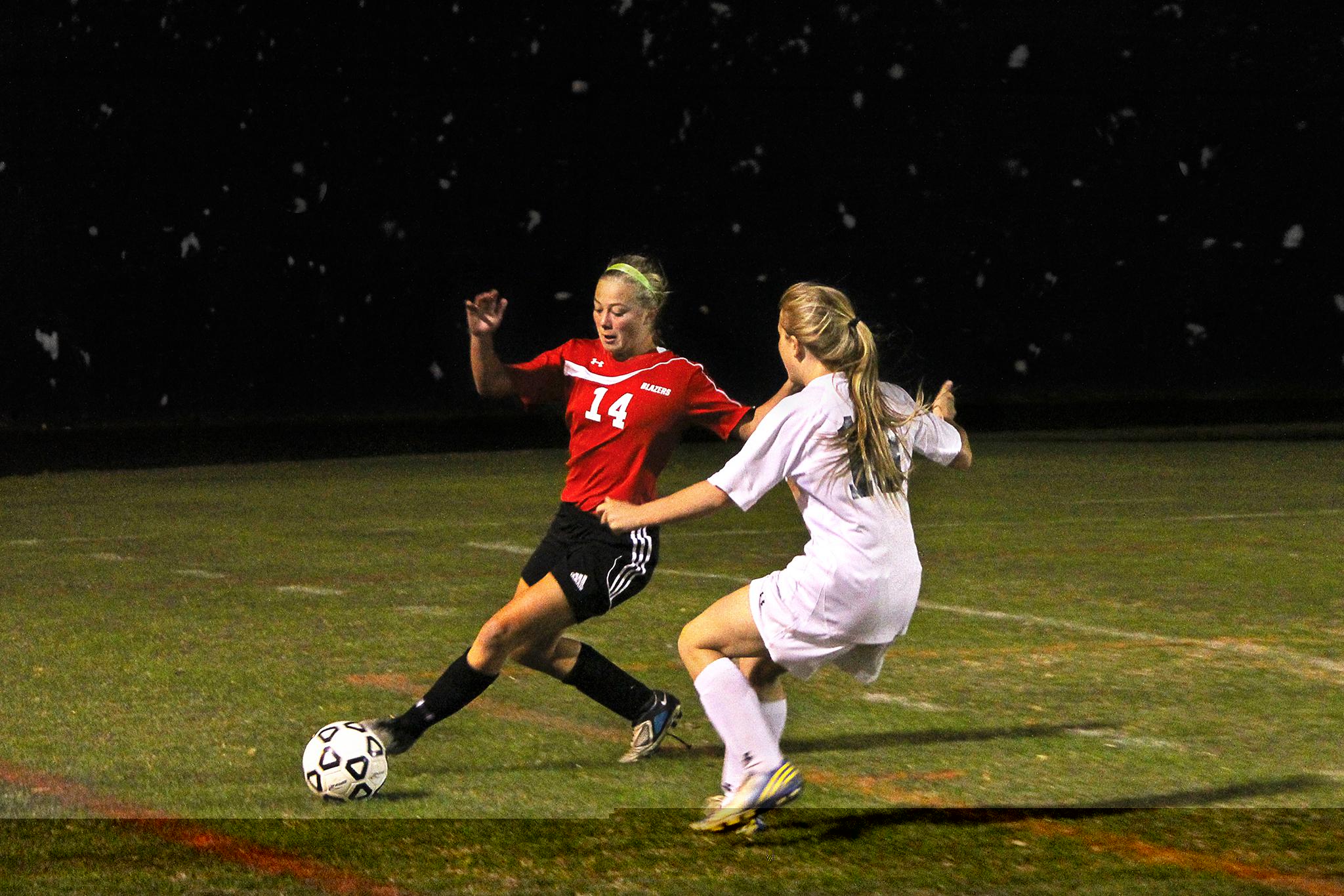 Photo: Sophomore Eleanor Cook keeps the ball away from a B-CC player

Photo: Sophomore Eleanor Cook keeps the ball away from a B-CC player

B-CC scored on a low, close kick to the corner of the net four minutes into the game. The Blazers didn't let this disadvantageous start get them down, however; they continued their clean passing and gained possession of the ball. Senior Elyse Salpekar had a breakaway early on and ran the ball down the field, shooting a high, arcing ball far from the goal that was caught by the B-CC goalkeeper.

Just as Blair was beginning to dominate, B-CC received a penalty kick after a foul was called on Alexis Redford Muang-Muang in the box. A low shot to the right side of the goal brought B-CC up 2-0 with twenty-five minutes left in the first half.

The domination went back and forth between Blair and B-CC as both teams possessed the ball and played with determination. The Barons had multiple shots during the rest of the first half, all of which either flew over the goal or were saved by Blazer senior goalkeeper Amanda Flores. In the last few minutes before the halftime whistle blew, the Blazers were dominating offensively and not allowing shots from B-CC.

The second half of the game brought another early goal for the Barons. A B-CC player scored her third goal of the night on a shot that flew just past Flores three minutes into the second half. The Blazers began to take a more defensive approach, led by senior Redford Muang-Muang. With sixteen minutes left in the game, the Barons scored on yet another close, low shot to the left corner of the goal, leaving them with a 4-0 lead. They continued to dominate offensively and had multiple shots on the Blair goal, all of which were saved by Flores.

Though the Blazers were down by four points with only five minutes left in the game, they continued to play just as hard as they had all night. They were able to keep the ball on the B-CC side in the last few minutes of the game using high pressure and aggressive determination. Junior Amanda Feinberg said this was an amazing way to see her team finish off the season. "It was inspiring to see people cared even to the last minute," she said. Coach Robert Gibb was impressed with the effort he saw his team put in, even when they knew that this was going to be their last game. "Although we certainly got beat by a team, we fought toward the end. We're feisty," he said. 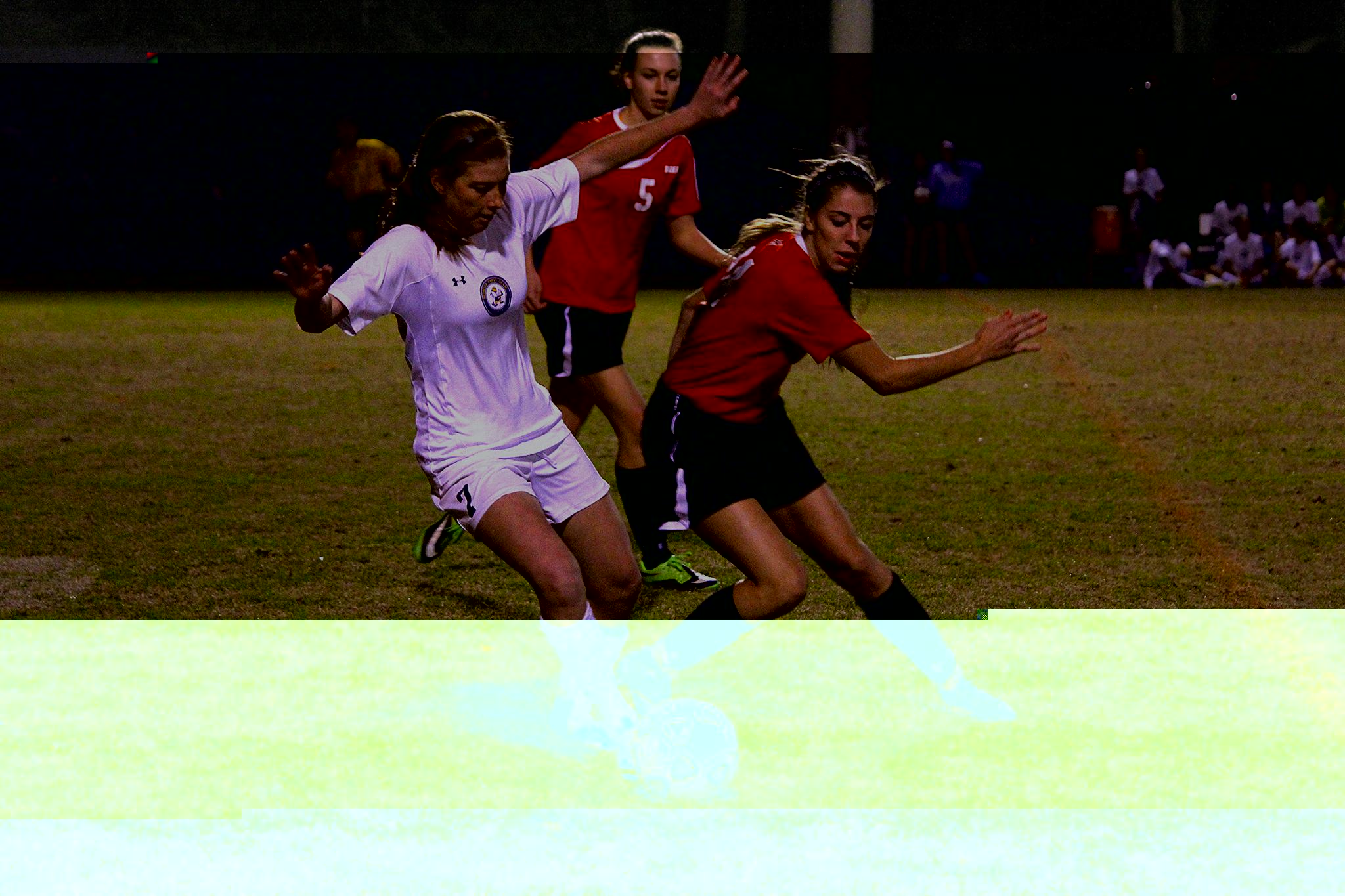 Photo: Junior Cady Pearson fights to gain possession of the ball as her teammate, senior Mikaela McCleery, looks on.

Photo: Junior Cady Pearson fights to gain possession of the ball as her teammate, senior Mikaela McCleery, looks on.

It was clear to Feinberg that B-CC had impressive skill, but said that it didn't deter the Blazers. "We played hard, they were just there a lot of the time," she said.

Looking back on the season as a whole, junior Kelly Mayo pinpointed specific things that she appreciated in her team. "I think we worked really hard throughout the season and had a lot of fun with each other," she said. Gibb echoed the claim. "They had a great time and a lot of fun," he said. "They tried their hardest. As a coach, that's all you can ask for."