In their fourth game of the season, Blair football (3-1) tore apart Springbrook (0-4) in a game that ended 40-18. Although marred by an 18-minute blackout and a medical issue in the stands, the Blazers worked together and played hard throughout the entire game.

Coming out of the gate, things didn't look good for the Blazers. Within seconds of the kick-off, a fumble in the end zone gave away an easy touchdown for Springbrook, leading to much celebration from the visiting fans. Despite going down early, the Blazers fought back. Led by wide receiver Daymon Anderson, the Blair offense pushed back their opposition to the 30-yard line, fighting hard to level the game. Finally, on Blair's fourth down, junior Brian Guzman put the ball through the posts for a field goal, beginning the Blair comeback. Soon after, quarterback Desmond Colby found the hands of senior Yonis Blanco, who sprinted 15 yards to win a touchdown. The following kick was converted by Guzman, and the quarter ended Blair 10, Springbrook 6. 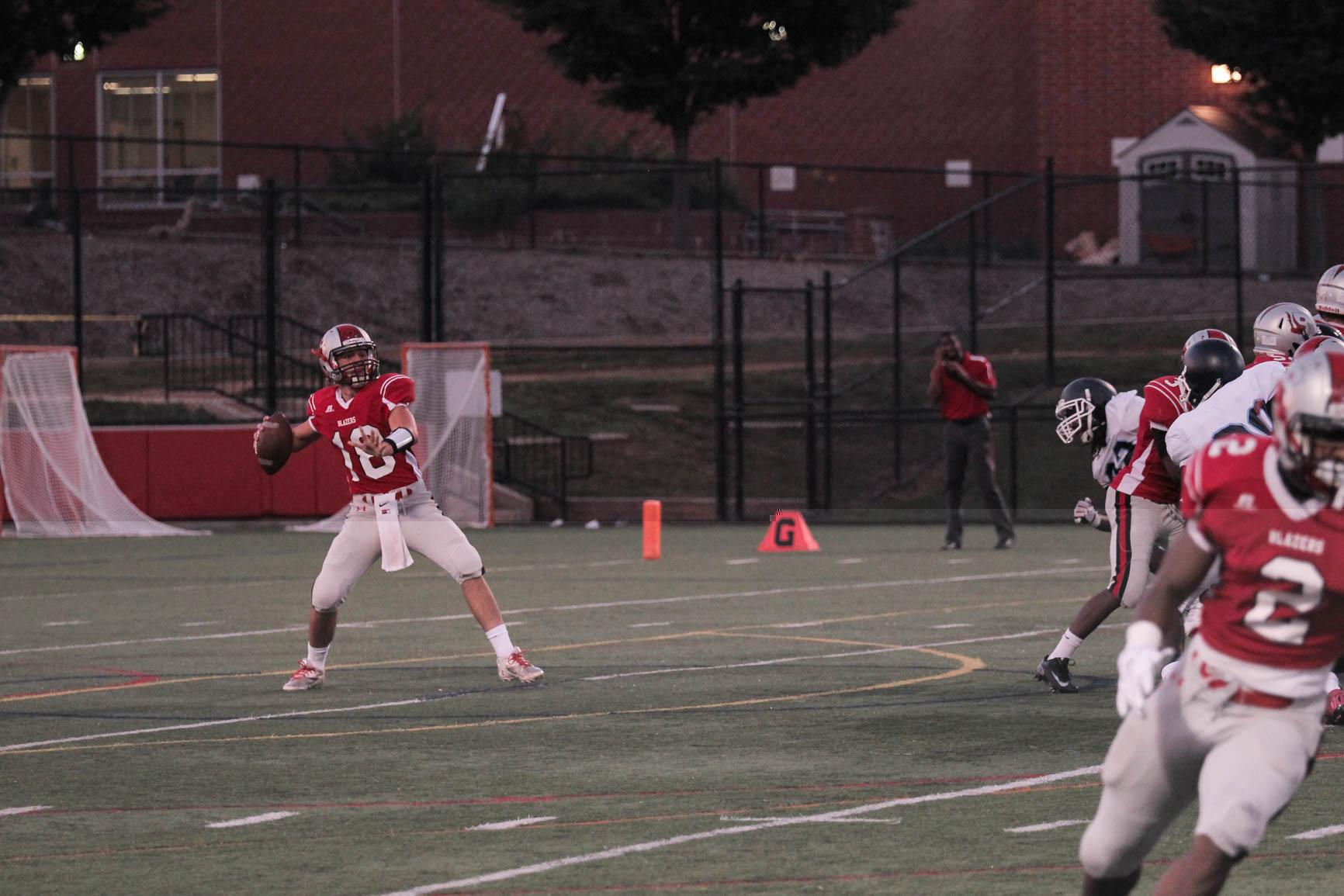 Photo: Quarterback Desmond Colby drops back to launch a pass.

Photo: Quarterback Desmond Colby drops back to launch a pass.

"Our offensive line did a great job of blocking," said Anderson, "and the quarterbacks did a good job of getting us the ball in space."

Things went the same in the second quarter, with Springbrook scoring another early touchdown. This was quickly followed by a Blair touchdown from Green, however, and the score was raised to Blair 17, Springbrook 12. As the quarter wound to an end, chants of "I believe that we will win" arose from the stands. Seemingly feeding off the crowd's energy, Blair pulled itself together, recovering the ball and scoring off of a run from Anderson.

Something unexpected occurred when, in the third quarter, the stadium lights went out in an unplanned tribute to Super Bowls past. After an 18-minute period filled with performances from the marching band and cheerleaders, the lights came back on amidst cheers from the fans. The Blazers maintained their focus, however, scoring off of a field goal and a touchdown from Blanco late in the quarter. By the time the period ended, the Blazers were running away with the game.

The fourth quarter began ominously as well, when someone fainted in the bleachers. Medical attention was provided, however, and the fan recovered quickly. On the field, things weren't looking so good either. Springbrook scored again off of a 54-yard completed pass, making the score Blair 33, Springbrook 18. With only a minute left on the clock, a burst into space from Yonis Blanco caused another Blair touchdown, and the conversion from Guzman further solidified Blair's lead. 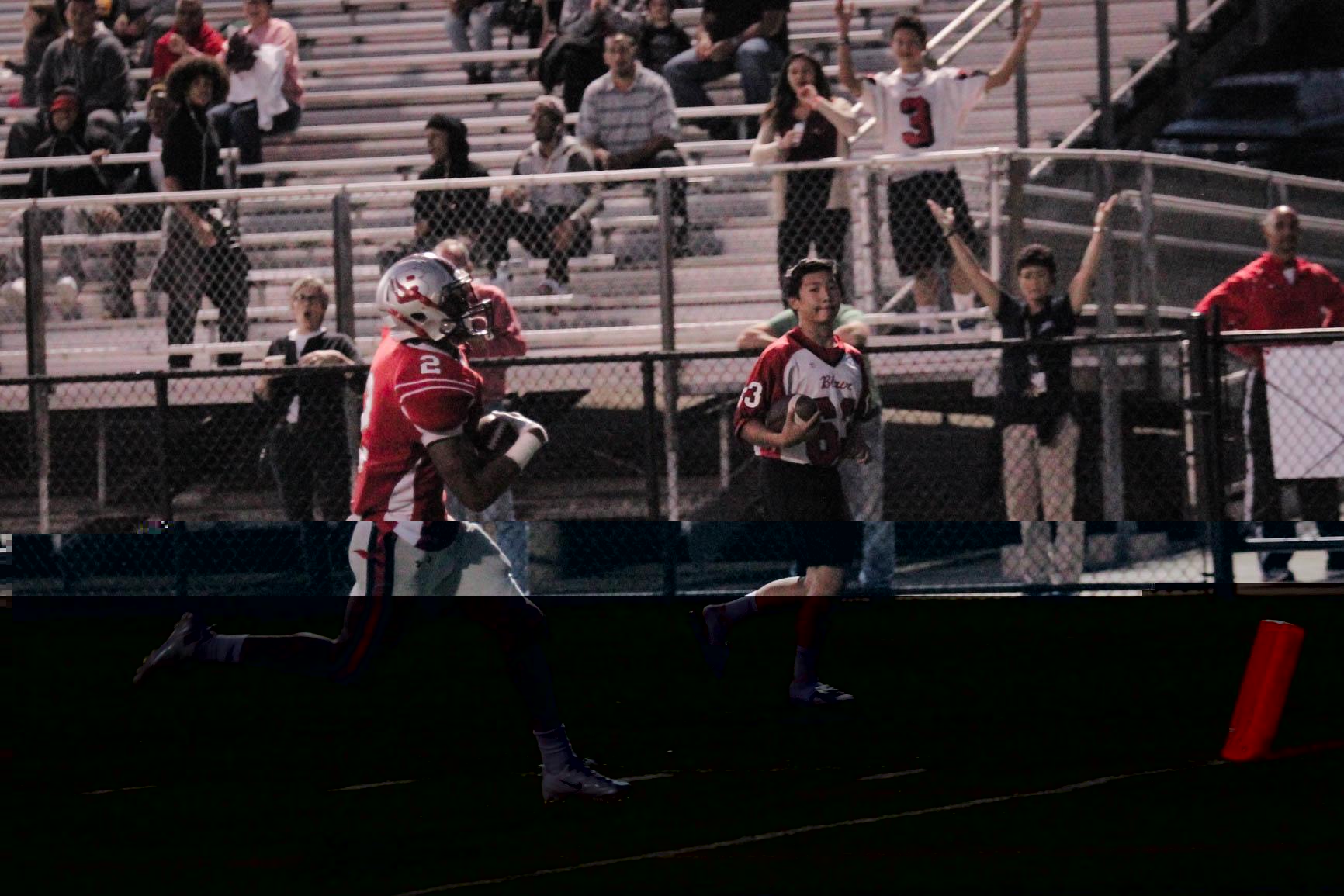 Photo: Blair had a multitude of touchdowns in their victory.

Photo: Blair had a multitude of touchdowns in their victory.

In a dominant performance from the Blazers, the team showcased its ability to run the ball extremely effectively. Runs from Blanco played a crucial role in the victory, as did excellent blocking by the offensive line. However, there's always room for improvement. "We need to work on blocking as a receiver," said Anderson, "and 50-50 balls. We need to win every one of those." He was backed up by Guzman, who added "we gotta keep hustling and always going 100 percent on every play."

Blair varsity football plays their next game at home next Thursday night, against the Bethesda Chevy-Chase Barons (0-2). Come out and support your Blazers!