On a wet Monday evening, the Blair's girls' lacrosse team (3-4) took on the Springbrook Blue Devils. Despite going down 3-0 in the first half, the Blazers continued to fight back until, minutes into the second half, flashes of lightning and rumbling thunder disrupted the match. Both teams were forced to postpone resuming the game until Wednesday, where Blair lost the hard-fought game 8-6.

Despite winning the face-off, the Blazers started the game roughly, conceding possession early on to the Blue Devils and struggling to hold the ball for long. Junior Maddie Boyer led the attack along with senior Leah Damo, consistently working the ball into the attacking third. The accompanying flurry of shots on target from senior Alexis Redford Muang-Muang was stopped every time by the Springbrook goalie, who in turn released the Blue Devils offense. 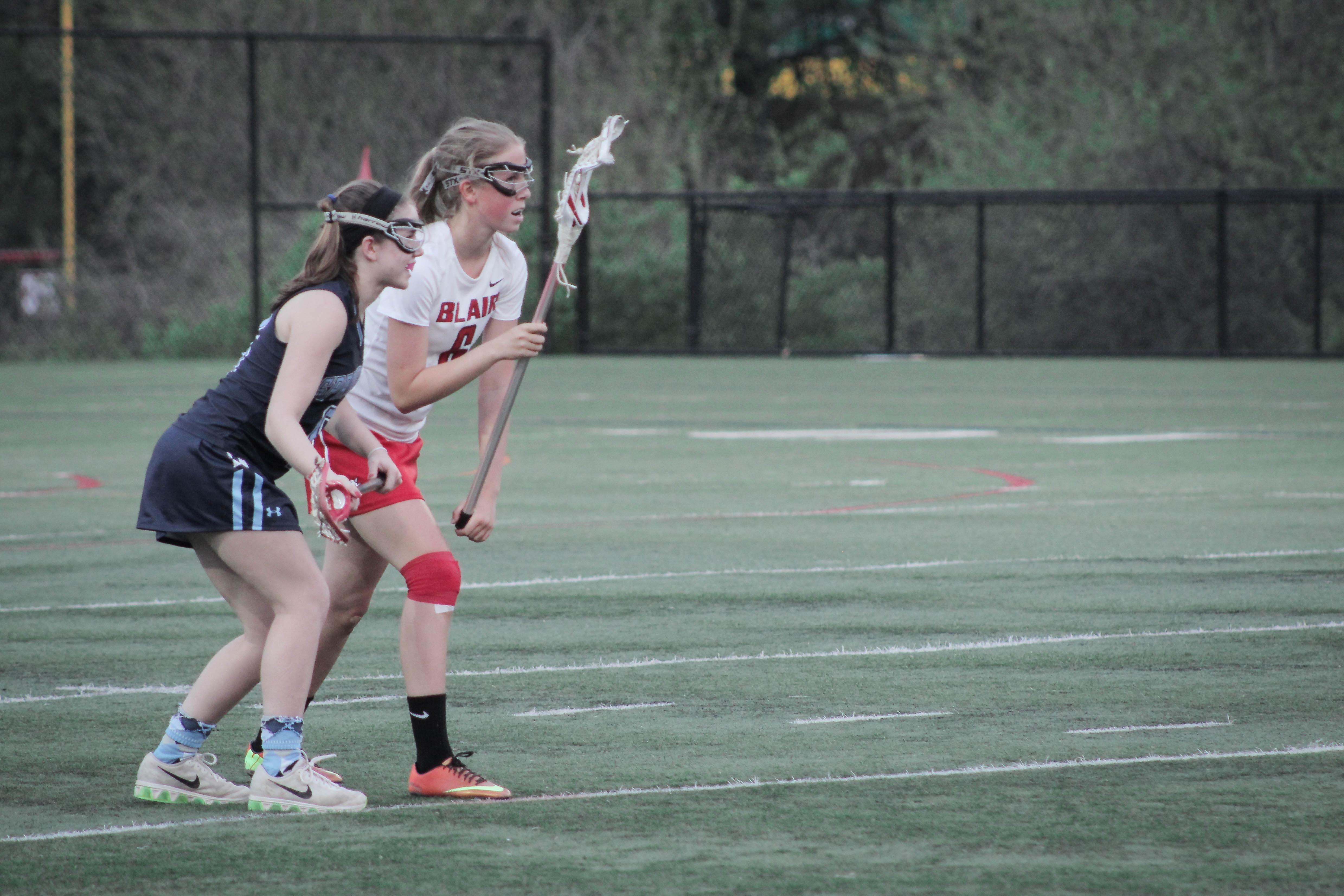 Springbrook opened the scoring with seven minutes on the clock, skipping the ball off the ground past Blair goalie Schuyler Cross. The Blue Devils got another two minutes later, with a couple quick fakes around the Blair defense followed by some hard shots. Tenacious teamwork from Boyer, Muang-Muang, senior Meg McPherson and junior Nicole Spiezio kept Springbrook out for the rest of the half. The period ended Blair 0, Springbrook 3.
"I think we definitely need to work on starting off the game strong because we have a problem with beginning games sort of flat footed and almost like lackadaisical," said McPherson.

After winning the faceoff to start the second half, Muang-Muang received a yellow card for a tough challenge on a Springbrook player. Two minutes later, however, streaks of lightning caused the game to be postponed.
"The game interruption was good for us because they had the momentum with the 3-0 lead," McPherson said, "So it definitely took that away from that. It also gave us time to highlight some key things about their game and implement them in practice."

When play resumed on Wednesday night, the Blazers came out fresh and determined to make up the deficit. As Blair began to shoot more and attempt to break quicker, Springbrook attempted to slow the game down and hold the ball longer in order to run down the clock. In a half characterized by lots of turnovers and quick transitioning from team to team, the Blazers managed to slowly pull themselves back up until, with only seconds left on the clock, captain Leah Damo netted a last second shot to tie the game at Springbrook 5, Blair 5. 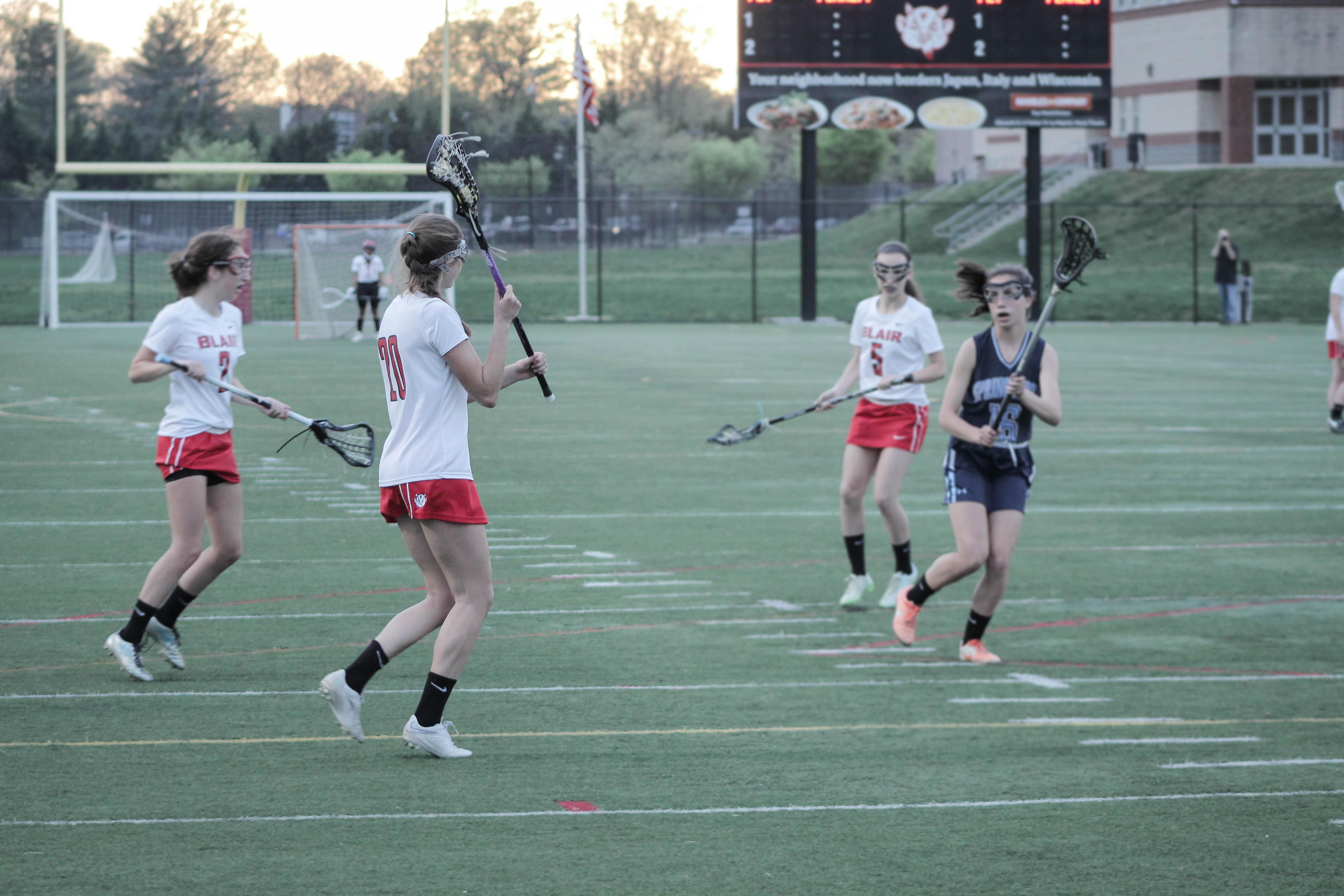 Photo: Blair struggled to maintain possession throughout the game.

Photo: Blair struggled to maintain possession throughout the game.

"I think our performance really picked up in the second half once the offense started working together and the defense shut down the fast breaks," said McPherson, "Because that's what really hurt us in the first half."
As the teams went into two three-minute overtimes, Springbrook found their stride and eventually managed to put in another three goals to Blair's one. Despite their best efforts, the game ended Springbrook 8, Blair 6.

"Even though we lost tonight, our team showed so much improvement," Spiezio said. "Honestly I feel like we outplayed them tonight. It felt really good to have so many assisted goals which is a big step from how we were playing more individually before."