A new "legacy" of special effects

"TRON" is a masterpiece of technology but not much else

Sam Flynn (Garret Hedlund) is a rebellious heir to the massive video game and computer company – ENCOM – owned by his father, Kevin Flynn (Jeff Bridges). Sam's father mysteriously disappeared twenty years ago, but Kevin's business partner Alan Bradley (Bruce Boxleitner) receives a page from Kevin's old office. Sam ventures into the arcade and discovers the Grid, the digital world his father had invented and subsequently became trapped in. Sam now has to save this world from Clu (Bridges), his father's digital clone who turned the Grid into a dark and tyrannical world.

The movie's visual effects make it enjoyable. The world director Joseph Kosinsky creates with the Grid is spectacular, and the audience feels immersed into a technological wonderland. Almost everything seen on screen is created from scratch in post-production, but the actors seamlessly fit into the world. The action sequences are both intense and visually spectacular.

While paying extra to see the movie in 3D might seem unreasonable, the use of 3D-technology parallels the visual splendor that "Avatar" created. Unlike some cheesy 3D movies that shall remain nameless, there are no "pop-out" moments, and the technology is used more to immerse the audience into the Grid.

The movie's soundtrack courtesy of Daft Punk adds to the hi-tech feel to the movie and is a highlight of the film. Daft Punk's techno vibes bring the movie back to its video game roots while providing a sense of sophistication.

Although the cinematography and soundtrack is spot on, the screenplay is not up to par. For example, the ending leaves the audience disappointed and comes far too soon after the movie's climax. It leaves many parts of the movie unresolved, and creates significant plot holes.

This film's downfall is the extremely poor dialogue and acting. There isn't much dialogue throughout the movie, as it is mostly action-based, but any time an actor speaks it is a cringe-worthy, unintentionally comedic moment. All of the lines are incredibly clichéd as well as delivered poorly.

Hedlund's performance is contrived and boring, and he simply cannot make his character believable. While the script can be mostly to blame, Hedlund still doesn't seem quite right for the role. He tries too hard to be an intense hero, but his demeanor makes him seem apathetic and uninteresting.

Ultimately, Bridges' performance is the biggest letdown. As last year's Oscar winner for Best Actor, Bridges should have brought much needed relief to the other actors' poor performances. Whether it was the poor screenplay or poor directing, Bridges does not live up to his repertoire. 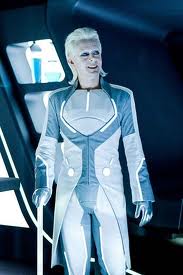 Photo: Michael Sheen shines in his small role as Zuse, a party host and confidant.

Photo: Michael Sheen shines in his small role as Zuse, a party host and confidant.

Michael Sheen's performance as the flamboyant party host Zuse is a bright moment in the movie, as his delivery is fantastic but unfortunately short-lived. His performance is the sole performance of note, which is disappointing as it was only a small supporting role.

Despite the poor dialogue and performances, the film is still entertaining and is propelled by an intriguing plot. "TRON" pays homage to the original arcade game, but it also goes deeper into the issues of society's dependence on technology as well as technology's growth. The fact that the programs in the Grid act like human beings and that Clu could take over the Grid makes the audience question their dependence on technology and whether technology's development is worth a takeover by society's own creations.