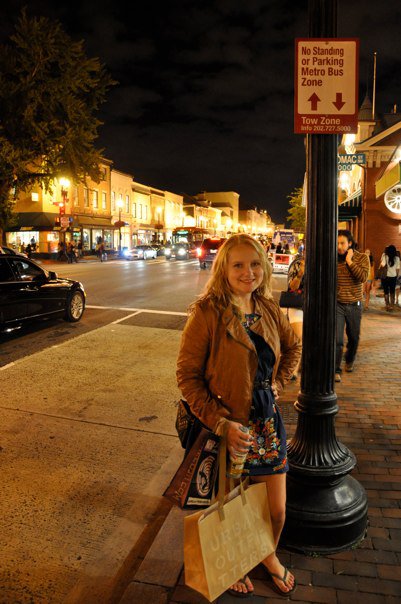 Name: Liv Jacobson
Position: Online Entertainment Editor
Graduation Year: 2012
Liv is from the class of 2012 and has greatly enjoyed her time on Silver Chips Online. She's most known for her entertainment stories, and thus came about her nomination as Entertainment Editor. She loves everything about pop culture and isn't afraid to admit it. SCO forever!

The varsity baseball team (2-1) defeated the Einstein Titans (0-3) by a score of 8-3. The game started off strong with Blair scoring four runs in the first inning. They prevented the Titans from scoring until the top of the fourth. The Titans attempted to come back from Blair's 6-0 lead, but the Blazers fought hard and kept their opponents at bay to secure their second win of the season.

Most of this year's Oscar nominated movies had very little commercial success, so there is not much drawing in the everyday movie-goer to this year's awards. But with Billy Crystal hosting, it is sure to be a good time.

Winter TV Preview: New shows to warm up to

With the holidays just around the corner, several new shows are scheduled to premiere that will keep you busy during snow days and lazy days alike.

Brooding music begins to play. Jacob runs out of his house with his shirt off, and the girls in the audience goes wild. Their ear-piercing screams, unfortunately, are probably the most entertaining part of the hour and half long movie.

Allegations of sexual harassment made in the 1990s from two National Restaurant Association employees arose against Republican presidential candidate Herman Cain on Oct. 30. Cain has admitted that the accusations were made, but claimed that he was falsely accused.

Ask Chips: The best article you will read on SCO. Ever.

Welcome to the first edition of Ask Chips (AC) for the 2011-2012 school year! As you may have noticed by the byline, we have an updated crew. The new girls in town are our beloved, stressed out news editor Valerie and our fresh meat Saaraa, who has an awesome name. And, of course, Liv (a.k.a. the funniest, most attractive and most entertaining member on staff) is still here to save you from all of your silly, mortal problems.

The Student Government Association (SGA) is holding several annual events this fall. The Inova Blood Drive is the first event of the year, followed by the annual Activity Fair and freshman class elections. Homecoming events begin the week of Oct. 10, a week earlier than last year and will be the main focus of this year's fall events. The SGA also plans to sponsor a homeless walk and blood drive in late fall, but those events are currently in the early planning stages, according to junior SGA representative Kathlyn Skolnik. Despite the absence of new fall activities, the SGA is looking to revitalize and get more students involved in their events, according to sophomore representative Amalia Perez.

Even though our minds are now adjusted to our back-to-school schedules, our stomachs are still not used to our new eating schedules, so our SCO nutritional expert is here to offer some nutritious, and delicious, snacks that you can make in no time!

For many of us witches and wizards, our style identity during the day solely relies on which house we're in. Some among us have broken the mold, however, and over the years have tried their best to remain fashion-forward. These unconventional trend setters define what has been "in" and "out" during their time at Hogwarts.

International News Roundup for May 21- June 3

Former Bosnian Serb military chief Gen. Ratko Mladic refused to admit to charges that he was responsible for the death of over 100,000 Muslims and non-Serbs during the Bosnian War between 1992 and 1995. Mladic is charged with genocide, extermination, murder, persecutions, deportation, inhumane acts and other crimes.

The fact that there is no front-runner candidate at this stage of the game proves optimistic for Obama's campaign and detrimental for the future of the Republican Party.

"Born This Way" comes to life

Lady Gaga is known for her avant-garde fashion sense, incredible stage performances and wacky music videos. Gaga's newest album "Born This Way" is a creative step upwards and is much more than a simple pop album.

The Blair crew team competed in the Stotesbury Cup Regatta in Philadelphia, Pennsylvania on May 20.

The varsity softball team (18-3) defeated the Sherwood Warriors (17-2) in a back-and-forth 8-6 game. The Blazers are the 4A West regional champions, and will compete in the Maryland State Softball Championship semifinals at Bachman Softball Complex on Tuesday, May 24.

The title song is nostalgic and reminiscent of summers past. A familiar, drunken pirate sets sail on a large ship, heading towards a mysterious goal. This time, the title is slightly different and a few key character change, but not much else.

Blair softball (17-3) defeated the Gaithersburg Trojans (13-5) in a nail-biter of a regional semi-final game. The Blazers will move on to compete in the 4A West Regional Championship against Sherwood on May 20.

Varsity baseball knocked out of playoffs

Blair baseball (13-8) lost its first playoff game to the Walter Johnson Wildcats (8-10) by a score of 6-4. The game was the last for head coach John McDonald, and he was not disappointed in his team's performance.

Here at SCO, our fashion expert Liv has picked the best thrift stores and flea markets that will satisfy your shopping needs without cleaning out your wallet.

Welcome, readers of SCO! You are part of a very lucky and blessed group to have come across the last Ask Chips this year. We know, we will be dearly missed.

Another spring break, another week spent alone while your friends travel the world (unless you are the one doing the traveling – in that case, hooray for you!). We here at SCO do not wish for you to be lazy and rot on the couch your entire break, so we have compiled a list of some of the quirkiest and most unknown museums right in our great backyard.

"Guys and Dolls" rocks the boat

The Montgomery Blair Players presented the classic Frank Loesser musical "Guys and Dolls" on Friday and Saturday night. This much-loved musical highlighted the Blair Players' extraordinary talents and emotionally engaged the audience. And though this performance shone brightly in many ways, the most memorable aspect of this production was the outstanding acting. All of the lead actors portrayed their characters with incredible depth, sang beautifully and carried off the musical's humor in a very convincing way.

The varsity baseball team (0-1) lost the first game of the season to the Northwest Jaguars (1-0) on Tuesday.

"I am Number Four" is number one

Of course, you may have heard this plot before. "I am Number Four" is one of the most fun, though not wholly groundbreaking, films of 2011 thus far.

The Grammy red carpet this year was full of surprises, but not in a good way. The award show is well know for its eccentric fashions but this year they mostly went sour, and while trying to be edgy and fashion-forward, most celebrities' styles turned tacky.

Brownies, red velvet cake and cheesecake – three scrumptious desserts that one would never imagine coming together do just that in this yummy treat, just in time for Valentine's Day!

There were a few redeeming ads among the rabble, and some others that just made us scratch our heads. Congratulations on the victory, Green Bay, but let the real battle begin.

B minor asks "When's the next bag of Ask Chips coming out!!?"Right now, so prepare yourselves, mortals.

Students from Kelly O'Connor's Theatre and Shakespeare classes will perform staged readings of "Cyrano de Bergerac" and "King Lear" on Jan. 12, 13 and 14 at 7 p.m. in the Blair auditorium, free of charge.

January Playlist: Get psyched to study

It's almost time for semester exams and Blazers are beginning to feel the stress that inevitably comes at the end of second quarter. There is good news! Inspiring, up-beat songs can help any Blazer beat the studying blues, and both classic and new pop jingles fit the bill. These terrific tunes might even help that slacking student to work hard and ace their exams.

Oh, what a year

Twenty-ten has been a whirlwind year of politics, scandal, celebrity drama and bad pop music. Let's take a look back on the events that shaped this exciting year as we look ahead to 2011.

A new "legacy" of special effects

A remake of the 1982 movie "TRON" and the original arcade game, "TRON: Legacy" is a unique addition to the video game movie genre that weaves the original game's play into an interesting plotline.

The state's first slot machine casino in Perryville, however, raised $2 million in the first four days of operation. While slot machines are an effective way to raise money for the state, the newly selected slot venue is a definite mistake.

Ask Chips: Back in style

A long, long time ago, in a galaxy far, far away, there once was a Silver Chips staple called Ask Chips (AC).

Freshman Morgana D'Ottavi placed tenth out of 135 at the 4A Girl's Maryland State Cross Country Championship on Saturday, with a time of 20:28.

Junior wins final round of Amateur Night at the Apollo

Junior Nathan Foley tied for first place with vocalist and cellist Ayanna Witter-Johnson for the final round of Apollo Theatre's Amateur Night in Harlem, NY, on Oct. 27.

Lindsay Lohan, Paris Hilton and Britney Spears all have one thing in common. No, it's not their several arrests, mental breakdowns or club-hopping lifestyle.

Freshman Morgana D'Ottavi runs swiftly through the trees at Wheaton Regional Park. Minutes later, she is the first runner at the finish line, wearing a smile.

The company's poor health and safety record should have been a cause of serious concern before millions of eggs had to be wasted and almost 2,000 people were infected with salmonella.

Change fans can believe in

It all started on the night of Sept. 12, when Washington pulled out a win against their rivals and one of the historically best teams in the league.

Sept. 10 would normally have been a boring Friday night for this reporter, who usually just catches up on her YouTube subscription box and old Jersey Shore episodes. This night, however, was a night of glamour, excessive spending and the occasional free Silly Band. This night was Fashion's Night Out in Georgetown.

Throughout September and October, Blair's Student Government Association (SGA) will hold multiple events, including the school year's first blood drive. Events begin Sept. 16 with the annual activity fair. The blood drive and freshman elections will be held the following week. Activities in October - including a spirit week, class hallway decorating, a pep rally and a tailgate party - will center on the homecoming game and dance.

Haynesworth: A lesson in sportsmanship

Over the past few months, Washington Redskins defensive tackle Albert Haynesworth has caused quite a stir both in the Washington area and across the nation.

An "Eclipse" over the past

The Twilight Saga is more than just a book and movie series: It's a phenomenon. "The Twilight Saga: Eclipse" is the third installment in the movie franchise and the third time lines have gone around the block at movie theaters nationwide for midnight showings. "Twilight” fangirls (and fanboys) won't be disappointed: "Eclipse" is the best so far in the series.

Ants on a log is a great healthy way to incorporate a sweet and salty treat into your afternoon snack.

This pita and hummus sandwich is an easy way to make your afternoon snack a little more exotic.

The brownies will be a mixture of red, white and pink (perfect for Valentine's Day!)

This recipe calls for what may seem like a large amount of ingredients, but many are pantry staples and the baking process is simple.

Senior Natsnat Mehreteab pushes hard to pass runners ahead of her near the finish line.