Junior wins final round of Amateur Night at the Apollo

Junior Nathan Foley tied for first place with vocalist and cellist Ayanna Witter-Johnson in the final round of Apollo Theatre's Amateur Night in Harlem, NY, on Oct. 27. Foley earned the title of "Super Top Dog" and won $5,000. 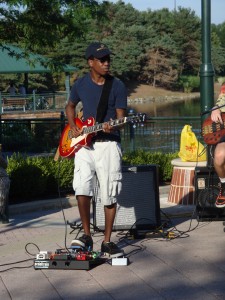 The amount of audience applause determines the winner of Amateur Night, and the competition's judges determined that the audience response for the two contestants were equal. Foley and Witter-Johnson, who is from New York, agreed to share first place and split the original $10,000 prize. Foley competed with a guitar rendition of "Maggot Brain" by Funkadelic, the same song that led him to win the past two rounds of competition as well as the Apollo's children's competition two years ago.

As the winner, Foley will ride on the Apollo Theatre's float along with music legend Gladys Knight during Macy's Thanksgiving Day Parade in New York City on Nov. 25.

Foley was the sole performer who played only an instrument, as his competition was comprised of vocalists who also played instruments as well as one dance group.

Foley came into the final round of competition with no expectations. "I didn't expect anything, if I had won or lost I wouldn't have been surprised," Foley said. Even without expectations, Foley was pleased with his win. "It feels good to win, and I'm five thousand dollars richer!" he said.

Social studies teacher Lansing Freeman, who went on the bus trip to see Foley's performance, was enthusiastic about Foley's talent. "I'm always happy to see one of our young people doing so well," Freeman said. "To see Nate possessing style and abilities to that extent was a beautiful, great thing."

Foley plans to use his prize money to purchase a new guitar and save for college. He plans to go to college to study music, but also plans to see what the future holds for him. "I'm just seeing what happens right now," he said.