Change fans can believe in

It all started on the night of Sept. 12. One of the oldest and strongest rivalries in the National Football League (NFL) met again as the Dallas Cowboys played the Washington Redskins on the latter's home turf, FedEx Field. All eyes were on the 'Skins to see how all of preseason's changes and downfalls would impact the team's performance. Washington went beyond what was expected and pulled out a win against their rivals and one of the historically best teams in the league.

Photo: The Sept. 12 victory against the Dallas Cowboys was a crucial win for the Washington Redskins, who have undergone many changes leading up to the 2010 season

Photo: The Sept. 12 victory against the Dallas Cowboys was a crucial win for the Washington Redskins, who have undergone many changes leading up to the 2010 season

As the NFL season goes into full swing football fans are eager to jump to conclusions about teams' chances for the season. The players, coaches and injury lists are all weighing heavily on sports pundits' – and mere fans' – minds. This year, the Redskins are a team that should be watched closely; their chances of improvement are high and this season could turn out to be one of their best.

This season is a year of change for the Redskins. New head coach, Mike Shanahan, who holds two Super Bowl titles under his belt, stepped in to replace Jim Zorn after a disappointing 4-12 2009 season. The Redskins snatched up former Philadelphia Eagles star quarterback Donovan McNabb to replace Jason Campbell, who fans considered to be a contributing factor to last season's lackluster record. The team's defensive strategy also switched from a 4-3 defense (four offensive linemen and three linebackers) to a 3-4 defense (three offensive linemen and four linebackers), a move which helped the 'Skins to stop the Cowboys on two of their three red zone possessions during the game. 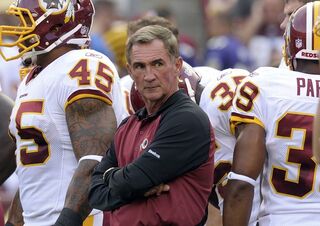 Despite the promising modifications to team management and strategy, the Redskins still endured a rough start in 2010. Defensive tackle Albert Haynesworth caused major controversy before the season started by refusing to participate in pre-season workouts and failing to pass Shanahan's conditioning test during training camp. Both McNabb and free safety Kareem Moore injured themselves during the Aug. 21 preseason game against the Baltimore Ravens and the team's preseason record was only 2-2, which didn't exactly bode well for this season's record.

After the Cowboys game, though, things seem to be steering towards victory for the 'Skins. Fans are finally warming up to the idea that this team could be a success for the first time in years – all because of an opening game.

The Redskin's loss to the Houston Texans on Sept. 19 is only a bump in the road for this team, as it was an incredibly close 30-27 game decided in overtime. The 'Skins led the game until the final minutes of the fourth quarter, when the Texans scored a touchdown to tie the game, and Houston barely won with a field goal in overtime. The 'Skins defense was strong, but Texan's receiver Andre Johnson was a force to be reckoned with. The team showed a lot of confidence in this matchup - perhaps a little too much confidence towards the end of the game. 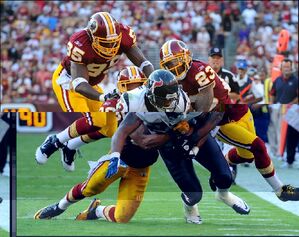 Photo: The Redskins suffered a tough loss on the Sept. 19 game against the Houston Texans, which put the team's new defensive strategy to a test.

Photo: The Redskins suffered a tough loss on the Sept. 19 game against the Houston Texans, which put the team's new defensive strategy to a test.

The key to the Redskins' success moving forward will most likely be McNabb. His performance at the Sept. 12 game was crucial to the team's success, as the QB possessed a total of 171 passing yards in that game alone. As a 12-year veteran of the NFL, McNabb has the leadership experience to bring Washington to the forefront of the league.

What may either make or break this team in the long run, however, will be its ability to cope with controversy. Running back Clinton Portis made inappropriate statements to a local radio show regarding TV Azteca reporter Ines Sainz, who was allegedly sexually harassed in the New York Jets locker room. This, on top of the Albert Haynesworth controversy of the preseason, brought extremely unnecessary drama to the team in their rebuilding period. So far the team's ability to not let the outside controversies affect their play bodes well for the rest of the season.

From the upset win against the Cowboys to a close loss to the Texans, things are looking up for last season's underdogs. Redskins fans are in for a season of surprises, as this team's new beginning will hopefully propel the team to greatness.