In early May 2010, word spread of a salmonella outbreak found in eggs and massive recalls were put into effect around the country. It was the largest egg recall in history, with 500 million eggs taken off supermarket shelves. The Food and Drug Administration (FDA) found the Wright County Egg farms in Iowa to be the main producer of these contaminated eggs. The company's poor health and safety record should have been a cause of serious concern before millions of eggs had to be wasted and almost 2,000 people infected with salmonella. 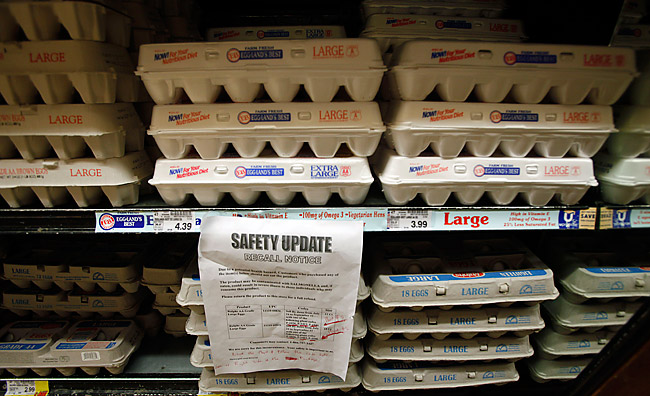 Photo: Over 500 million eggs were recalled after an outbreak of salmonella was found to be originated from Wright County Egg farms in Iowa.

Photo: Over 500 million eggs were recalled after an outbreak of salmonella was found to be originated from Wright County Egg farms in Iowa.

On Sept. 22, Wright County Egg owner Austin "Jack" DeCoster appeared before a congressional panel to explain the reason for the outbreak and the poor conditions found at his farm. Instead of taking responsibility for the farm's lack of action, DeCoster placed the blame of the outbreak on the meal that the chickens were being fed. The FDA, however, found several other possible sources of the contamination at the Wright County Egg farms.

Decoster's company has had over 30 years of health and safety violations, ranging from pest infestations, mishandling of chickens and extremely poor sanitary conditions. Workers were known to have also been severely mistreated and subject to an unsanitary environment. Even though Wright County Egg had internally discovered almost 500 cases of salmonella in less than two years, they did not report them to the FDA until the agency found the records after the outbreak.

Sanitation and worker safety are common precursors to more serious and wide-spread health issues. Filthy farm conditions can cause salmonella, so if a farm simply ignores blatant health violations like Wright County Egg did, such a large outbreak should not be a surprise.

The House of Representatives proposed a food safety bill that would allow the FDA more power to investigate and stop the spread of food-born illnesses. The bill must be passed to ensure the safety of the American people from a virus that is naked to the human eye.

Stricter FDA rules on the practices of egg farms were put in place in July, but this new bill could help FDA investigations of outbreaks and allow more severe punishments for violations. This bill would also help the agency to increase the safety of other foods such as meats, vegetables and dairy products which also carry the salmonella virus.

The FDA has a responsibility as a part of the federal government to protect the people of the United States. Despite the numerous warning signs of conditions that could cause salmonella, little was done to until millions of eggs had to be taken off shelves and thousands of people were infected with a serious illness. Congress must allow the FDA to be able to see how bad situations are at other food production facilities and to prevent another record-breaking salmonella disaster before it strikes.