Twilight, you are no Harry Potter.

Brooding music begins to play, and the crowd hushes with the hope that the fourth "Twilight" movie will be as good as the last few. Jacob (Taylor Lautner) runs out of his house with his shirt off, turns into a werewolf and the crazy mob of girls in the audience goes wild. Their ear-piercing screams, unfortunately, are probably the most entertaining part of the hour and half long movie.

The entire problem this film faces is that it should not be a movie on its own. If it had included the entirety of the "Breaking Dawn" novel it would be much more fast-paced and interesting, as the ending of the book is probably the most exciting part. But no, movie producers will be movie producers; they had to milk the multi-million dollar franchise for what it was worth. Hey, if the "Harry Potter" series could pull it off, why couldn't they? The big difference is that "Harry Potter" actually has incredible substance, and "Twilight" has the complete opposite. Almost the entire book series is based on long descriptions of self-pity and then a couple of fight scenes. The lack of substance really brings this movie to its demise.

The movie's pacing is so incredibly slow that one finds themselves looking at their phone to check the time and realizing that while the movie is halfway through, the newlyweds are still on their honeymoon. They seem to be on an island for absolutely way too long, where they play chess, skinny dip and try to figure out whether there is a demon child eating Bella from the inside. The purpose of the prolonged vacation is probably to engage the audience in their relationship, but honestly the chemistry between Stewart and Pattinson is so unromantic and awkward that the whole romance aspect of these movies has lost its touch. 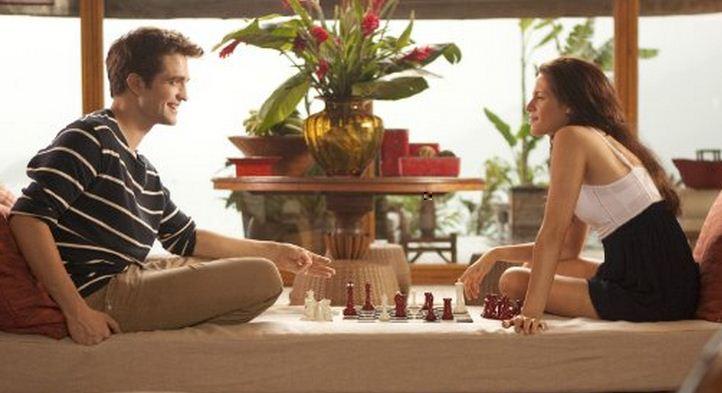 Photo: Edward and Bella play what seems to be an excessive amount of chess while on their honeymoon.

Photo: Edward and Bella play what seems to be an excessive amount of chess while on their honeymoon.

Futhermore, acting has never been the series' strong suit, and this movie is certainly not a step up. Stewart maintains the same lackluster and unemotional performance as always, and she sometimes seemed too unemotional even to pull off being an emaciated mother-to-be of a half-undead baby. Pattinson's and Lautner's performances are alright, but neither one's acting is particularly great either. The best character in the entire movie is Bella's dad played by Billy Burke. He is the sole comedic relief, and brings some of the only intentional laughs from the audience.

Stylistically, the movie is well-made and visually appealing (apart from the computer generated werewolves that are still completely unrealistic), but the movie tries and fails to overcompensate for its lack of plot with pretty camera shots of nature and actors' soulful gazes. The wedding scene was quite picturesque, with beautiful flowers and a gorgeous dress that many fans will probably pre-order years in advance of their weddings, and the honeymoon setting is beautiful.

But despite a few far-between highlights, this movie is not worth anyone's money (although that didn't seem to deter anyone opening weekend, when it grossed $140 million). The whole second half of the movie is incredibly gross, and throughout the entire film one is left waiting for it all to just end. If you must see this movie, hold out for Netflix or some other way to watch it for free, and even then prepare a puzzle or something to play with while you're waiting for something interesting to happen (a warning, though, you may become more engrossed in the puzzle than the film at hand). A bucket nearby might be a good idea, too.