Haynesworth: A lesson in sportsmanship

Over the past few months, Washington Redskins defensive tackle Albert Haynesworth has caused quite a stir both in the Washington area and across the nation. In April, Haynesworth expressed his disagreement with the coaching staff's new defensive strategy. He refused to participate in head coach Mike Shanahan's off-season workouts, and talks of a trade began, but then Haynesworth decided to stay with the 'Skins and receive a $21 million bonus. Even after this, Haynesworth decided not to attend workouts, disappointing both the Redskins organization and his fans. 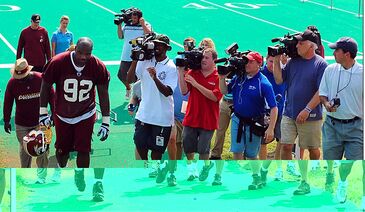 Photo: Redskin Albert Haynesworth received negative press attention for his actions over the past few months, including taking 10 days to pass a simple conditioning test at training camp.

Photo: Redskin Albert Haynesworth received negative press attention for his actions over the past few months, including taking 10 days to pass a simple conditioning test at training camp.

The only way Haynesworth could prove himself to be worth the Redskins' time and money was to pass a simple conditioning test at the beginning of training camp. Haynesworth, however, failed to complete the test until the tenth day of training camp, Aug. 7. By refusing to work with his team in the offseason or train to reach his full potential, Haynesworth wasted the time and energy of his teammates and the Redskins' staff and caused an unwanted media frenzy for the franchise.

Haynesworth's actions have left a dent in his reputation, but his example can teach athletes everywhere about how not to act when a part of any team.

The first lesson any athlete learns is how to take direction. The coach is boss, no matter what. Especially if you have a $100 million contract that requires you to take his/her direction. Refusing to attend conditioning just because of a strategic disagreement shows poor sportsmanship and hurts both the team's and player's credibility. An athlete who does not follow his coach's direction risks losing his team's respect.

Another lesson to be learned: Practice makes perfect. If Haynesworth had practiced with his team in the off-season, there wouldn't have been a conditioning test to pass, and he would be fit to practice with his team. Even when one is a professional, one must practice to keep his/her job.

Most importantly, one can learn that each team member's actions affect the whole team. Haynesworth's lack of practice in the offseason prevented the rest of his team from practicing with an integral player. Every team member's performance matters, so every individual teammate should strive to work hard.

While this preseason's actions have blemished Haynesworth's image, reputation is something that can be repaired by a good performance during the season. But that can't be said for every athlete; for a high school athlete, for example, this kind of attitude would simply result in his/her dismissal from the team. Every athlete - especially every Blair athlete - needs to remember that some professionals should never be emulated.