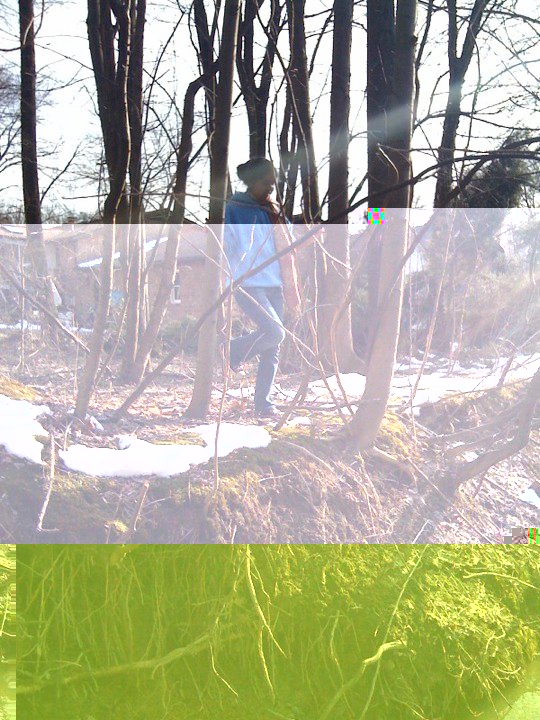 Name: Saaraa Farooq
Position: Online News Editor
Graduation Year: 2013
Saaraa Farooq, yes, she has an abundance of A's in her name, just don't ask what her middle name is. She can be found watching Doctor Who, listening to music (ATL, The Beatles, ARTTM, rock, alternative, and all that good stuff...), or taking pictures of random moments in life.

Three Blair teams competed in the Maryland Regional Science Bowl on Jan. 19 at Montgomery College. Teams A and B placed second and third respectively, losing to a team from Rockville High School. The competition comprised 45 teams from 25 schools in the region. Rockville will advance to Nationals, beginning April 25 in Washington D.C.

Last week, Montgomery County Ride On buses started to display ads featuring pictures of Blair students' eyes as part of a Montgomery County campaign targeted at high school students in the Four Corners area to improve pedestrian safety in areas with the highest densities of collisions.

HealthChips is here to offer you tips on how to balance the many commitments you hold in your busy schedule, so that you don't have to sacrifice sleep, sanity or social life.

School's back in session and summer's almost over. Let's face the facts, no more staying up until hours late at night expecting to sleep through the next day. Yes, we know, waking up early again is a pain while many still haven't gotten out of that wacky summer sleep schedule (nocturnal, anyone?). But don't fret, help is here!

Substance abuse is a growing problem among adolescents and it needs immediate action for prevention and treatment. According to Teen Health, in the past year, 70.6 percent of high school students admitted to alcohol usage.

On May 11, Blair's new yoga club had its first introductory meeting. Junior Elizabeth Liu, the club's president, with the help of the vice president, Elena Polozova, and officers Charmi Patel, Carol Shou and Thomas McHale put the club in motion.

The Northwest Jaguars (7-5) beat the girls' varsity lacrosse team (8-4) with a final score of 20-11. Blair took the game slowly in the first half with Northwest scoring first, after a strong offensive attack in the first minute of the game.

EMS fee not worth the money

When people already have to pay for rising medical bills and ridiculous amounts of medication, adding another fee for emergency services would seem to be excessive. However, on April 17, the Montgomery County Council reintroduced executive Isiah Leggett's proposed legislation to establish an ambulance fee. He asked the Council to reconsider the fee because of state actions that have intruded on Council taxing authority and a possibility of a shift in half of teacher pension costs.

From March 28 to April 1, freshmen Max Kronstadt and Javier Lopez-Casterno competed in the Ice Hockey National Championships in Wayne, NJ, with their team, the Montgomery Blue Devils (U14). The team came within a point of making the quarterfinals at Nationals and finished the season with a record of 28-13-4.

The girls' varsity lacrosse team (2-1) defeated the Gaithersburg Trojans (0-3) by a score of 14-4 in its third game of the season. The Blazers picked up the pace and built a lead before the first half was over.

After tonight, the "Hunger Games" books may be left in the shadows, but they will not be alone.

Where some win, others lose

New regulations for the gifted and talented education system will classify and track a child as young as three-years-old.

Several bills in the Maryland General Assembly are intended to expand the definition of criminal harassment to include forms of electronic messaging.

With 2012 peeking through the windows, we're looking back at everything that made 2011 what it was. This year has brought both epic and short-lived endings, tragedy, entertainment and success. Now, let's see what really defined 2011 as we greet the New Year.

Sweet tunes for the holidays

This November, Blair introduced its fifth honor society, the Science National Honor Society. Senior Sherman Leung created the chapter to recognize and honor students who excel in the sciences.

While you all wait for that delicious turkey and pumpkin pie to finish cooking, we're here to recommend heartwarming, family classics to keep the holiday spirit up. These five Thanksgiving movies provide moments of loving family and the fully capture the spirit of the season.

Ask Chips: The best article you will read on SCO. Ever.

Welcome to the first edition of Ask Chips (AC) for the 2011-2012 school year! As you may have noticed by the byline, we have an updated crew. The new girls in town are our beloved, stressed out news editor Valerie and our fresh meat Saaraa, who has an awesome name. And, of course, Liv (a.k.a. the funniest, most attractive and most entertaining member on staff) is still here to save you from all of your silly, mortal problems.

The Siemens Foundation recognized six seniors as semifinalists in the individual division of the 2011 Siemens Competition. Maryland had a total of 10 semifinalists, six of whom are from Blair.

Playing by the rules pays off

On Sept. 27, seven people were arrested in an SAT cheating scam in Long Island, NY after a 19-year-old sophomore at Emory University was arrested for accepting money to take the SAT for several students.

Fall Playlist: Getting out of that funky mood

It's time to take a short study break and let loose with some energetic tunes and upbeat lyrics.

Blair's sports programs are being restructured in order to involve the program with the school community and encourage student participation.

An intergalactic battle in the west

The merging of two very different genres, a western and sci-fi adventure sounds suspicious when put into the three words "Cowboys and Aliens". But the director Jon Favreau does not disappoint with this strange mash up.

On July 17, Casey Anthony will be freed from jail just two weeks after she was acquitted on July 5 for various counts including first-degree murder in relation to her daughter Caylee Anthony's death.