On July 17, Casey Anthony will be freed from jail just two weeks after she was acquitted on July 5 for various counts including first-degree murder in relation to her daughter Caylee Anthony's death. Although this date seems soon, it was delayed from Anthony's original release date of July 13 because Anthony was found guilty of misconduct for lying to the police about her missing daughter.

Many people out there are probably outraged at the jury's 'not guilty' verdict and believe that it was an injustice to Caylee. People may believe that Casey Anthony deserved to be punished because she was responsible for her daughter's death. People may also be shocked at how the jury could make this decision, a decision of life or death, in a mere eleven hours. The public has been labeling this trial as the new O.J. Simpson case because he was also acquitted of all allegations set upon him when he was accused of murdering his ex-wife Nicole Simpson and her friend Ronald Goldman. 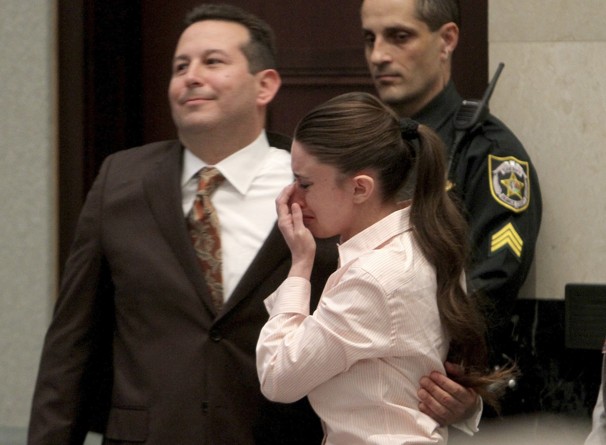 Photo: Casey Anthony and her attorney show relief after the verdict was delivered.

Photo: Casey Anthony and her attorney show relief after the verdict was delivered.

According to The Washington Post, the final sentence for Anthony was four years in jail, but she was credited with the time she already served, adding up to at least 1000 days. Anthony's sentence was based on the guilty verdict of misconduct because she did not report her missing daughter for thirty-one days in 2008 which eventually led to numerous lies to the police to cover up Caylee's disappearance. This behavior added a few more days to her sentence, but it still did not appease the public. The fact that Anthony did not report her missing child for as long as she did is simply not acceptable and makes her argument considerably elusive.

Though anger about the verdict is justified, the prosecution did not have any direct evidence linking Anthony to her daughter's death. Due to the insufficient evidence, the jury was not able to convict Anthony and so the jury should not be blamed for the lack of punishment. The issue was that the prosecution failed to provide evidence in support of their argument, so punishment could not be given since the crime could not be proven in the first place. Casey Anthony may or may not be guilty for all of the allegations posed upon her, but the fact is that there was no evidence which directly pointed to her as the murderer. This fact is true whether or not anyone chooses to believe she committed the crime. If the accusations are true, then of course she should be punished. However, since her argument did appear to be a bit farfetched, these suspicions cannot be held as the grounds to convict her even if the allegations posed upon her are true.

As a result of Anthony's fishy argument, the prosecutors and a wide range of media commentators tried to portray Anthony as a careless, party girl based on photographs and recordings of her partying with friends to exhibit that she was not grieving. Prosecutors asserted that Anthony killed her child so that she could spend time with her boyfriend and enjoy a carefree life of partying. The defense argued from the beginning that Caylee drowned accidentally in her family's swimming pool and that Anthony and her father, George Anthony, concealed her death in a panic. Prosecutors were hurt by the fact that it is not known exactly how or when Caylee died because her body was too badly decomposed to determine the cause of her death.

Nevertheless, whether or not justice was reached in the courtroom, the jury should not be held responsible even if they were wrong because they reached their decision based on the evidence they were given. Anthony was held accountable for the actions that were successfully proven, but she cannot be punished based on suspicions that don't have strong evidence behind them.

After the long and frustrating trial in the fight to obtain justice for Caylee Anthony, it can be agreed that a debacle like this should never happen again. Whether it is child abuse or even an accident, greater efforts should be made on both sides of the courtroom to obtain justice, not a fight simply to label one side the victor because of lack of evidence on the other.