On Feb. 24, County Executive Ike Leggett announced that the inaugural Montgomery Serves Awards Ceremony will take place on April 30 at Imagination Stage in Bethesda. The annual event, which is organized by the Fund for Montgomery (FFM), Montgomery County Volunteer Center and the Corporate Volunteer Council of Montgomery County, will honor the County's outstanding community leaders and volunteers. 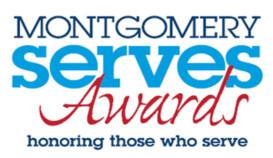 Photo: The Montgomery Serves Awards ceremony will be held on April 30 to honor those who provide extraordinary service in the community.

Photo: The Montgomery Serves Awards ceremony will be held on April 30 to honor those who provide extraordinary service in the community. Photo courtesy of www.montgomeryserves.org.

Leggett and the Office of Community Partnerships created the FFM to raise private funding to continue community building events, including Martin Luther King, Jr. Day, World of Montgomery Festival, Community Service Day, and other ethnic heritage events. Leggett encouraged residents to submit nominations of individuals, businesses and community groups for the Montgomery Serves Awards. "Montgomery County is the very special place it is today in large part because many extraordinary public citizens work every day to make it special," he said in a press release.

FFM is accepting nominations for the two different categories of community service awards until March 19. The first category includes the Neal Potter Path of Achievement Awards, where two residents ages 60 and older will be selected for their lifetime of volunteer service to Montgomery County. This annual award was named in memory of former County Councilmember, County Executive and civic activist Neal Potter.

The second category of awards includes the 2011 Montgomery Serves Awards. These awards recognize special volunteer accomplishments during 2011 in three different categories: the Youth Service Awards for people up to 18 years old and youth groups; the Corporate Service Awards for businesses or corporations encouraging employees to be community volunteers; and the Community Service Awards for exemplary volunteer service by individuals or community organizations.

Leggett will also present the first Roscoe R. Nix Distinguished Community Leadership Awards at the ceremony. This award honors the late Roscoe Nix, who served half century as President of the Montgomery County Branch of the National Association for the Advancement of Colored People (NAACP) and was a member of the Montgomery County Board of Education. "Thanks to the generosity of the sponsors of the Fund for Montgomery, the County will be able to recognize residents who have given selflessly to help our neighbors in need and improve our quality of life," Leggett said in the press release.

Additional information along with nomination forms can be found here.