Last Friday, the Siemens Foundation recognized seniors Andrew Zhang, Arec Jamgochian, Frederic Koehler, Maureen Lei, Nina Lu and Ziyao Wang as semifinalists in the individual division of the 2011 Siemens Competition. Maryland had a total of 10 semifinalists, six of whom are from Blair. Blair did not have any regional finalists. 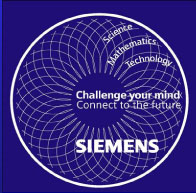 Photo: Six seniors placed as semifinalists in the 2011 Siemens Competition. They submitted projects in the fields of science, math and technology.

Photo: Six seniors placed as semifinalists in the 2011 Siemens Competition. They submitted projects in the fields of science, math and technology. Photo courtesy of Siemens foundation.

The Siemens Foundation awards high school students whose research projects display extraordinary innovations in science, math and technology. According to the foundation, an all-time record of 2,436 students entered the 2011-2012 competition and 1,541 projects were submitted. The other semifinalists from Maryland were from Poolesville High School, Richard Montgomery High School and Baltimore Polytechnic Institute.

The Blair students who entered the competition began their projects over the summer and spent time during the rest of their summer and the beginning of the school year to submit them to the competition. In order to enter, applicants are required to write a formal paper about their research project and submit a letter of recommendation from their mentor. "Everyone had a strong project and I think anyone had a chance of winning," Wang said.

Zhang completed his project on the "Identification of Genes Essential to Mammary Gland Development," in which he focused on genes responsible for the cell memory of induced stem cells. Zhang believes that his award is the cherry on top of a positive research experience. "My lab was great, and I got work done, so it was a pleasant surprise," he said.

Jamgochian, another semifinalist, acknowledged that through entering the Siemens competition, he gained a great amount of knowledge and academic experience. "This experience taught me a lot. Just writing my paper took so much effort, and it made all my other work seem immaterial," he said. "The composure I had to work on my Siemens project, especially in the short amount of time I had, really makes it easy now for me to get straight to work on other assignments now, knowing how little time and effort they take compared to my project."