From March 28 to April 1, freshmen Max Kronstadt and Javier Lopez-Casterno competed in the Ice Hockey National Championships in Wayne, NJ, with their team, the Montgomery Blue Devils (U14). The team was in the Bantam (14 and under) AA age division and played in Tier II 14U in the national championships. The team came within a point of making the quarterfinals at Nationals and finished the season with a record of 28-13-4. 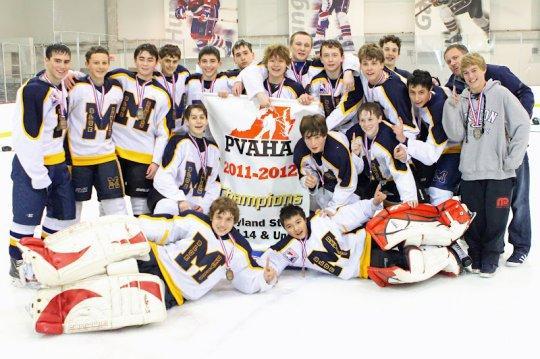 Photo: Freshmen Max Kronstadt and Javier Lopez-Casterno went to Hockey Nationals with their team, the Montgomery Blue Devils (above).

Photo: Freshmen Max Kronstadt and Javier Lopez-Casterno went to Hockey Nationals with their team, the Montgomery Blue Devils (above).

Hockey Nationals is a country-wide tournament for AA and AAA level hockey teams. For the Blue Devils' AA division, district affiliates held state championships in March to determine who went to Nationals. At States, the two highest ranked teams competed in a best of three series. The Blue Devils faced the Metro Maple Leafs, who finished one point ahead of them and beat them twice during the regular season. The Blue Devils won the first game, 6-2, and the second game, 2-1, awarding them a place at nationals.

At Nationals, teams were divided into three classes: teams from states with the most players are put into a top-16 tournament, followed by the middle and lower groups. The Blue Devils were the third lowest ranked team out of the 12 teams in the middle group. The middle group consisted of two groups of six teams, each playing three round robin games. The top four in each group qualified for the quarterfinals and then played a bracket-style tournament. "We went 1-2, and we needed this one team to beat another for us to get in, but they lost, so we just missed qualifying," Kronstadt said.

The Blue Devils lost their first game at Nationals against the Affton Americans (MO). "We knew they were going to be good, because they were ranked number eight in the whole country, going into the tournament, which was the highest in our section," Kronstadt said. "We lost the game 5-1. Overall, I think our team played a pretty bad game. We were disappointed, but our hopes were high because they were the top team in the tournament and we had played badly and still made a game of it."

The next day, the team played the Alaska All-Stars. The Blue Devils took an early lead of 2-0, but three consecutive goals by the All-Stars handed the Devils a 2-3 game, going into the third period. "In the third, we played some of our best hockey of the season, and had some great chances to tie up the game, but we didn't convert. It was a tough loss," Kronstadt said.

The following morning, the Blue Devils played the Providence Jr. Bears (RI), who needed one win to qualify. The Blue Devils' goal was to not end up with a score of 0-3, which was what last year's Montgomery AA team had. "We all knew just winning a game in that kind of atmosphere would be a great experience. We started out the game strong, but fell behind because of a fluke goal off one of our defenseman's head," Kronstadt said. "In the third, we trade chances for a while, but eventually scored two and made it 3-1. Our goalie played a stellar game, and we won 3-1. It was a fitting end to a great season."