The Northwest Jaguars (7-5) beat the girls' varsity lacrosse team (8-4) with a final score of 20-11. Blair got off to a slow start after a Northwest goal in the first minute of the game.

Junior Caren Holmes had Blair's first breakthrough, scoring a goal in the middle of the first half, with the Jaguars already up by 3. But immediately after, the Jaguars tightened up their defense not letting Blair get toward the goal. The Blazers were aware of their weak starts, but tried to push past it. "We started out slow, which is something we've been trying to get over, but I think this game brought us back down a level," senior co-captain Rachel Smith said. 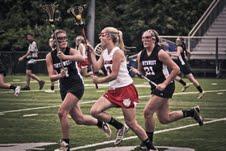 Photo: Junior Caren Holmes was a key player in the game, showing great effort whenever she got the chance to score a goal.

Photo: Junior Caren Holmes was a key player in the game, showing great effort whenever she got the chance to score a goal. Photo courtesy of Emma Howells.

The Blazers kept up their line of defense by closely guarding the Jaguars to prevent further scoring. Co-captains Julia Lewando and Rachel Smith, and junior Lisa Bianchini made three goals towards the end of the first half, speeding up the cautious play from earlier. Bianchini and Holmes were key players in the game with their clutch scoring. "Caren was great, she never gave up in the game," sophomore Amalia Perez said.

Northwest ended the first half with 12 goals as the Blazers trailed by six. Though the Jaguars were up, Blair's tenacious defense wouldn't allow the goal differential to increase.

Despite a goal early in the second half by the Jaguars, Blair's back and forth passes effectively kept the ball away from Northwest. Though, Northwest got in another goal, it was Blair's effective passing that helped Bianchini assist Smith in scoring immediately after the Jaguars, leaving Northwest up by seven. Along with five additional goals by Northwest, in addition to two more goals by Holmes and a final goal by sophomore Leila Bartholet, the Blazers finished their last regular season game, losing 20-11.

Though the Blazers felt the game was not reflective of their season as a whole, the team was happy with the effort they put in. "We never gave up and kept going," Perez said.

The varsity girls' lacrosse team will play its first playoff game against Einstein at 6:00 p.m. on Friday, May 11.