The "Stop Online Piracy Act" (SOPA) must specify its targets

Teenagers go on the internet everyday and download free music—stolen music—making their favorite artists, whose songs they just downloaded, lose hard-earned money. However, the teens aren't the main source of the problem; illegal downloading can almost always be traced back to pirates. Pirates, rogue websites, are all over the Internet offering free media to millions of people illegally. 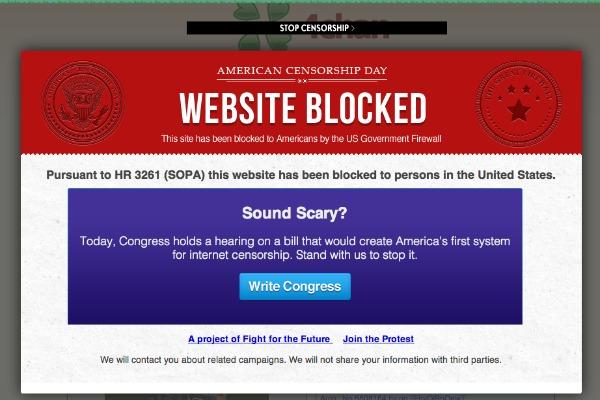 Photo: This is what could happen to websites that are blocked by the Stop Online Piracy Act.

Photo: This is what could happen to websites that are blocked by the Stop Online Piracy Act.

Online piracy is wrong because it unfairly causes both artists and websites lose money. Nevertheless, people continue to do it and the efforts to stop piracy aren't strong enough. More effort needs to be put into the cause, without barring the freedoms of online expression.

House committee hearings were held mid-November regarding the "Stop Online Piracy Act" (SOPA), which was introduced on Oct. 26. The act outlines what instances of "infringement of intellectual property" and piracy are; its goal is to cut off business to those accused of infringement. Unfortunately, the bill's parameters are too broad. They do not specifically target rogue websites that organize the distribution of pirated material, which are the source of the problem, so the legislation ends up unintentionally harming internet users. Those who were previously protected by past legislation now may be subject to infringement accusations because of the bill's generality.

According to the International Federation of the Phonographic Industry (IFPI), in 2008 around 40 billion music files were shared illegally, equating to a piracy rate of about 95 percent of all music downloads worldwide. The victims of this rampant illegal behavior are the makers of the downloaded material, such as musicians, authors, software designers and moviemakers. These affected groups support SOPA so that they can gain what they actually deserve.

In addition to being general, the legislation could infringe on the right to free speech on the Internet. The bill states that copyright owners could contact payment providers and advertising networks to cut off business to pirating websites by filing notice that the website is involved in intellectual property infringement. Accused websites will have five days to argue their innocence, and sites that are wrongly cut off from business cannot sue payment providers.

The House may not mean any harm by the bill, but SOPA doesn't directly link its provisions to the websites they aim to stop. Instead, the bill simply provides a broad statement on what is considered pirating and what actions would be taken as a result, without specifying who exactly can and cannot be punished for infringement. If the act of depriving a website of money is so simple, then the bill could ultimately lead to hindrance of free speech. Websites could to be cut off from business or even shut down because they unknowingly violated the bill.

Photo: These are some of the major websites speaking out against the legislation who took out a full-page ad in The New York Times to express their opinion.

Photo: These are some of the major websites speaking out against the legislation who took out a full-page ad in The New York Times to express their opinion.

SOPA is intended to protect intellectual property and is supported by a many top name groups - the Motion Picture Association of America, U.S. Chamber of Commerce, countless lobbyists and media firsm - but for amateur artists and musicians it's a bit different. SOPA does protect the intellectual property of artists, making them able to pursue a profit, but content that would be prohibited under SOPA would include amateur remix works. Remix works, such as covering songs on YouTube, would be considered copyright violations. This hurts both the original artist and the amateur, even though the legislation was only trying to help the original artist. SOPA is not targeting amateur artists but because they are violating copyright laws they would be taken down along with illegal sites.

The provisions in the bill could also go as far as to hurt websites that are already covered by the 1998 Digital Millennium Copyright Act, which protects sites such as YouTube that may unknowingly contain pirated content, but are required to remove it when notified. Websites such as Yahoo, Google, Facebook and the Consumer Electronics Association are working together to fight the bill, arguing that it would give the government too much power being able to shut down sites accused of pirating.

The bill proposed by the House has the right idea of focusing on payment systems and ad networks to cut off business to rogue sites, but there are serious issues that need to be worked out. All of the bill's provisions should focus on the rogue websites that carry out the majority of the piracy, not domestic sites that abide by the Copyright Act.