Wearing a photo of a marijuana leaf on his shirt got a student at an upcounty high school sent to the principal's office a few weeks ago. The Montgomery County Police then searched the boy's bedroom and found his marijuana stash, and the boy's mother asked the officers to arrest her son. 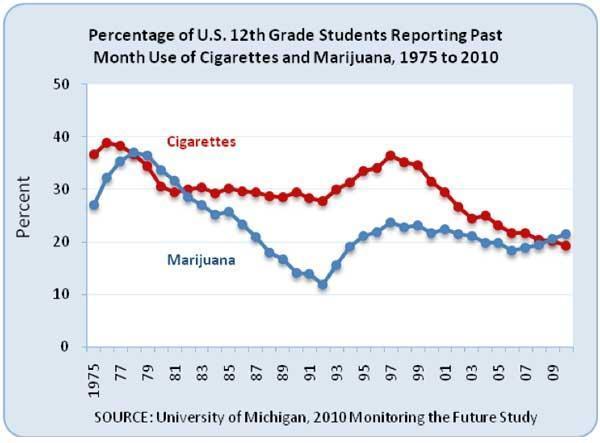 Photo: The National Institute on Drug Abuse (NIDA) reported that 21.4 percent of high school seniors used marijuana in the past 30 days, while 19.2 percent smoked cigarettes.

Substance abuse is a growing problem among adolescents and it needs immediate action for prevention and treatment. According to Teen Health, in the past year, 70.6 percent of high school students admitted to alcohol usage. The National Institute on Drug Abuse (NIDA) reported that, in 2010, 21.4 percent of high school seniors used marijuana in the past 30 days, while 19.2 percent smoked cigarettes. But due to several cuts in funding for prevention programs and treatment centers, it is difficult for these programs to be effective.

Officer Russell Larson told this story to parents, students and school leaders on Wednesday, May 16. About 75 community members attended the Montgomery County Council of Parent Teacher Associations' community action forum on teen drinking and substance abuse that Wednesday. A panel of police, school board members, nonprofit leaders and a treatment specialist reinstated their commitment to fighting substance abuse. This forum followed a previous one held on May 3 in Damascus regarding increase in opiate abuse in the county.

The event was primarily held to have a discussion but instead many of the participants wanted their questions answered. Since fiscal 2010, federal, state and county cuts decreased funding for treatment centers, prevention programs and the county's school resource officer program, a program that places officers in schools.

The budget cuts significantly reduced the progress that has been made in prevention and treatment for adolescents in the county. In 2011, Congress cut funding for Safe and Drug-Free Schools, a prevention program in Montgomery County schools that was funded through federal grants. When drug abuse is a huge problem in adolescents, it does not make sense to cut back on funding to reduce the problem.

Around 1,500 interventions a year took place in the county's middle and high schools combined through the program. Now, there is no county-wide intervention program. Though prevention education still exists in the tenth grade curriculum and counselors are available, there is not a large enough effort being made for intervention. According to Eileen Shea, the program director of Gaithersburg's Student Help and Academic Resource Program (G-SHARP), if the parents at the meeting did not give their opinions in the discussion, nothing would change.

The budget cuts call for the need to create nonprofit organizations or take other actions to address the problem. Greg Richter, from Fairfax nonprofit Parents Reaching Out to Educate Communities Together (P.R.O.T.E.C.T), was on the panel in the discussion and believes that organizations need to take action to reduce the problem. He is right to say that there needs to be action taken, but also, more funding needs to be devoted to the cause.

A greater effort should be made to provide more funding to the programs such as P.RO.T.E.C.T. and G-SHARP so they can continue to help teens and their parents with preventing and fighting drug abuse. The public should be made aware of the increasingly negative effects on progress with fighting substance abuse that the budget cuts caused. Cutting the funding for these programs only puts the prevention process in reverse, increasing the amount of teens using drugs. Taking money out of a cause that needs support is not the answer if it means putting teens' health at risk.