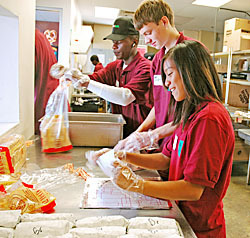 For a Redskins fan, it's hard to beat free admission, a private entrance to FedEx Field and all the free food you can eat. At the Sept. 11 season opener, 18 Blazers got this very deal, but they didn't see a second of the game.

Using the noise level of the crowd as the scoreboard and the number of customers as the game clock, these Blazers worked for nine hours, operating a concession booth at FedEx Field. Although they receive no pay, the money they earn benefits Blair's instrumental music department.

The Blair Band and Orchestra Patrons (BBOPs) organized the first season of the FedEx Field concessions project. According to Dustin Doyle, Blair's instrumental music director, the BBOPs raised about $3,000 for the program last year. Doyle says that this year, the goal is $10,000 to $12,000. The money pays for sheet music, instrument repairs and bus rentals for festivals. Volunteers are rewarded for their hard work throughout their musical education.

For the eight home games this season, Varrone arrives at least five hours before kickoff. Parent and student volunteers arrive shortly thereafter and start hauling boxes of food out of the freezer. Students cook hot dogs and form assembly lines where cooked franks are placed in buns and wrapped in color-coded foil.

Ninety minutes before kickoff, FedEx Field's gates open to the public. During what Varrone calls "the pre-game rush," every student reports to the counter so that customers can buy their food quickly. Many of the students have never worked a cash register before, so veterans like Senior Paul Ishimoto, volunteering for the second time, assist the new workers.

Ready for some Redskins football

The notes of the National Anthem fill the stadium, and the crowd files into their seats. Inside the booth, Ishimoto brings out a fresh batch of bratwursts, carefully balancing the tray as he struggles with a warming drawer. He shuts his hand in the door, contracting a deep cut in his finger. Yelping in pain, Ishimoto runs to the kitchen sink, rinses his hand and uses a paper towel as a makeshift band-aid.

The first quarter ends, with the Redskins trailing the Vikings by three points, and the consistent flow of customers leaves Ishimoto no more time to nurse his wound.

At halftime, the booth runs out of kielbasa and the workers are desperately in need of more pretzels. Students at the cash register turn down customers while waiting for the latest batch of pretzels to finish cooking. When the batch is ready, most of the pretzels are snatched up for impatient customers before the tray even reaches the storefront.

One of the four beer taps stops working and drunken customers slur words of complaint. Because every student worker is under 21, they are prohibited from touching alcohol. The parent volunteers rush behind the registers, filling orders of thirsty fans.

At the end of the third quarter, the beer taps are turned off and all eyes are on the tied game. Registers close one by one as Blazers count their sales. Disheartened fans exit the stadium and the booth closes on the Redskins' first loss.

Even after the game is over, the booth works into overtime. Varrone takes inventory of food items in the spoils box, where unwanted or unusable food is kept.

According to Varrone, Blair earns 10 percent of the gross income of the booth if it is operated correctly and the inventory matches the sales. Some students count receipts, while others scrub the hot dog rotisserie. Varrone takes on the task of cleaning the grease deposited on the floor from the hot dogs.

Varrone announces that the booth earned about $16,000, and he retreats back to calculations while the heavy-eyed students wander into the empty stadium. Despite the long day of football, fatigue and food, students at the Sept. 11 game agree that they would work at FedEx Field again. "I'll work here again, but only after my finger heals and I've slept," Ishimoto says, sinking down in his chair."

Christina Mullen. Christina Mullen, contrary to popular belief, does not have a mullet. She is an amazing beast who enjoys ballin, running and making beautiful music. Most people worship a god. Christina worships food. She partakes in powwows and picnics on a regular basis with her track … More »