Not even a ravaging tornado could stop 8,000 Aziz Ansari fans from seeing his Homecoming Comedy Show at the University of Maryland (UMD) on Oct. 13. Although there wasn't actually a tornado, the UMD tornado alarms were on the fritz and students were rushed into Cole Field House for their safety. After the so-called "tornado" passed, the comedy show definitely met its high expectations, even if it was a little on the raunchy side. 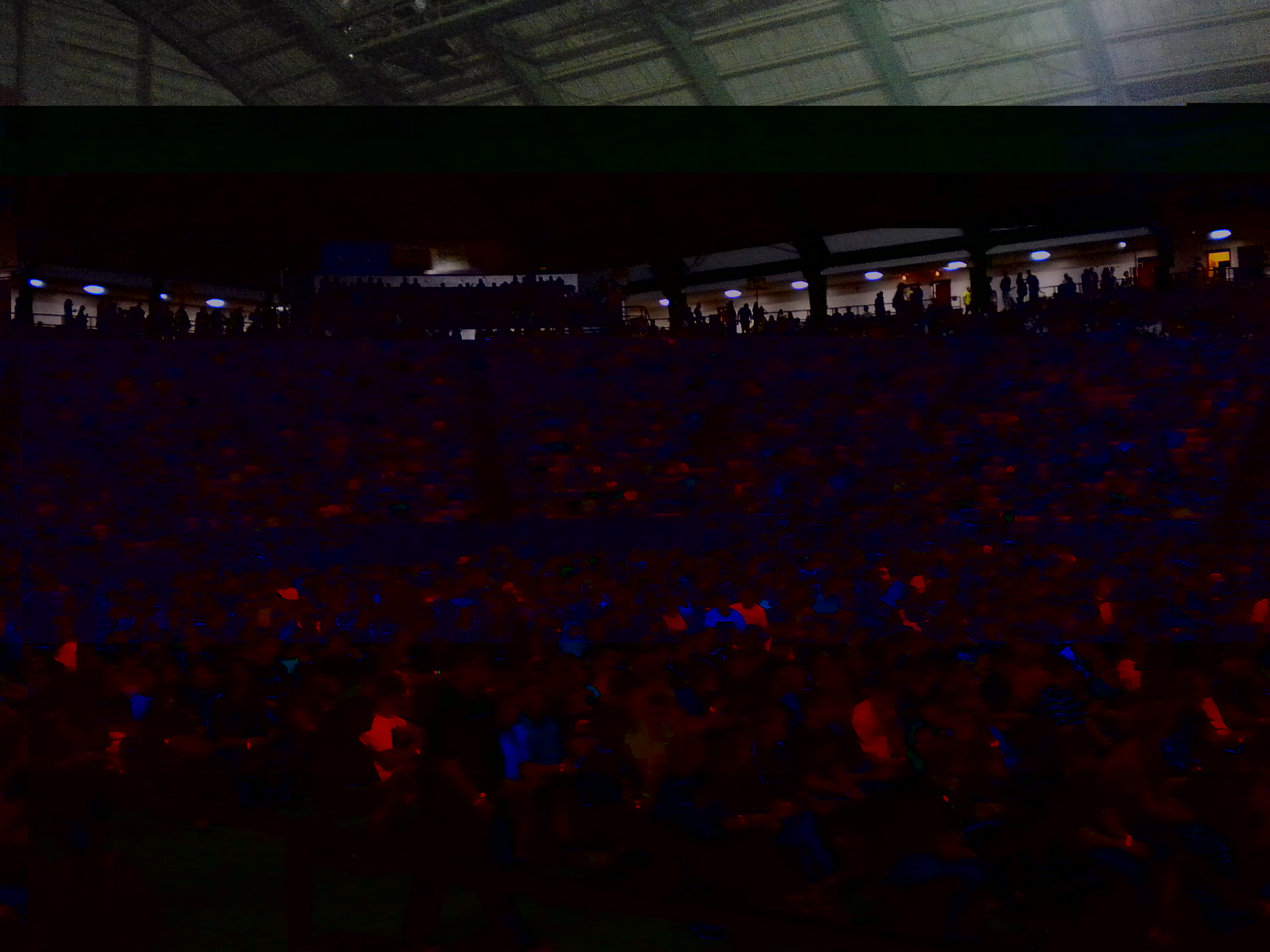 The show began with comedian Max Silvestri, the self proclaimed "less famous one" compared to Ansari. Despite his relative anonymity, Silvestri got some laughs. He clearly had just changed his material to include the weather scare.

Silvestri consistently ended his jokes with the same line: "Sorry, that was gross." His jokes were somewhat nasty, whether it included diarrhea or a disturbing mental image, and there was always an apology afterwards. But there were even more awkward moments to follow. Silvestri had trouble transitioning from one joke to the next, ending some abruptly, skipping the punch line and then asking the audience random questions such as, "Do you guys watch TV?" to get his next story going. Despite a few rough transitions, Silvestri set the stage for the main act, Aziz Ansari.

Ansari was the reason 8,000 people flocked to Cole Field House; every audience member left in a zombie-like state from constant laughter. Ansari walked onto the stage to thunderous applause, to which he thanked everyone profusely for simply wanting him to be there.

Unfortunately, before the show began the security manager announced that Ansari prohibited photography during his act. But Ansari did not let his fans down by proposing a compromise: he would stand on stage, pretend to make a joke and allow the audience to take as many photos as they wanted, but when he actually performed they had to put their cameras away. This was a creative way to handle the situation and thanks to his ingenuity, not one flash that went off during the entire performance. 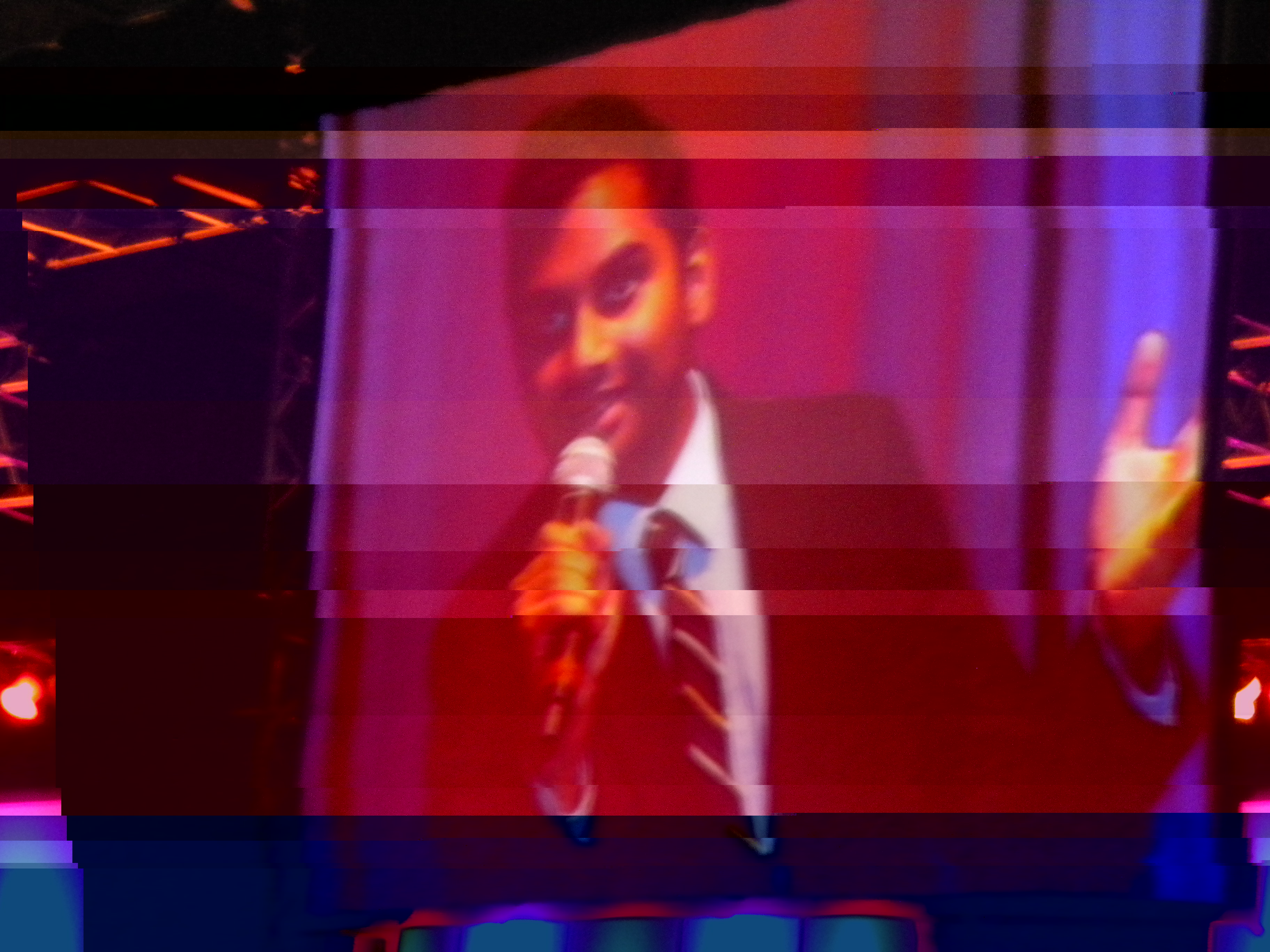 Photo: Aziz Ansari produced a night full of laughter, even if it was slightly inappropriate.

Photo: Aziz Ansari produced a night full of laughter, even if it was slightly inappropriate.

As for the comedy itself, the hilarity that is Ansari did not disappoint. Almost every joke was bound to crack a smile, even if it didn't warrant rolling on the floor laughter. What was already hilarious was enhanced by Ansari's contagious smile and laugh. His high pitched, iconic chuckle involuntarily spread throughout the audience.

One of the highlights of the night was when Ansari talked about his "chubby cousin Harris." He shared Harris' hilarious college essay, in which he wrote about meeting an illiterate person and reflected on how hard he thought it would be to be illiterate, with the crowd. Harris wrote about how he wouldn't be able to text the movie times to his friends or be able to order cheese biscuits at Red Lobster if he couldn't read. Ansari sarcastically commented on each of Harris' outrageous points to show the apparent (and hilarious) flaws in his argument. Ansari then shared a rewrite of his own and even pointed out the fact that everyone knows that the cheese biscuits are complimentary at Red Lobster.

More laughs came from Ansari's reaction to his screaming fans. In the middle of one joke, a girl yelled "Woo!" to which Ansari stopped, started laughing and said, "Why did you just go woo at that point? That makes no sense!" Later, another raving fan yelled very formally, "I am very fond of your work Mr. Ansari!" To which Ansari laughed and semi-seriously said, "That guy is definitely going to murder me later tonight."

Unlike his opening act, Ansari had seamless transitions between jokes and boatloads of material for each subject. The show was very organic and flowed well, which seemingly required a lot of preparation. However, there was one moment where Ansari strayed away from his plan because he realized that he missed a new joke that he really enjoyed. So he backtracked, replayed a joke he had already made and shared another side-splitting story.

The majority of Ansari's material was on the vulgar side, which he noticed and then apologized to the sign language translators who had to translate his dirty jokes. However, despite the tornado warnings and a slightly awkward opening act, Ansari provided a night of non-stop laughter for his fans.

The Aziz Ansari Comedy Show was brought to UMD through Student Entertainment Events. Go to their website and sign up for the list serve to stay updated on upcoming performances and events.