Wal-Mart, the coveted retail giant of America, the crown jewel of rural communities as well as bustling suburbia, has come to Washington. Except this time the company is appearing in front of a whole new audience: the Supreme Court. On March 29, female Wal-Mart employees stated their case against the commercial giant for workplace discrimination. This lawsuit shows that, even though we are country so socially advanced, we have yet to reach equality in the workplace. 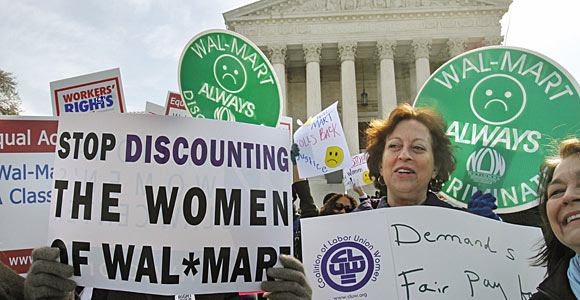 Photo: Demonstrators rally outside of the Supreme Court in Washington in support of the plaintiffs in the Wal-Mart case

Photo: Demonstrators rally outside of the Supreme Court in Washington in support of the plaintiffs in the Wal-Mart case

Dukes vs. Wal-Mart Stores has an astounding number of possible litigants: as many as 1.5 million former and current female employees. In this class action lawsuit, there are only six plaintiffs (some might argue that this is not a representative sample of the number of women that work at the store – something that the Supreme Court will have to decide). This case has been developing for a decade and now is the time for everything it stands for – workplace equality, fairness – to take center stage. Wal-Mart has been under the gun before for controversial workplace practices which have lead to to awareness campaigns such as WakeUpWalmart.com. This time, judicial change may be the result.

This is the largest employment class-action case in history and, although Supreme Court judges are having trouble differentiating between whether paychecks represent discrimination or simply subpar job performances, the case highlights the need to bring workplace equality into the 21st century once and for all. Wal-Mart is a company whose stability is based on its employees and, as long as workers perform their jobs accordingly, they should be treated fairly and paid fittingly, no matter their gender, race or other factors.

The fact of the matter is that in the U.S. women still get paid about 81 cents to every dollar men earn, according to a report by Forbes. Yes, this is unjust, and yes, society has been working this way for centuries, but this statistic shows signs of hope. Just 11 years ago women earned 76 cents to every dollar; so there has been a five cent increase in the 2000s alone. Progress, even as slow as this, is still progress. The Wal-Mart Supreme Court case serves as another wakeup call for America, thrusting the issues of discrimination in the workplace and salary discrepancies back into the limelight.

Twenty-nine percent of all charges filed with the U.S. Equal Employment Opportunity Commission (EEOC) last year were sex-discrimination charges: 29,029 charges filed in all. The women in the Wal-Mart court case are actively seeking change, and their actions should encourage Americans throughout the nation. Break through that glass ceiling, fight for your rights and, most importantly, fight for the rights of those who have no voice. Wal-Mart is a top Fortune 500 Company that traditionally pays its employees less than people working at other supermarkets; it is time for the company to speak up about its misdoings and pave the path for workplace equality. Who knows - maybe if Wal-Mart can do it, the whole world will follow.