A 'Top'-notch meal with a side of Chips

The knife block was ready, the ingredients from a quick trip to Safeway were arrayed on the table and the griddle was sizzling. Natalie and Eli crouched in anticipation in front of Eli's refrigerator. Silver Chips's own version of "Top Chef" - in a decidedly less glamorous Chevy Chase kitchen - was about to begin, and emotions were running high. The timer sounded, and the reporters-turned-cheftestants were off to Eli's six-burner stove to whip up the best bites this side of Bravo.

On each episode of the real "Top Chef," the chefs participate in a Quickfire Challenge, a rapid-fire contest whose winner receives a reward or immunity, and a longer Elimination Challenge. Nobody was going home after the Chips challenges, though; only ego was at stake.

With that in mind, Natalie and Eli launched into their Quickfire Challenge: Create a dish based around one color in 35 minutes. Eli chose red, Natalie chose yellow. As the time ticked away, Eli set to work at tomatoes three ways, while Natalie began a squash quiche.

Eli, focusing on textures, decided to present three mini-dishes of cascading presentation: a grilled vine-ripened tomato with cheese shavings and seasoning, bruschetta with olives and diced grape tomatoes and a puree-style gazpacho.

After a few minutes, Eli completed the grilled tomato and bruschetta successfully and dashed the sizzling beefsteak and golden toast onto two plates. The gazpacho destroyed his false complacency, though, especially because Eli had never made it before and was working sans recipes. He eyeballed the ratio of tomato to cucumber and onion, getting into the no-measurements spirit of, say, Rachael Ray, but was dismayed to find himself without the crucial hot peppers. He blended the ingredients and tasted: It was far too cucumber-y. Racing against time, he desperately crammed more tomatoes into the blender, but the final product was more gazpach-no than anything.

Across the kitchen, Natalie also struggled against time. Less complex than Eli's trio, her quiche nonetheless took a while to prepare. She started frantically chopping butternut and yellow straight net squash and sent them flying into an oiled skillet.

Leaving the seasoned squash to simmer, she turned her attention to her crust. She made it out of crushed crackers and margarine - not the most glamorous ingredients, but she decided a homemade crust showed more integrity. She pressed the crust into a pan and layered her cooked squash, pouring an egg-and-shredded cheese mixture on top. Trying not to glance over at Eli's showy trio, she paced the kitchen, worrying about her delicate quiche in the oven. When the buzzer sounded, her quiche was certainly yellow, and arguably pretty edible, but not the last word in fine cuisine. 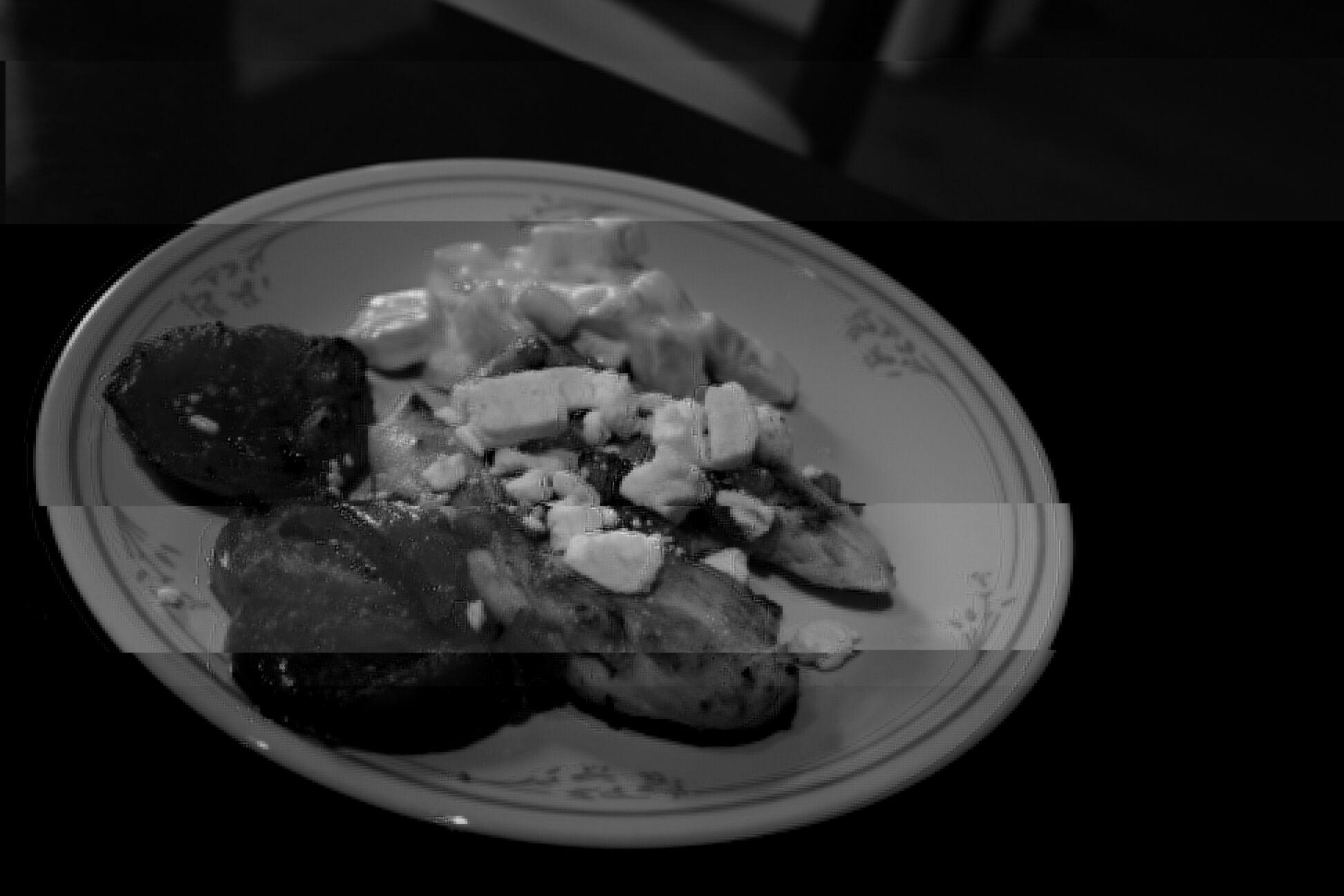 Photo: Natalie's dish is a grilled tomato and chicken platter with tzatziki on the side. She topped the chicken with feta to add Greek flavor.

Photo: Natalie's dish is a grilled tomato and chicken platter with tzatziki on the side. She topped the chicken with feta to add Greek flavor.

Gazpacho failure aside, Eli's trio was the winner - its complexity and taste exceeded those of the quiche. After catching their breath, Eli and Natalie moved to the Elimination Challenge: Create a dish based on five ingredients in a mystery box selected by your opponent. Wary of what Natalie might choose, Eli selected Greek yogurt, strawberries, feta, cucumber and chicken for Natalie to use; he received almonds, cinnamon, cranberries, rice and dried apricots. Natalie went for a personal favorite, chicken with tzatziki, and also decided on a complementary strawberry-yogurt smoothie.

Dashing across the kitchen, Natalie fired up the griddle. After the main dish was underway, she mixed together chopped cucumbers, Greek yogurt, garlic, olive oil and lemon juice for her tzatziki, a Mediterranean dip. As she plated the dish, Natalie felt that she could win, as long as Eli didn't have any tricks up his apron. Feeling confident, Natalie turned her attention to the smoothie. Fruit and Greek yogurt swirled in the blender as the last few minutes ticked away. Suddenly, Natalie had a grave realization: Orange juice was the key ingredient to keep everything blending smoothly. She whipped the top off the blender and added orange juice just in time.

Meanwhile, Eli went for Afghani-style fried rice. He popped a pan of slivered almonds in the toaster and started on the other ingredients. After sautéing the other ingredients, he returned to catastrophe: The almonds had burnt to a crisp. Disheartened, but not dissuaded, he began another batch of nuts - and didn't forget about them. Soon, Eli had a satisfying, simple main course before the timer sounded.

Exhausted, Natalie and Eli slumped over the counter to try each other's Elimination Challenge dishes. Both tasted great - but eventually they agreed that Natalie should secure the win for making the more complex dish. They each won one competition, but they left the kitchen resolved that whipping together a "Top" meal under severe time constraints isn't as simple as it looks on television.