A team of Blair administration and Montgomery County officials participated in the Pedestrian Safety Program's first meeting at Blair on Oct. 12. The goal of the program is to increase pedestrians' safety at Four Corners through increased interaction between officials and Blair students and faculty. 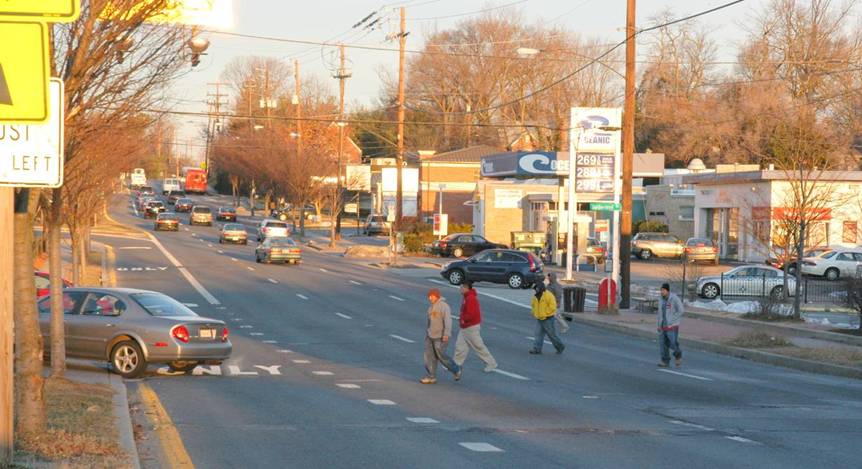 Photo: Jaywalking in Four Corners and crossing streets mid-block has always been a prominent issue with Blair students.

Photo: Jaywalking in Four Corners and crossing streets mid-block has always been a prominent issue with Blair students.

The Pedestrian Safety Program aims to educate the Blair community about pedestrian safety. The group will hold a kick-off event before winter break and will conduct surveys, organize events and hang up posters to involve the student body. "We want to have student input to know what will resonate with them so we can make a difference," Senior Transportation Planner Joana Conklin said.

According to Montgomery County Pedestrian Safety Coordinator Jeff Dunckel, Four Corners underwent a two-day audit in January 2010 to pinpoint specific pedestrian related issues, collect data on the demographics of incidents that have occurred in the area and develop measures to make improvements. Four Corners was the fifth area to be audited due to its high number of incidents.

The team will consider issues like the Corner's overcrowded bus stops, which block sidewalks and create traffic problems. According to Montgomery County Pedestrian Safety Engineer Will Haynes, engineering might play a part in the process as county engineers may try to widen the bus stop area and coordinate with Metro to prevent buses from passing large groups of waiting students.

Haynes also mentioned the possibility of turning the Blair area into a school zone, a precaution which is generally used for middle and elementary schools. This would call for lower speed limits and more crosswalks around Four Corners. Since 2010, other changes have taken place, such as installing updated pedestrian signals and traffic signs, and repaving University Boulevard.

The committee wants to involve the student body in improving pedestrian safety as much as possible. Members of the Student Government Association (SGA) have agreed to participate in the monthly meetings. The committee plans to have creative projects and events in order to communicate their message with the help of students, who will receive Student Service Learning hours for their involvement. 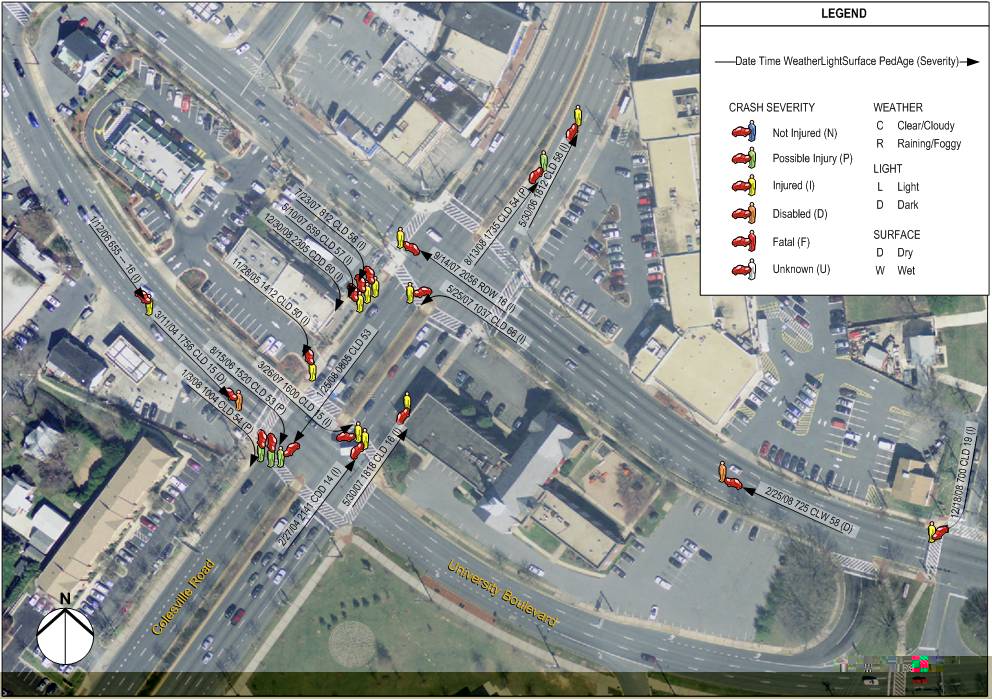 Photo: After conducting the audit of Four Corners, the committee was able to pinpoint the areas where previous incidents have occurred.

Photo: After conducting the audit of Four Corners, the committee was able to pinpoint the areas where previous incidents have occurred.

The number of pedestrian collisions for Montgomery County averages 440 incidents a year, while the total number of collisions for Four Corners was 21 between 2005 and 2010. The majority of collisions in Four Corners involve people younger than 20-years-old and occur during daylight hours, which leads officials to believe that Blair's population may have something to do with the high statistic.

Haynes notes that Blazers' tendencies to jaywalk and ride buses are likely responsible for the high number of incidents around the Four Corners intersection. Haynes stated that it is natural human behavior to cut across a street mid-block. "People do know what the right behavior is, but it's about convenience," Haynes said.

Haynes did add that in many incidents, drivers are also to blame. "It's a 50/50 split on whose fault it is when there is a crash," Haynes said. "Data suggests drivers are more focused on gaps in traffic than pedestrians on the sidewalk."

Any students interested in assisting with the Pedestrian Safety Program should contact Dr. Andrew Coleman, andrew_w_colemaniii@mcpsmd.org. The next meeting will be Monday, Oct. 26 at 2:30 p.m.