Blazers jump to an undefeated start

Before the puck dropped on Blair's Nov. 7 opener against the Rockville Rams, there were many questions about whether Blazer Hockey would even be able to field a team. Due to an unusual influx of underclassmen (see Sasha Tidwell's Sept. 25 story detailing the problem here) the team was under threat from being registered as a multi high school (co-op) team.

Without some key players from other area high schools, the hockey squad would not have been as competitive. The incoming underclassmen were advised by certain senior members to consider joining a Blair sponsored rec-league to keep the core members of the team intact. The senior members of the team insist that they did not force them to join the lower division team, but rather that the younger players opted to join the rec team for the good of the Blair hockey program. Now, over two months after the unsure start to the season, the Blazer Hockey team advanced to 6-0 in conference play

The team's path to becoming the only undefeated in the conference has been a culmination of various different factors that have helped them succeed. Many of the players have been given the opportunity to mold into a more complete force over their four years of highschool, and with a team without any seniors last year, they were able to retain all of their players from last season. Senior Captain Javier Lopez calls the squad more "more experienced this year than last year.” 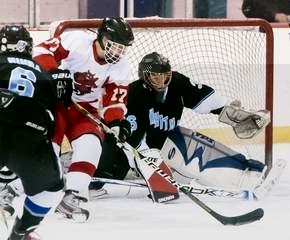 Photo: Blair Hockey has had a good start this season.

Photo: Blair Hockey has had a good start this season. Photo courtesy of Gazette.Net.

As second year team captains Lopez, Max Kronstadt and Sebastian Rubinstein have topped the goal and assist tallies for Blair, and have among the highest points(goals and assists created) in the conference. The three senior captains are the only players to each have points in the double figures, with 10, 15, and 14 points respectively.

Where Blair has grown, both in size and talent, the rest of the division has not, partly because the other teams have not been as strong as in the past. The next best team in the Montgomery County 1A conference is the DC Stars (5-1) who were beaten 10-5 by Blair in the second game of the season. The remaining teams tout under .500 win percentages, with more losses than wins. Junior Reid Williams calls the division somewhat "weak,” but has also pointed to the strong leadership and talent of the senior members that have brought a sense of winning to the team. Williams said "I'm feeling good, and I'm feeling optimistic, but then again we haven't played any super talented teams in the regular season, so we aren't quite sure how good we really are.”

Blair continues to work hard during practices and during the games, and the players stress that there are always elements that can be improved upon. After a challenging preseason tournament, which saw the Blazers lose to Frederick in the final, Lopez said that it was "eye opening to realize that if we want to do big things this year, we really need to make sure that we remain focused and keep working hard.”

As the season progresses, nearing the playoffs and other out of conference tournaments, the hockey team will face tougher opposition. Williams also said that the team needs to do better in "protecting [the team's] goalie,” Sophomore Alexander Zastrow. Williams said the team must improve defensively, because they have "turned the puck over more than we'd want to, and because of that we've been letting in more goals than we would like.”

With only 14 goals scored against them through six games, the lowest in the conference, the Blazer Hockey team, though slightly harsh on themselves, wants to prove to everyone that they are out to play good team hockey.