Suspense films that will have you sleeping with the lights on

Nothing compares to the thrills and chills of an Alfred Hitchcock film. His trademark screeching violins, shadowed cinematography and gripping plot twists have revolutionized the psychological thriller genre and captivated audiences for more than half a century. His penchant for blonde female leads (think Grace Kelly and Ingrid Bergman) and his signature on-screen appearances have become inextricably tied to the filmmaker's reputation. From distinctively dark editing to singularly sinister characters, Hitchcock has earned his place as a cultural icon and master of suspense. 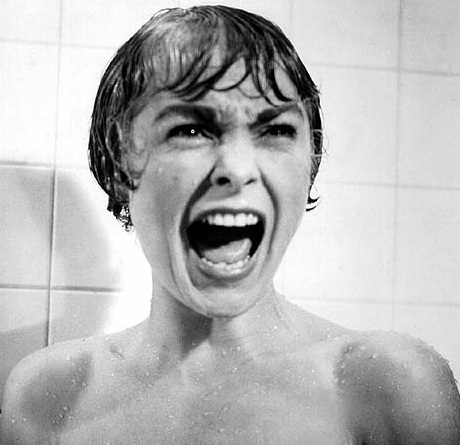 "Psycho" – arguably the director's most famous film – celebrated its 50th anniversary last week. To commemorate the enduring quality of Hitchcock's work, we're taking a look back on his spine-chilling collection. With Halloween coming, you can have your own Hitchcock movie marathon and be sure to hunt for his cameos for an extra treat.

One of the first psychoanalytical thrillers, cult classic "Psycho" ranks as number one on the AFI's "100 Years…100 Thrills" list. When Marion Crane (Janet Leigh) steals from her employer and flees, she stops at the Bates Motel. The proprietor, Norman Bates (Anthony Perkins), is pleased to have a guest and greets her warmly. Later, during the infamous shower scene, Bates' mentally ill mother murders Marion and a horrified Bates discovers the body. As Marion's sister Lila (Vera Miles) and boyfriend Sam Loomis (John Gavin) delve deeper into the murder, the plot evolves into a whirlwind whodunit crime. Although "Psycho" has spawned a number of sequels and remakes, no thriller keeps you guessing like the original. Hitchcock's use of high contrast and shadowing in his camera shots make it impossible for audience to look away, and the film's chilling score, a mixture of stabbing sound-motions and harsh echoes from a string orchestra, is perhaps one of the most iconic suspense soundtracks.

SCOping out Hitchcock: As in every one of his movies, Hitchcock has a signature cameo appearance in "Psycho." Look out for him in the first few minutes of the movie, peering through Crane's office window. 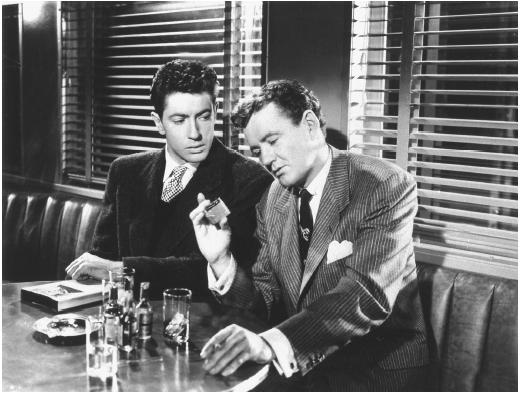 Strangers at a Table

Tennis star Guy Haines (Farley Granger) dreams of marrying the beautiful daughter of a senator, Anne Morton (Ruth Roman) after his messy divorce is finalized. While on a train he meets a friendly stranger, Bruno Anthony (Robert Walker), who despises his overbearing father. The two jokingly agree to "crisscross" murders – Bruno's father in exchange for Guy's wife – to ensure a doubly perfect crime with no apparent motive. But the harmless joke becomes a dangerous game when Bruno, who has been concealing psychopathic tendencies, strangles Guy's wife to death. Though "Strangers on a Train" is an often-overlooked classic, the film includes one of the most memorable murder scenes in the Hitchcock canon. The entire strangulation of Guy's wife is reflected in her glasses, giving her death a blurred yet graceful feel. The elaborate film sets, particularly the whirring merry-go-round, and Hitchcock's meticulous attention to detail make "Strangers on a Train" a fan favorite.

SCOping out Hitchcock: Watch out for him in the beginning of the movie, boarding the train with a cello case.

"Dial M for Murder" is a classic story of love gone awry. Professional tennis player Tony Windice (Ray Milland) discovers that his wealthy wife Margot (Grace Kelly) has been having an affair with American crime-fiction writer Mark Halliday (Robert Cummings). Motivated by jealousy and hatred, Tony blackmails his fellow Cambridge alum, the ne'er-do-well C.A. Swan (Anthony Dawson) into murdering Margot. Tony plans every detail of the murder – Swan is to sneak into the house, hide behind the drapes when the telephone rings at precisely 11 o'clock, murder Margot and then open the window so that it appears to be a burglary. But when Tony's meticulous murder takes an unexpected turn, the scheme becomes worthy of Halliday's crime novels. Based on a successful stage play, "Dial M for Murder" embodies the classic Hitchcock plot twist. In fact, Hitchcock alluded to the pivotal murder scene when he said, "As you can see, the best way to do it is with scissors." Sickeningly, Hitchcock has a penchant for murders involving everyday objects, which makes the killings all the more chilling.

SCOping out Hitchcock: Look for him in an old college photo with Tony and C.A. Swan. 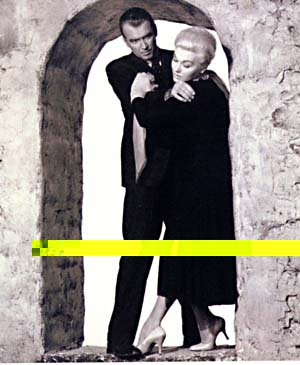 "Alfred Hitchcock engulfs you in a whirlpool of terror and suspense," reads the movie's tagline, and "Vertigo" could not be summarized any more perfectly. Acrophobic Detective John "Scottie" Ferguson (James Stewart) is hired to follow Madeline (Kim Novak), a possessed woman with an odd infatuation for her unknown great-grandmother. The deeper Scottie gets into the case, the more obsessed he becomes with his subject. When he takes Madeline to the church that has been haunting her dreams, she runs to the top of the bell tower and Scottie – paralyzed in a state of vertigo – is forced to watch helplessly as she jumps from the tower. As time passes, Scottie meets a new woman with an uncanny resemblance to Madeline, but can't seem to shake the bell tower incident from his conscience. Filled with exciting plot twists that will leave you speechless, "Vertigo” originally opened to mixed reviews but has gained a cult following over the past 50 years. The film is an astonishing psychological thriller that defined Hitchcock's career and redefined the thriller genre.

SCOping out Hitchcock: During the first few minutes of the film, he strolls down the sidewalk and past a shipbuilding company. 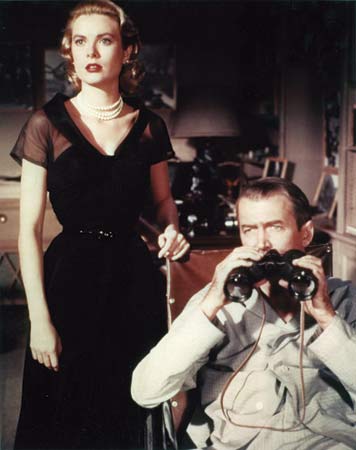 Photo: L.B. Jeffries and Lisa Fremont look out suspiciously over the apartment complex.

Shot entirely within a Greenwich Village apartment complex, "Rear Window" treads the thin line between people watching and neighbor-stalking. After professional photographer L. B. "Jeff" Jeffries (James Stewart) breaks his leg, he is confined to his apartment with only his wealthy girlfriend Lisa Fremont (Grace Kelly) for company. He takes up watching his tenants, including Lars Thorwald (Raymond Burr), a salesman with a bedridden wife. But when Jeff spots Thorwald cleaning a knife not long after Thorwald's wife disappears from her bed, Jeff suspects foul play. "Rear Window" takes suspense to another level, with an experienced Hitchcock at the helm. Besides the well-executed (now retro) special effects, the film uses a variety of harrowing camera shots from Jeff's perspective and plays on suburban life with a memorable cast of tenants (referred to as Miss Lonelyhearts, Miss Torso and so on). Hitchcock's theme of "It could happen to you" acts as a connective thread between his films, but is most apparent during the pivotal scenes of in "Rear Window," when audiences can't avoid the nagging feeling that they're being watched.

SCOping out Hitchcock: He appears an hour into the film, winding the clock inside of the songwriter's apartment. 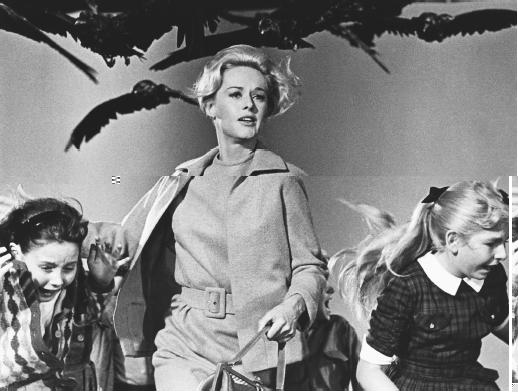 "The Birds" turns something that is seemingly harmless and ubiquitous in everyday life into something terrifying, the film's namesake: birds. Jet-setting rich girl Melanie Daniels (Tippi Hedren) has never paid much attention to birds – that is, until she journeys to Bodega Bay, California, to surprise her new friend Mitch Brenner (Rod Taylor). While crossing the Bay, she is attacked by a swooping seagull, an event that foreshadowing the chaos to come. Soon, all of the birds in the town begin acting strangely. They peck townspeople and children until the unsuspecting victims bleed, break into houses and even kill a woman in a flurry of claws and feathers. Hitchcock succeeds in turning these flying creatures into menacing monsters and killing machines, chronicling a terror so real that viewers can't help but to cringe upon seeing a bird outside. From the plot to the cinematography, "The Birds" is suspense gold.

SCOping out Hitchcock: Search for him at the start of the film, walking two dogs in front of the pet store.