Ancient treats for a modern mouth

Rice pudding will always be in fashion

Few treats have managed to withstand the test of time so well as the terrifically tasty and absurdly simple-to-make rice pudding. In Scandinavia, the dessert is a festive Christmas dish. In Asia, where the goody originated, various recipes have come to include fruit, honey or other additions over hundreds of years. Ancient Romans used rice pudding with goat's milk as a medicinal remedy for certain health problems. Here in the good old U.S. of A, however, Silver Chips Online recipe-mongers can use the versatile pudding as a fabulous start, finish or centerpiece for your next meal in, out or on the go. 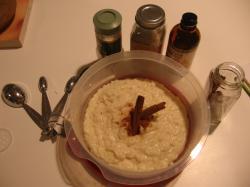 Prep time is about 45 minutes. Makes about 4 servings.

1. Gently pour the milk and rice into the saucepan. Leave the mixture on high heat, stirring frequently, until the milk comes to a boil.

2. Once the mixture has visibly boiled, turn the heat down to 'simmer.' Stir frequently for 30-35 minutes until the pudding has become thick; remember to scrape down the sides often to prevent burning. By the end of the half hour, there should be little milk left.

3. Carefully remove the pan from the heat. Stir in the sugar, vanilla, raisins, salt and cinnamon.

4. Place the pudding in the bowl, garnishing with any assorted fruits. Cover the bowl with plastic wrap or tin foil for safekeeping.

5. Refrigerate the pudding until chilled (suggested time: three hours). Serve at once.