Are Blazzzers getting enough sleep?

When quarantine started, Blazers and students around the nation rejoiced at the thought of being able to sleep in every morning. Nine months later, it turns out that many Americans are still struggling with sleep, despite the extra time. How are Blazers sleeping these days, and how does it compare with the rest of the nation?

During quarantine, more and more Americans have been suffering from “coronasomnia” - chronic insomnia caused by stress during the pandemic. Coronasomnia can affect all age groups, including high school students.

In June, researchers at the National Institutes of Health conducted a study on how Americans were sleeping during the start of quarantine, as well as the pandemic’s effects on mental health overall. “The main findings, as expected, revealed very high rates of clinically significant insomnia (20%), acute stress (15.8%), anxiety (18.5%), and depression (24.5%),” researchers Charles Morin and Julie Carrier write.

Coronasomnia is caused primarily by stress, which has worsened significantly during the pandemic. The COVID-19 virus itself has caused many to worry about the health of their families and themselves, and for the 15.9 million Americans who lost their jobs due to the pandemic, financial struggles only add to their stress.

Another cause of coronasomnia is a lack of stimulation in our daily routines. During lockdown, a lot of normally exciting activities (like going to the movies or going to a restaurant) became impossible. Citizens are confined to staying home, and according to Dr. Angela Drake from UC Davis Health, that lack of outside stimulus is a big reason for coronasomnia. “As human beings, we need some stimulation. We need some variety in our activities. When our lives become so repetitive, the lack of stimulation and activities contributes to poor sleep,” Drake says.

For a lot of Americans, working from home has also led to broken sleep habits. Many people are working and sleeping at drastically different times than before, and sudden changes in our sleep schedules mess with our circadian rhythms. The more you change your sleep schedule, the harder it is for your body to adjust, making it harder to fall asleep.

Because of this, general sleep quality in the U.S. has been going down in the past few months, based on research done by the American Journal of Managed Care. For most students, however, online school has allowed for more and better quality sleep than before quarantine, while still enforcing a normal sleep routine. 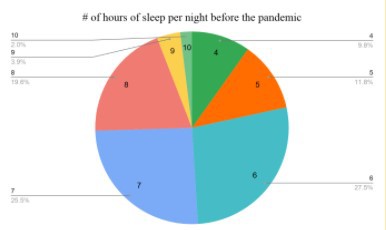 Sleep before the pandemic.

Photo: Sleep hours before the pandemic.

Photo: Sleep hours before the pandemic.

According to the American Academy of Sleep Medicine, teens should average between 8-10 hours of sleep per night. However, only 25 percent of surveyed Blazers met these recommendations before quarantine, which aligned with national studies that showed 70 percent of high schoolers weren’t getting recommended amounts of sleep. 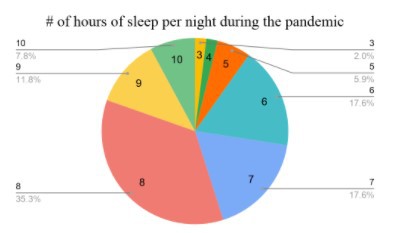 Sleep during the pandemic

Photo: Sleep hours during the pandemic.

Photo: Sleep hours during the pandemic.

This is mostly thanks to the later starting time of online school (from 7:45 am to 9 am), which accounts for the hour increase in Blazers’ average sleep per night. Furthermore, regulated start times for school prevents students from sleeping in too much, while still allowing them to get more sleep than before.

For freshmen, transitioning from middle to high school is often difficult due to the higher levels of stress. Having the chance to get extra sleep during online learning has helped them balance their stress levels and ease them into the high school experience. 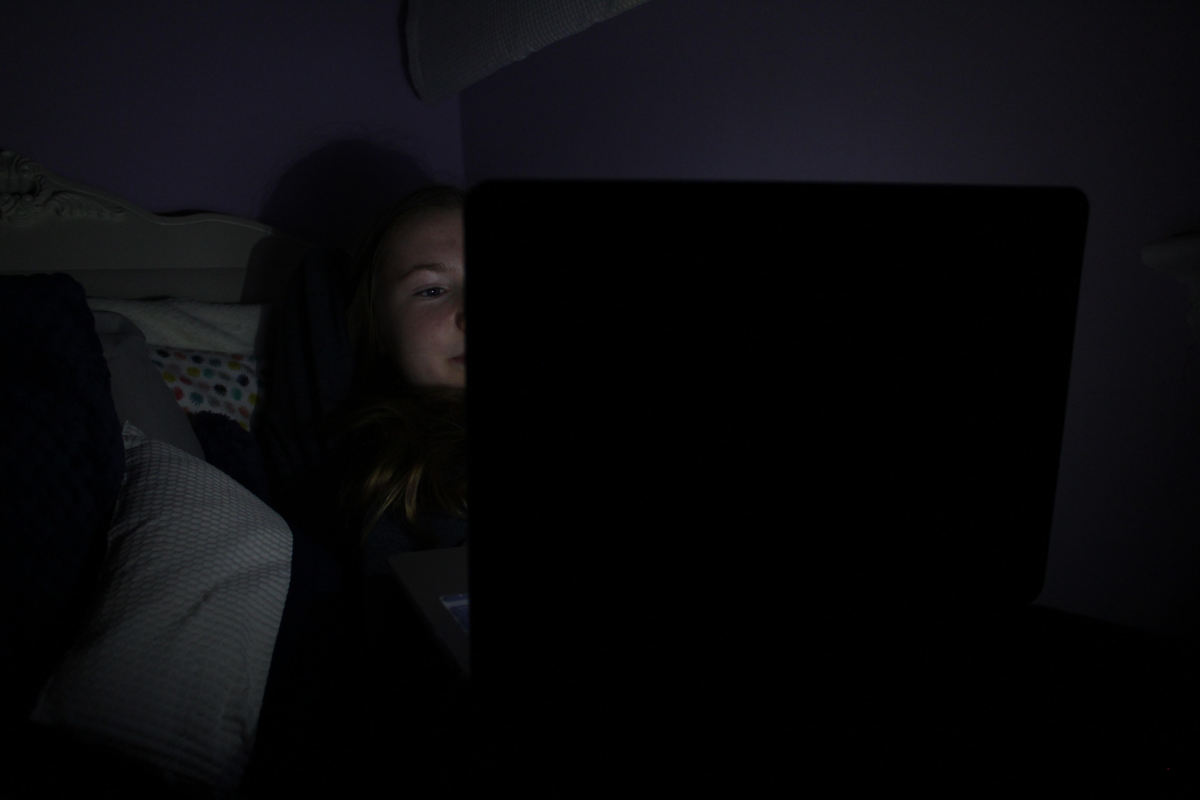 Photo: Blazers are getting more sleep nowadays thanks to delayed start times during online learning (image courtesy of Isabelle Megosh)

Photo: Blazers are getting more sleep nowadays thanks to delayed start times during online learning (image courtesy of Isabelle Megosh)

Likewise, for Blazers who struggled with balancing healthy sleep schedules before the pandemic, quarantine has allowed them to gradually find a better way to sleep well. For senior Anika Dasgupta, even though her workload has increased significantly this year, quarantine has still allowed her to get more sleep than before. The delayed start time has allowed her to nearly double her average sleep per night, and she feels a lot more focused with the extra sleep. “Instead of sleeping from 3 a.m. to 6 a.m., I'm sleeping from 3 a.m. to 9 a.m. Now I don't literally pass out during class because I'm tired,” Dasgupta says.

As we continue into our second quarter of online school, getting enough good quality sleep remains just as important as before. So far, the majority of Blazers have been sleeping well during quarantine and are doing a good job of balancing stress and maintaining good sleep schedules. Let’s make sure to keep it up!

Katalina Li. Hi there! I'm Katalina and I'm a sophomore. When I'm not writing articles, I'm usually binge-watching Gordon Ramsay shows, thinking about what to eat next, or working on homework while listening to music :) More »