Last season, "Arrested Development" proved to be one of the best comedies to grace network television in a long time. The show kept getting better and won an Emmy for best comedy thanks to its over-the-top humor and excellently written episodes. Based on the latest episode, it looks as though the second season of "Arrested Development" is going to be just as great as the first.

This season starts off with Michael Bluth (Jason Bateman) and his son George-Michael (Michael Cera) leaving the unbelievably mad Bluth household. Throughout last season, Michael acted as the voice of reason for the dysfunctional Bluths after the head of the family, George Bluth (Jeffrey Tambor), was imprisoned for his illegal practices heading the family's company. 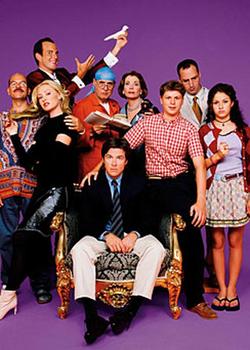 Photo: The Bluths are back to their zany ways once again!

Photo: The Bluths are back to their zany ways once again!

Leaving the Bluths isn't as simple as Michael would hope. In the beginning of his attempted escape, he asks George-Michael to sit on his lap and drive, assured that there is nothing wrong with letting him do so. A few minutes later, the police have pulled the two over, but this awkward moment isn't anything compared to what's in store for the duo.

Due to the episode's chain of hilarious coincidences, Michael is ultimately forced back into the crazy world that is his own family. Some notable events that bring Michael back to the Bluths include a visit from George's brother, Oscar (also played by Tambor) and a tongue-in-cheek scandal that involves business relations between the Bluths and Saddam Hussein.

The episode plotline isn't limited to just Michael's issues with his family. A comical side story concerns the marital issues between Michael's sister, Lindsay (Portia De Rossi) and her husband Tobias (David Cross). One example of the couple's humorous problems includes the clueless Tobias attending a performance by "The Blue Man Group" because he believes that it is a support group for depressed men.

The excellent cast of "Arrested Development" makes the intriguing characters fascinating. However, the season premiere does not feature enough of some of the show's finest characters, such as the grown-up mama's boy Buster (Tony Hale) or the über-tyrant mother of the family, Lucille (Jessica Walter). However, with plenty of time left in this season, "Arrested Development" will hopefully let each character create their own remarkable segments in upcoming episodes, as was the case last season.

"Arrested Development" occasionally uses third-person narration to set up scenes as well as to add a sense of irony in scenes where the neutrally toned voice describes some of the show's craziest situations. Visually, the show uses simple cinematography but has excellent editing, including the use of flashbacks and clips from previous episodes to give humorous context to much of the family's frequent arguments and banter.

Judging by this season's premiere, "Arrested Development" is going to be just as attention-arresting as it was last season.

"Arrested Development" is rated TV-PG and airs Sunday nights at 8:30 p.m. on FOX.