Celebrities are human and they are bound to make mistakes. But it's how a celebrity handles the situation and owns up to their faux pas that separates a respectable celebrity from a trashy one.

Last Thursday, Ashton Kutcher made a mistake when he tweeted, "How do you fire Jo Pa? #insult #noclass as a hawkeye fan I find it in poor taste." Kutcher was referring to the Penn State football coach who was fired as a result of a sexual abuse scandal surrounding his former defensive coordinator, Jerry Sandusky. 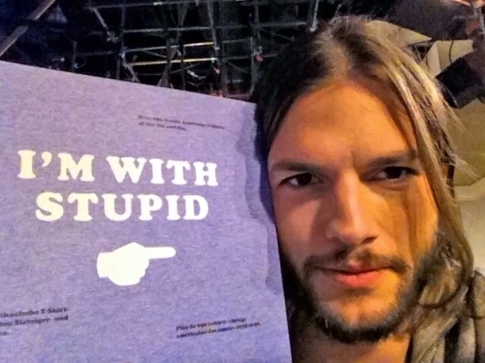 Immediately following Kutcher's tweet, the Twitter world broke out in outrage. Most of his followers were criticizing Kutcher for defending 84-year-old Paterno who was let go because he knowingly didn't respond to allegations against Sandusky.

Kutcher is a popular Twitter celebrity and his tweets are sent to over eight million followers. Every tactless statement he says is magnified due his large number of followers. And although there is no doubt that Kutcher messed up, he handled his mistake admirably.

Kutcher quickly realized his faux pas when thousands of Twitter users became enraged at his comment and he apologized immediately by tweeting, "Heard Joe was fired, fully recant previous tweet! Didn't have full story. #admitwhenYoumakemistakes." Shortly thereafter, he posted a picture of himself with a poster that said "I'm with stupid," acknowledging his impulsive tweet with slapstick humor to lighten what could have been an extremely awkward situation.

Kutcher's solution to his social blunder is to hand over the reins of his Twitter to his management. Although I appreciate him taking the necessary steps to prevent another slip-up, this is upsetting to say the least. Part of Twitter's charm is the idea that ordinary people can follow celebrities and catch a glimpse into their personal thoughts and lives. The fact that Kutcher will be allowing his "people" to update his feed completely defeats the purpose. His tweets may no longer be taken at face value because his thoughts will now be deemed either approved or too inappropriate and his tweets won't be his raw thoughts.

The Kutcher's mistake only proves that he was the one updating his Twitter – it was purely his free and random thoughts. Being able to read his unyielding, maybe even inappropriate comments is worth more than reading tweets that are considered politically correct.

Kutcher would be making a mistake by turning over the management of his Twitter feed. People sometimes say the wrong thing – it's a fact of life – but the point of Twitter is to share thoughts with the world, even if they aren't always completely accurate or merited.