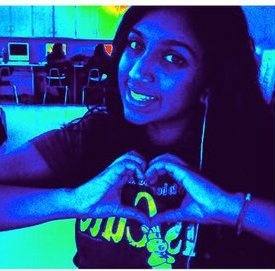 Name: Janvi Raichura
Position: Online News Editor
Graduation Year: 2013
I am a junior. My life is tennis, debate and SCO. I love singing. My brother is my world. Taylor Swift is probably the greatest song writer ever. I'm loud and goofy.

A two and a half year old girl from Mississippi is the first child, and the second person in world, reported to have been cured of the human immunodeficiency virus (HIV).

At the end of the first semester, Vice Principal Andrew Coleman announced his retirement, leaving Blair with a vacant vice principal position. Blair teacher William Currence has filled as interim vice principal for the remainder of the year.

On Oct. 22, senior Beemnet Kebede was one of 14 girls in the nation awarded a $1,900 grant through the ANNpower Vital Voices Initiative.

Now that we're past Black Friday the holiday season has officially started and that means cold winter nights spent curled up by the TV watching holiday movies.

Breaking Dawn: Ending the Twilight Saga with a burst of sunshine

Even with the excessive blood bath throughout "Breaking Dawn - Part 2," the movie was surprisingly enjoyable, and it was a bloody good end to the Twilight Saga.

As the Sci-Fi TV show "Fringe," created by J.J. Abrams, enters its final season, fans may be feeling a little bittersweet.

Couch Potato: A Community of Whovians

There are over 500 television shows that play every day all over the world. Recently, British TV in particular has become popular in the U.S. One show that has created an increasingly large American fan base is "Doctor Who."

Fall TV preview: the good and the bad

Television takes up so much time, so we're here to review the top shows this fall.

Sean John Combs, also known by his stage name P. Diddy, is one of America's richest and most famous hip-hop and rap artists. His net worth is said to approach nearly $550 million. Diddy's 18-year-old son, Justin Combs, will attend University of California, Los Angeles campus (UCLA) next year on a $54,000 scholarship, one of the 285 athletic scholarships that the university hands out every year.

A new Costco retail store and attached discount gas station are scheduled to open this October at the Westfield Wheaton mall. However, plans to construct the gas station are being heavily opposed by the Montgomery County Council and local residents.

Last Thursday and Friday, Blair's crew team competed in the largest American high school regatta of the year, on the Schuylkill River in Philadelphia. As a member of U.S. Rowing, Blair entered the regatta for the second year in a row. Girls Junior 4+ placed 31st out of 61 boats, Girls Senior 8+ finished 21st out of 36 boats and Boys Senior 4+ beat nine other boats.

Following an emotional Senior Night ceremony decked with colorful leis, balloons and bouquets of flowers, the Blair boys' volleyball team (10-1) got ready to take on the Churchill Bulldogs (7-4). After Blair's seniors took the court, senior Rick Narcisse pitched the volleyball over the net on the opening serve. When Churchill bumped it back over the net, senior Andy Zhang slammed the ball home, setting off a chain of plays that led the Blazers to a resounding win on Friday night. Blair eventually defeated Churchill by final scores of 25-10, 25-10 and 25-17.

The boys' varsity volleyball team (7-1) won its fifth home game against the Poolesville Falcons (4-4) with final scores of 25-16, 25-11 and 25-17. Despite struggling with their serves during the last two sets, the Blazers were able to defeat Poolesville with their aggressive and clever playing.

Bobby Petrino got fired, but Jessica Dorrell got wrecked

Last Wednesday, University of Arkansas's head football coach Bobby Petrino was fired due to his fling with 25-year-old, Jessica Dorrell, Arkansas's Student Athlete Development Coordinator. The two were caught in a motorcycle accident on March 31st, which left Petrino completely damaged. Not only did Petrino suffer from a broken rib and cracked vertebra, he also lost the $24.92 million he was set to earn during his 7-year contract with Arkansas, and, of course, his mistress.

The boys' varsity volleyball team (4-1) won its third home game against the Northwest Jaguars (0-3) with final scores of 25-11, 25-11 and 25-12. Despite struggling with their passing and losing focus, especially during the last two sets, the Blazers were able to completely destroy Northwest with their aggressive and clever playing. Since the Jaguars arrived to the court later than expected, prior to the game, junior co-captain, Ricci Huang was extremely confident going into the game. "We're all feeling confident because of the extra practice we get until they arrive, plus they're not the best of teams so we're definitely aiming for a clean win," he said.

Despite struggling with their serves, especially during the last two sets, the Blazers were able to completely destroy Einstein thanks to their aggressive play.

The Maryland State Highway Administration will resume its two-year bridge rehabilitation project on the I-495 Northwest Branch Bridge between New Hampshire Avenue and University Boulevard.

The boys' varsity volleyball team fell to the Wootton Patriots in the season opener by a final score of 25-21, 25-21, 23-25, 18-25 and 17-19. Although the Blazers took the first two sets, they grew comfortable with their lead which ultimately led to their defeat.

Last week, Blair's school store reopened after previously shutting down due to a lack of funding. The store is run exclusively by students in the Blair Entrepreneurship Academy.

The girls' varsity basketball team destroyed the Bethesda-Chevy Chase (B-CC) Barons by a score of 60-40. Although the Blazers were down by five points at halftime, they were able to pull together as a team and get the win.

The girls' varsity basketball team (18-4) destroyed the Einstein Titans (5-15) Tuesday night by a score of 62-33. The girls played with high intensity and energy throughout the game to finish Senior Night on a positive note.

Death is a natural occurrence of life and spreading rumors is a natural human instinct. But now, thanks to social media and Twitter, death rumors are becoming a normal incident.

Last Monday, during his monthly appearance of "Ask the Governor" on WTOP, Governor Martin O'Malley proposed a six percent sales tax on gasoline in addition to the existing tax on gas, currently set at 23 cents per gallon. Under O'Malley's proposition, the gas tax would no longer be exempt from state sales tax, which would increase by two percent each year for the next three years.

The girls' varsity basketball team (14-3) destroyed the Clarksburg Coyotes (8-10) on Tuesday night by a score of 61-26. The Lady Blazers were on fire the entire night—applying offensive intensity and superb defense—giving up just nine points to the Coyotes in the first quarter.

"Man on a Ledge" will make you jump

"Man on a Ledge" has a title that pretty much sums up the main theme of the movie.

Although the State of the Union address did not pack the usual Obama punch, he outlined his plans to turn the country's ecomony around.

The Snow Day, capitalized out of respect, is one the most revered, yet enigmatic, days in a student's calendar. But if we all work together and follow a few simple tasks, we can make it snow!

The girls' varsity basketball team (10-2) destroyed the Kennedy Cavaliers (8-6) on Saturday morning by a score of 71-49. Though they struggled defensively in the first half, the Lady Blazers maintained a steady lead throughout the game.

On Jan. 4, three local elementary schools – Cannon Road, Garret Parks and Seven Locks – reopened after undergoing renovations for the past year and a half. The $50 million project, funded by Montgomery County Public Schools (MCPS), was completed on schedule and all three schools reopened on time.

Breezing past the records

The girls' varsity basketball team defeated the Quince Orchard Cougars by a score of 74-62. Johanna Lopez led all scorers with 31 points.

The girls' varsity basketball team defeated the Northwood Gladiator by a score of 69-40. Senior co-captain Johanna Lopez led the way as the Lady Blazers cruised to their first win of the season.

The girls' varsity basketball lost its season opener to the Gaithersburg Trojans. Blair's high energy and passion weren't enough to overcome a strong second half push by the Trojans, leading to a 65-53 loss for the Lady Blazers.

Local H&M stores will unveil the highly anticipated Versace collection tomorrow, and the excitement building around the launch is infectious. This line is intended to serve as an antidote to the floundering economy.

Celebrities are human and they are bound to make mistakes. But it's how a celebrity handles the situation and owns up to their faux pas that separates a respectable celebrity from a trashy one.

Last Friday, Wang Yue, a two-year-old Chinese girl was killed after two cars hit her. According to officials at Guangzhou Military Hospital, Yue died as 18 bystanders observed the tragedy but did nothing.

Pink wristbands inscribed with the words "Hope, Faith, Strength and Survivor" are making their way along Blair Boulevard.

An 'Abduction' of greatness

From his rock-hard abs to his sultry face, Taylor Lautner is undeniably attractive. But he is unable to pick movies that showcase his acting talents, rather than his body. With a shaky plot and convoluted story line, "Abduction" fell short of expectations.

With SCO's inside scoop on our favorite returning shows and the most hyped premieres of this season, this guide will help you prioritize your DVR list.

The bill, which Council President Valerie Ervin proposed on July 26, was up for debate this past Thursday, but the decision was rescheduled for an undetermined date in November.

President Obama will be there, former President George W. Bush will be there, as will former New York City (NYC) Mayor Rudolph Giuliani and current Mayor Michael Bloomberg. But the 90,000 police officers, firefighters and civilian volunteers, who fought to save the lives of the innocent victims, have been denied access to the site on this historic day.

Discovering love and friendship "One Day" at a time

"One Day," despite hiccups in its sequence, is a very real, romantic movie that is true to human character.

On July 1, Montgomery County will reinstate the Kids Ride Free (KRF) policy for all Ride On buses and a majority of Metro buses. The program, which is returning from a year long hiatus, allows students 18 and under to ride free of charge.

"Pretty Little Liars" may not be so pretty anymore

The show includes the regular (and meaningless) boy drama that all teen drama shows have, but adds a twist through a mysterious, unidentified character, "A," who cyber bullies the four main characters.