Blair could win up to $10,000 for the music department 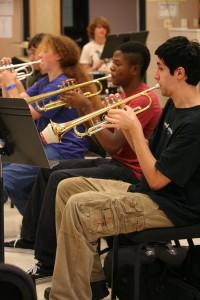 Photo: The Blair Instrumental Music Program has a chance to win up to $10,000.

Photo: The Blair Instrumental Music Program has a chance to win up to $10,000.

The Grammy Signature School Program, founded in 1989, fosters excellence in music education by granting annual awards to public high school music programs across the country. According to Grammy School President Neil Portnow, Blair was selected as a semifinalist because of its artistic excellence and dedication. "Each of these semifinalist schools should be commended for their commitment to keeping the arts in their curriculum for the long term benefits of their students," he said in a recent news release.

Blair was one of the four high schools in Montgomery County to be named a semifinalist, along with Bethesda Chevy-Chase, Walter Johnson and Winston Churchill. Junior jazz cellist Ellie Musgrave believed that Blair deserves the money because the music program is struggling with a lack of funding compared to the other nominated schools in the County. "Those schools are much better funded than we are in terms of music; the Blair music program has almost no funding," she said.

Junior cellist Nicole Choi was impressed with Blair's progress. "I didn't really expect us to win, or even make it this far," she said, mentioning the fact that Blair did not win the music competition sponsored by Fox's hit TV show, Glee, which would have granted Blair $1,000,000.

Musgrave said that if Blair continues on to become a finalist and win prize money, the money would go towards acquiring new sheet music for the band to play. "It would depend on what Ms. Roberts wanted to do with the money, but it would most likely go towards new music as well as instruments in need of repair," Musgrave said.

Both Choi and Musgrave believe that Blair has a good chance of advancing to the finalist round. "I have faith in our music program," Musgrave said. "We are worth it."