Pink wristbands inscribed with the words "Hope, Faith, Strength and Survivor" are making their way along Blair Boulevard. At lunch, groups of students donate money to the club iCare, which is selling the bands for a dollar in hope to find a cure. Many students have bought at least one wristband, some have bought two or even three. October is Breast Cancer Awareness Month and pink is its color.

According to the U.S. Breast Cancer Foundation, approximately one in eight women will be diagnosed with breast cancer in their lifetime. This means that millions of kids across the globe will have a mother, sister or grandmother who is affected by the disease.

Raising awareness about the symptoms, treatments and dangers of breast cancer is the single most important thing that anyone can do, according to the U.S. Breast Cancer Foundation. Blazers have ran with this advice and raised awareness throughout October. iCare President, junior Rebecca He, arranged to sell wristbands at lunchtime to do more than raise money for research. "Last week iCare was selling pink wristbands during both lunches, outside the SAC. Not only did the profits made from the bracelets go to breast cancer research, but we also helped raise awareness for breast cancer at Blair," she says.

When cancer hits close to home 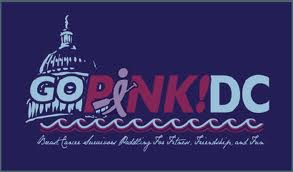 Photo: Felber's mother is on Go Pink! DC, a dragon-boating team which rows to raise awareness about breast cancer.

Photo: Felber's mother is on Go Pink! DC, a dragon-boating team which rows to raise awareness about breast cancer. Photo courtesy of gopinkdc.com.

But there are those who have been directly affected by breast cancer, and everything that comes with it. Senior Justin Kaplan-Markley lost his mother to breast cancer at a very young age. She had breast cancer for four years, fought and survived, but passed away after relapsing five years later. Although Kaplan-Markley experienced this loss at a young age and does not remember understanding what was going on, he believes that people should be more aware of breast cancer, regardless of what month it is. "I like [Breast Cancer Awareness] Month but everyone should always be aware of its severity because it's a really serious thing," Kaplan-Markley says.

Like Kaplan-Markley, Junior Lily Felber's mother also battled with breast cancer. Felber was in third grade at the time and her mother survived. Through her mother's struggle, Felber has become more involved in the breast cancer awareness movements. Felber and her mother participate in walks, such as Search for the Cure, and on Oct. 29, the two will volunteer at the Making Strides walk in D.C., which raises money and awareness about breast cancer. Felber's mother is also part of a dragon boating team that raises money to donate to breast cancer research. Her mother's dragon boating team, "Go Pink! DC," rows all over the D.C. Metropolitan area and so far it has raised over $16,000 to donate to breast cancer research.

As grateful as Felber is for Breast Cancer Awareness Month, she believes that other cancers should have equal recognition. "I think breast cancer month is fantastic. However, I think that other cancers need to be recognized, too, like ovarian cancer or lung cancer," she says.

Both Felber and Kaplan-Markley have both endured the painful experience brought on by breast cancer, but both have come out of their situations a little wiser. They both believe that their experiences have taught them to appreciate life in its entirety.

Kaplan-Markley does not remember much of what he felt at the time, but when he does remember, he tries to focus on the positive times and not the upsetting ones. "I've just fought through it and remembered all the amazing times I had with my mom," he says. The fight of battling breast cancer is tiring and difficult for both the patient and their loved ones. Kaplan-Markley's advice to anyone who is battling cancer or knows someone who is fighting the disease is to stay strong and never give up. "Everyone deals with pain and/or loss differently but the most I can say is to fight through it," he says.

Felber continues to cherish every moment she gets to spend with her mother. "She's my hero. She went on with her life with a staggering amount of strength. I admire and love her so much and I'm incredibly grateful she's still alive today," Felber says.

After her mother's fight, Felber understands that cancer is exhausting. She and her brother learned to adapt to the situation and would play quietly while their mother was home so that she could sleep peacefully. She also understands the hardships that one must face while they battle cancer and her advice, similar to Kaplan-Markley's, is to stay strong and positive. "Live in the moment and do the things that make you happy," she says. "You'll get through this."