This April, the Maryland State Highway Administration (SHA) is scheduled to resume its two-year bridge rehabilitation project on the I-495 Northwest Branch Bridge between New Hampshire Avenue and University Boulevard. The deck of the current bridge, which was built in 1967, is showing signs of deterioration. 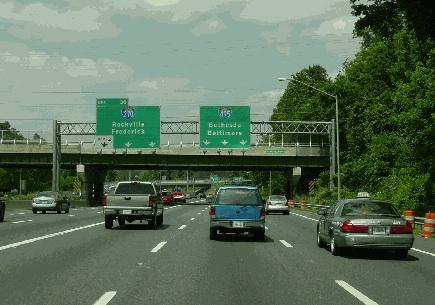 Photo: Work on the rehabilitation of the bridge between New Hampshire Avenue and University Boulevard is expected to resume soon and be completed by this fall.

Photo: Work on the rehabilitation of the bridge between New Hampshire Avenue and University Boulevard is expected to resume soon and be completed by this fall.

This project is part of SHA's bridge preservation and replacement program. The Forestville Road Bridge rehabilitation project will improve the ride quality for nearly 4,000 motorists in Prince George's County who use this bridge each day. SHA will use variable message signs, Jersey barrier walls, drums and arrow boards to guide motorists through the work zone.

Construction began last spring and is on track to finish this fall. The estimated completion date of the project was two years and construction stopped during the winter months due to the low temperature, which prohibited placing the bridge's concrete overlay. The rehabilitation efforts include replacing portions of the existing concrete bridge deck, replacing the traffic barriers and installing new concrete to resurface portions of the bridge deck that will not be replaced. Once bridgework is complete the approach roadway will be resurfaced. Crews will manage construction in eight phases, incorporating multiple lane shifts for the duration of the project.

Traffic pattern changes will include temporary traffic split around the work zone and lane shifts on both sides of I-495. The SHA will detour traffic onto MD 4 (Pennsylvania Avenue) to Forestville Road during ramp closure. However, SHA will maintain all four lanes in each direction by using three travel lanes and both shoulders. Crews will also reduce the width of travel lanes by about 12 feet, improving the ride quality for more than 230,000 vehicles per day and prolonging the service life of the bridge for the next 30 to 50 years.

SHA Administrator Neil J. Pederson believes that maintaining bridge safety is especially important for Silver Spring due to its metropolitan nature. "SHA is continuing to address system preservation statewide, especially for Maryland's bridges in our metropolitan areas that carry thousands of motorists each day," Pedersen said in a recent press release. "By remaining attentive and driving at the appropriate speed through the work zone, everyone, workers and motorists, can arrive at work, home or school safely."

County resident Hayley Goddard is excited about the bridge rehabilitation, because it will make her commute to work smoother. "I drive across that bridge twice a day, everyday, so I'm really excited that it's being rehabilitated,” she said.