Last Friday, Wang Yue, a two-year-old Chinese girl was killed after two cars hit her. According to officials at Guangzhou Military Hospital, Yue died at 12:32 a.m. as 18 bystanders observed the tragedy but did nothing. Officials said it might have been possible to save her life if the spectators had brought her to the hospital earlier. 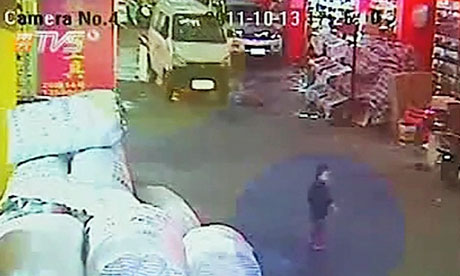 Photo: Two-year-old Wang Yue was run over by two cars and passed by 18 people before she was pulled to safety.

Photo: Two-year-old Wang Yue was run over by two cars and passed by 18 people before she was pulled to safety.

Yue was hit when she strayed into the middle of the street while her mother was shopping. Video surveillance footage shows that numerous people walked by as Yue remained splayed in the middle of the road injured and bleeding. One passerby simply stared at Yue as he walked by. It wasn't until second vehicle hit her that a someone finally pulled her to safety.

The surveillance video has gone viral and has sparked global outrage across the globe, questioning the state of Chinese society. This has also ignited the "Stop Apathy" campaign on Sina Weibo, the Chinese equivalent of Twitter.

I am greatly disappointed in the citizens involved in the tragedy. The truck driver who hit the girl did not stop, get out and check to see what had happened – instead he hit and ran. Then passers-by stared at the injured young child as they walked by, but did nothing to help her. Bicyclists and motorcyclists consciously drove around her. What kind of society has been fostered where running over a two-year-old does not cause people to stop what they are doing and rush to her aid?

The observers' level of indifference potentially caused a two-year-old to lose her life. Hopefully the personal shame and global outrage that this video has brought will alter the way people think and shine light on the fact that humans naturally shy away from getting involved in certain incidents.

Although this was a terrible tragedy, it was not the first of its kind. In 1964, New York City resident Kitty Genovese was stabbed to death in the parking lot of her house while various neighbors and citizens ignored her cries for help. In this case, there were numerous occasions for bystander involvement which could have prevented her death. The murderer began attacking Kitty, stopped, walked away and when no one came to help her, returned and killed Kitty.

The Kitty Genovese story elicited similar reactions of horror and disbelief at the idea that humans could be so apathetic. This time around, the world is blaming the Chinese for their negligent behavior, but this behavior is not constrained to a single country. People's reluctance to get involved and help those around them in crowded areas, a phenomenon called the "Bystander Effect," is a flaw of human nature. Hopefully incidents like Wang Yue and Kitty Genovese's will help rectify this appalling behavior, so that no person will ever be ignored or forgotten.